Another day on the Mississippi.. 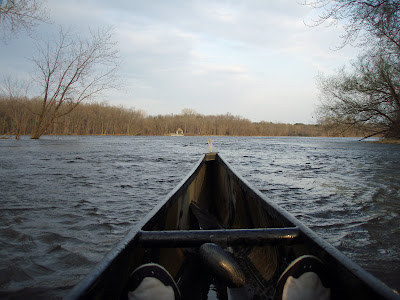 The Mississippi River keeps going up and up. I’ve seen it higher in the past, but this is the highest it’s been in at least three to four years as I recall.

I went out of Champlin tonight and the temperature was 65 degrees, but it felt cool because of the strong easterly winds. My canoe was being pushed around quite a bit tonight going both ways, upstream and downstream.

I didn’t want to venture to far from the shoreline going downstream so I had to be careful of the strong current and the effect of the strong winds to stay out of any sweepers.

I saw a couple boats tonight as soon as I got on the water. Then, later on I saw one of the immature eagles and two beavers.

Tonight’s paddle was two hours long and yesterday I spent a couple hours at the club lifting weights.

I plan to do the Snake River Canoe Race this Saturday in my J-193 C-1. It’s going to be interesting with all the recreational canoes in the swift water and standing waves. There shouldn’t be a problem with the rocks this year. My goal is to stay upright in the standing waves otherwise it’s going to be cold.

Snake River Water LevelAt River Mile 41.2 (Mora)The Snake River Canoe Club monitors the water level in Snake River during the two or three weeks preceding race day. Current readings will be posted here each day. Readings are taken at the DNR gauge at Mora. We believe the river is not canoeable if the level is less than 2.5 feet. We will switch the race to Knife Lake if the level is less than 2.75 feet. For comparison purposes, the level was 3.0 for the 2004 race and 4.3 for the 2006 event.Please bear in mind that, on this part of Snake River, water levels can fluctuate a great deal. An inch of rain will raise the level a foot or two within hours, and the level can drop again nearly as fast. Therefore, this gauge is the only reliable indicator for this part of the river. The USCS gauge located below the Cross Lake Dam is not a good indicator because there is a four day lag between Mora and Pine City. So check here often!

April 29, UPDATE:
We expect the water level to be near six feet for the 2008 Snake River Canoe Race on Saturday. This will result in excellent finishing times with little chance of hitting rocks. At this water level you will see fast current with standing waves about two feet high in some rapids. The water is still quite cold so it will be imperative that you wear your PFD and get out of the water as quickly as possible if you inadvertently go for a swim.

(I had to delete the table with the dates and water level since this program changed the format). You'll be able to check out the table by clicking on the above link, then click on Snake River Water Level.

Chuck
Posted by CIIcanoe at 9:04 PM

Cool pictures Chuck. Let's have coffee sometime after all these years as having you as a neighbor (across the street). You can also show me how to put on my new Yakima rack. Stay safe. --John

Thanks John! Coffee sounds good and I'll take a look at your Yakima racks.

I'll be around most of the week-end.