A little background information before I write about the incident on 04-26-22 that will go along with the video.

I’ve have been observing, photographing and taking video of Hoot, the female, and Give a Hoot, the male, Great Horned Owls for over 1 1/2 years. I’ve spent hundreds and hundreds of hours with these two special owls. I’ve gone through one complete nesting cycle last year/season watching Hoot and Give a Hoot raising their two owlets. This year/season  I’ve been observing them again raising another two owlets. When I go out to observe them its not uncommon for me to spend 2 to 4 hours at one time in all types of weather…snow, rain, freezing cold that’s well below zero degrees. I’ve gotten to know these two adult owls very well over time.

The area where I photograph is lightly used and I’ve come to know the few people by sight who use this area. Although, most of the time they aren’t even aware that I’m around. I’ve never seen another photographer in this area until early February of this year. Again, I’ve spent lots of time in this area over the past 1 1/2 years.

Up until February 2022 I used to write a detailed narrative to go along with my numerous photos and videos that I took that day with the owls. I really thought or at least hoped that other people would respect the owls and not try and locate them or the nest by any means possible.

I would post these written narratives on my Facebook (FB) page, my blog and another FB group, Owl about Minnesota., for others to simply enjoy and maybe learn a little more about the owls and their behaviors.

On Sunday, 02-06-22, I posted Hoot, the female, the first day she was using her new nest on the Owl about Minnesota FB group. The next day, 02-07-22, I was walking in the area when I came across a person I recognized.

I recognized his face and knew his name from another FB group that isn’t photography related, but I’ve never posted on it. He certainly knew a lot about me when we talked that day for never ever having met me.

When I saw him I immediately knew why he was in the area because he had his camera with him. I’ve never seen him before in this area walking around. Again, I just posted the nest photo with Hoot in it the night before. The first thing I said to him as we were approaching each other was what was he doing over here. He said he doesn’t come to this area often. During our talk I learned he was the one using the trail camera (s) in the area. I’ve seen some of the cameras around. This certainly gave my general location away where I was photographing.  I don’t know if he  checked the area after I was first spotted on the trail camera (s), but he didn’t have any recent Great Horned Owl photos until the next day after I posted photos of Hoot on the nest. He located the nest and took a picture of Hoot in it. If he didn’t know what the nest looked like I’m very, very confident he wouldn’t have seen her inside, because he needed to walk where others don’t walk. He had to know what the nest looked liked to find it.

The next day, 02-08-22, I went back out to the nest area to check on Hoot and it appeared this person had been back out there again earlier in the day. I checked and saw he had two more photos. One of Hoot in a different position on the nest and one of Give a Hoot. I know he has been out several more times to the nest.

I wrote another narrative about my contact with him from 02-07-22 and its posted elsewhere on-line. I certainly don’t have any respect for how he located this nest. Again, my initial question to him was what are you doing over here. He sure didn’t tell me he was looking for the owl nest. Just that he doesn’t come over here much only to find him in the exact area of the nest the day after I posted the nest photo on Owl about Minnesota.

Just before I posted this narrative It looks like he’s posted to the Minnesota Naturalist FB group. I saw one picture of one of the owlets on the nest. I didn’t bother to see how many other photos of Hoot’s family he’s posted.

On Tuesday, 04-26-22, I was out spending time photographing and taking video of Hoot and the owlets. About 1900 hrs I heard some people in the distance coming toward the nest. I turned on my camera that I have set up on a tripod pointed to the owlets on the nest to record video, so I could later see the owlets reactions from the noises.

I’ve done this before when Hoot was on the nest with the owlets to see their reactions when someone else came by the nest. Hoot became very nervous, but she stayed covering the owlets. That video is presently unreleased, but it will be made public later. Although, I haven’t been publicly posting the photos and videos with the owls I have many to be released when the time is right.

There were two people walking directly toward the nest, so I concealed myself the best that I could. I turned on the video on my iPhone and started recording them.

Although, there were two of people I later only spoke directly to one of them. When the male got closer to the nest the male made what sounded like a “kissing” sound directed toward the nest. I saw him raise his camera toward the nest as if he was taking a photo. They then continued to walk closer and closer to the nest. The male continued to do several other sounds and an owl call similar to a “modified” territorial hoot directed to the owlets in the nest.

The male walked right up to the nest and started knocking at the base of the tree/snag. I immediately told him that that wasn’t very ethical. I spoke up right away because I wanted him to stop knocking on the snag or anything else that he might consider doing next to get the owlets attention. It was obvious to me that he didn’t have the patience to stand back observe the nest to see if the owlets were in the nest or not. Maybe he was trying to get the owlets to move around in the nest to get a better photo. If you take his word that he was only trying to see if the owlets were in the nest to me that’s not the the way to check.  He certainly was going find out the quickest way by forcing the issue by knocking and making different sounds. I knew the owlets would be “concerned” by this behavior based upon my previous observations.

I reviewed the video clip from my camera that was focused on the owlets and both owlets moved when the male knocked at the base of the tree/snag. The owlets appeared “nervous” and started getting lower in the nest when the two people  were walking up to the nest.

The person told me his first name. Later when I got home after this incident I checked the Owl about Minnesota FB page and it didn’t even show anything when I searched for it on FB. I had been a member of this group for about the same amount of time I’ve been photographing Hoot and Give a Hoot. I don’t know when I was blocked from this FB group, since I pretty much stopped posting on in February after learning my information was being used to locate the nest.

Once I make the video, “Behavior at the Great Horned Owl Nest…Ethical or Not 04-26-22”, public it will be obvious why I checked the Owl about Minnesota” Facebook group.

This type of behavior is one reason why I’ve tried to keep this nest site secret. I very aware that the more people who know about where any owls/owl nests are located they tend tell their friends who tell their friends. The more people who know about the nest and come look for it will surely disturb the nesting site to some extent. That behavior might accidentally tip off someone else in the area about the owls who certainly don’t have a vested interest in the owls and their safety. For some people its all about the photo and to say I saw an owl in the wild no matter how it’s accomplished. 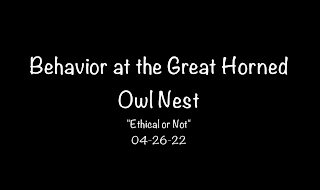