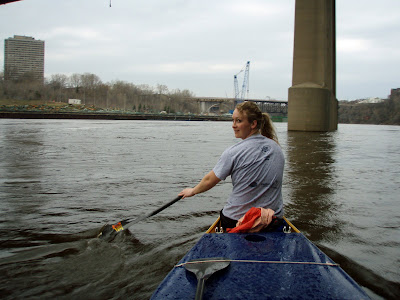 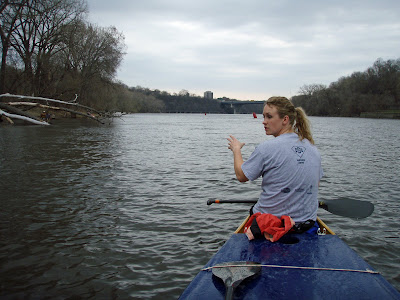 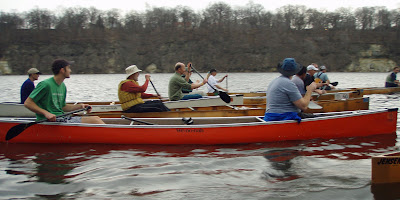 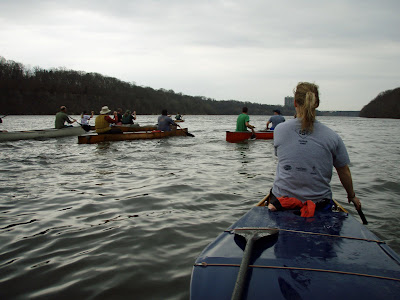 I went to my first “Monday Night Rookie Racers” practice since I stopped leading this practice in 2004. It’s been four years and this was only the second time that I’ve been in a racing C-2 canoe.

The only other time was when I was out in my C-1 and there were some other racers in their C-2’s. We were a ways up stream of the Anoka Champlin Bridge when we came across two guys who were paddling the length of the Mississippi River. We paddled along side of them until the bridge. I then jumped in Dave Dahl’s C-2 at the park just south of the bridge on the Anoka side and we then paddled down to the Coon Rapids Dam with the them. I never knew if these two guys made it or not.

I have come across several canoeists who were enroute to paddle the whole way down the Mississippi. Champlin is about 450 miles from the headwaters of the Mississippi. I also came across Martin Strel who swam the entire length in 2002. Here are a couple links about him and some photos.
http://www.martinstrel.com/main.php
http://www.caleuche.com/River/EyeToEye.htm

Back to canoeing… when I left Brooklyn Park area tonight it was raining , but it didn’t look like it would be and all nighter. The temperature was 74 degrees so even if it did rain it wouldn’t be bad. If it was colder I would just adjust what I needed to wear.

It took me about a half hour drive from work to get to the East Bank River Flats where we start. I saw several people that I knew and said hi to a few while I prepared my canoe. I even put on my new license on it.

Joe Conrad was taking attendance just like I did before. I gave out certificates at the end of the year to the paddlers that documented the number of times they had been at the practices.

I ended up with Emily Peterson as my partner and she paddled in the bow. She’s not a rookie, but that was ok with me and it was a pleasure to paddle with her. Emily was starting to race about the time I stopped so I’ve never have paddled with her. Thank you, Emily for tonight’s paddle.

Emily and I got on the water at 1757 hrs and we paddled up stream toward the new 35W bridge that is being replace from last years collapse. We turned around and paddled back to where we put in and waited with the group for a couple more paddlers to get on the water. The paddlers were bunched up early on but as we took off the canoes spread out on the river.

The rowers also use this section of the river. They sometimes they complain about us and we sometime complain about them. Tonight, the lady driving the boat who was watching and coaching the rowers didn’t have any concern for the wake she put off near me and Emily as she went by us.

The wind was in our face as we went downstream. The river was choppy from the wind and from the wakes of the ten C-2 canoes. Emily made the comment at least the wind will be at out backs on the way back up. Emily and I did take on a little water from the waves but we just opened up both bailers. No big deal.

It was cloudy and it began to rain on the way back up stream. Several of us put on rain jackets while it came down. It stopped shortly afterwards and I took my jacket back off.

There were several sections coming back up stream that the wind was in our face. That wasn’t supposed to happen, because it was in our face going downstream.

Emily and I got back to the put-in one hour and fifty-five minutes after we started. It was nice to be back in a C-2 especially with a competent paddler such as Emily.

We carried the canoe up to my Suburban where we took our gear out of it, put the canoe cover on and place it on my vehicle. Emily made sure the wind didn’t send my canoe flying while I got the straps out and secures it to the roof rack.

When I drove home the sky let loose with heavy rain and some thunder and lightening. We just got off the river with a few minutes to spare.

I have next Monday off from work so I plan to go again next week.
Chuck