Here are some pictures from some of my bike rides that I did on my own and as a ride leader with the Twin Cities Bicycling Club out of the Twin Cities.

On February 4, 2018 I broke out the googles for the first time this season...


February 5th was a warmer ride than yesterday, but still in the lower single digits..


On Friday, 02-09-18 I rode up to the confluence of the Crow River and the Mississippi River in Dayton, MN. I wanted to check on some road conditions for my TCBC ride on Sunday.

On Sunday, 02-11-18, I led my 54 mile TCBC Balaclava Sunday bike ride out of Champlin, MN. Catherine and Paul showed up with their balaclava's since the temperature was 1 degree F when we started the ride.  For the day we averaged 12 degrees. We rode into the wind for the most part for the first 30 miles, then it was the wind to our backs on the way back. Our break was at the Dunn Brothers in St. Micheal that was at about mile 33.


Wednesday, 02-14-18, I led my 57 mile "Another Mild Weather Wednesday" ride from Champlin, MN. Catherine and Paul showed up again to ride.This was the second warmest day of the winter season. We started the ride at 14 degree F, but by the time we finished it was around 40 degrees. This ride took us on new dirt roads in the sand plains area of Anoka Co. We stopped for break at Dunn Brothers in Elk River.

On Friday, 02-16-18, I rode, but I didn't take any pictures. Nine miles into my ride I had a slow leak. I looked at the tread of my studded tire and couldn't see anything obvious, so I pumped the tire up to about 50 pounds. I rode another 5 miles before the tire became too soft to ride anymore. I had to change the tube on my rear tire, and put in a tire boot so I could get home. What I found out when I took off the rear tire was that one of my studs had punctured my tube.

Saturday, 02-17-18... I led my 72 mile TCBC  Westward Saturday ride. Guess who showed...yes, Catherine and Paul. Rick even showed up. Rick said he wouldn't do the entire route. Rick peeled off at mile 20 and finished the day with 38 miles. Catherine, Paul and I did the entire route. This was another new route with some new dirt roads. It was a balmy 29 degrees average for the ride. Although there was a strong NW wind we didn't feel it much except for in a few places. What was really nice was having the strong wind to our backs for the last 20 miles. Those studs on the tires were just humming.

Posted by CIIcanoe at 6:14 PM No comments: 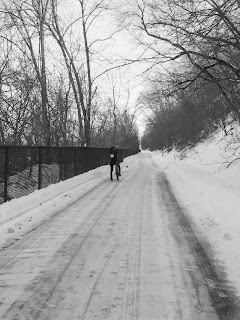