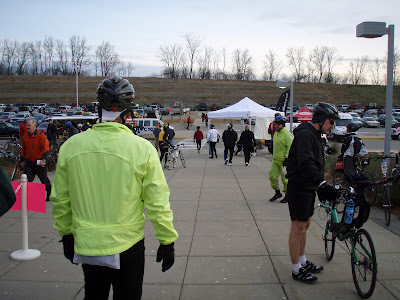 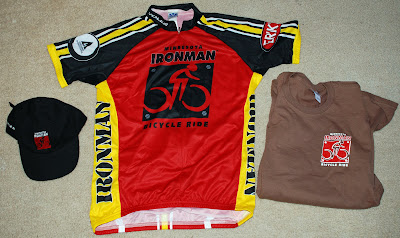 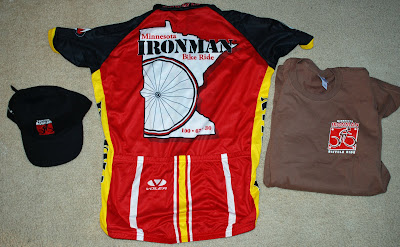 This morning was a much better morning than yesterday, weather wise. There was no snow and there was no gale force winds blowing. Just a light breeze out of the NW. The temperature when I got on the road to drive to the ride was 30 degrees.

The last time I did the Ironman ride was about 1990 when it was in Buffalo, Minnesota, but today I would be driving to Lakeville, Minnesota..

I left my home at 0600 hours for the 40 to 45 mile drive, but with very little traffic on the roads the time went by quickly. When I got to the Lakeville High School it was a hub of activity. I parked in the High School lot, but there were cars parked all along the road leading to the school. There were many cyclist already leaving the lot and other on the route.

I went inside to check in and get my yellow paper bracelet. I had ordered a t-shirt and cap, but they told me I had to pick those up after the ride.

This is a ride and the earliest you can begin the ride is 0630 and then there is a cut off time that you need to start but I don’t know what it is as I planned to be biking by 0730 hours. There were cyclists leaving the lot as more cars poured in to prepare for their ride.

I hit the timer on my cycle computer and I was officially on my way at 0724 hours with only 100 miles before I was finished. The ride began from the high school and we were headed to the west toward Jordan. I didn’t have my balaclava on when I left the parking lot but I did stop after the junction where the 100 and 62 mile route splits. Now that felt much better!

A group of “real” cyclist came past me. I’m a canoeist looking like a cyclist today. They were a little unorganized in their pace line as they were passing me. In fact, one of the cyclists mentioned this to me as he rode next to me. When they all passed I grabbed the rear wheel to the last cyclist for a little drafting. The pace line was not smooth and after the second slow down and speed up I heard the sound of a crash up ahead. I could see at least two cyclists go down after the 5 to 6 cyclist in front of me started swerving in different directions. Another cyclist couldn’t avoid the first two that were already down and he went down. I headed off to the right onto the dirt shoulder and safely got around.

The first rest stop was at the Jordan High School after 23 miles. I admit it was nice to stop. Going to the west we all had the cool wind from the NW in our face. I had some food including one of about eight or nine muffins that I would have throughout this ride. They were small ones! I didn’t stay but only about 10 minutes before it was off to the next rest stop in Belle Plaine only nine miles away.

Shortly after I left Jordan High School a tandem cycle came up along side of me. The guy made a comment about my custom Terry Osell bike. This would be the first of four people who would comment on the bike today. I couldn’t remember if it was 1989 or 1990 when Terry built this bicycle for me. I just checked my records and I picked up the bike from Terry on 04-23-90.

We introduced ourselves and the guys name was Tony and I’m sorry I can’t remember his wife name, but they live in Elk River. We talked about the BWCA and they just recently started to go. In fact, their first trip was last year and they have a trip planned for this year.

Well, the tandem kicks butt going down hill but I would catch them on the incline. We rode together until the next rest stop in Belle Plaine.

I did pretty much the same thing at this rest stop. (32 Mile) I had another blueberry muffin, also.

The next rest stop was 22 miles away. It was an uneventful ride to the stop, but it was nice to get off the bike again. I use to work in the Hennepin County Jail in the late 1980’s. Another deputy and I were assaulted by an inmate who wasn’t on his psych meds. The inmate picked me up and used me as a battering ram, ramming my head against the brick wall several times. Besides the stitches in my head I’ve had problems with my neck since then and it gets very sore riding longer than a couple hours at a time. So it’s nice to get off the bike to stretch the neck muscles.

After this rest stop at Montgomery Middle School it was on to the next rest stop at Lonsdale Legion Halland we now all had a slight tail wind.

Eventually, I made it to the final rest stop at Greenville Park Elementary. Besides having another muffin I also had a bowl of hot pasta. Oh, boy, did that taste good.

I then heard one of the volunteers say that a sleet storm was approaching. Sure enough the sky was very dark to the west. Well, time to get moving. We would all be heading to the north and heading back into a head wind.

The wind began to get stronger and it began to sleet/rain when I was about 45 minutes from the finish. It started off slowly then gradually it built up. It seemed like I kept saying to myself that I only had about a half hour left. I kept on pedaling but I kept getting slower and slower because the wind kept getting stronger. No matter how much peddling I did it seemed like I always had a half hour to go. Eventually I was able to get through the half hour mark and I was pulling into the lot of the school at my Suburban at 1534 hours.

I was on the road for a total of eight hours and 10 minutes with all my stops at the five rest areas, but actual biking time was seven hours, 7 minutes and fifty-two seconds.

I put my bike in my Suburban and went in the building to get my t-shirt and cap. On the way out I bought a cycle jersey commemorating this ride.

If you ever get a chance to ride this ride it’s very well organized and it’s fun. There are three different distances to choose from, 30, 62 and 100 miles. Although the ride was probably in the 30’s for most of it, it’s not bad if you’re dressed for it.

Tomorrow, I plan on going to the second Monday Night Rookie Racers of the year on the Mississippi River. Now I need some of those cyclists who kicked my butt today to show up so I can kick some butt on the water.