I've been on three more walks at night, since I last posted some night shots to my blog. On 12-24-12 I went out on a very, very cold evening to St. Paul and got a few shots. I would have liked to stayed out longer and just walked around downtown St. Paul to see what I could get, but it just wasn't the evening for it. I think I came out with some good shots. The first three shots on this blog post are from 12-24-12...there are more posted on my website. 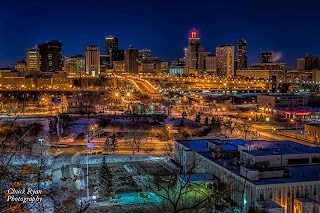 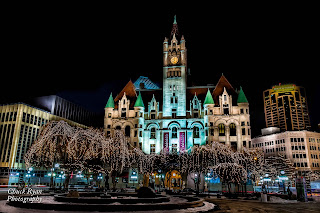 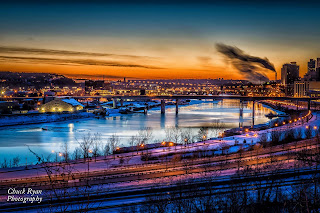 The next three images are from 01-04-13. More images posted on my website....One place I stopped was at the Capitol building in St. Paul, MN. I was going to get some more shots of the Capitol, but there was some outside construction with some enclosed scaffolding that just wouldn't enhance the image. I got some nice shots of the Peace Officers Memorial...one image is one posted in B & W here. I also have the same image in color as well as other shots of the memorial on my website. 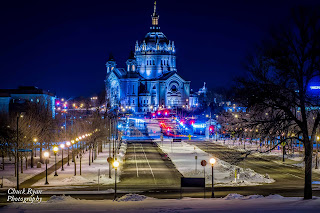 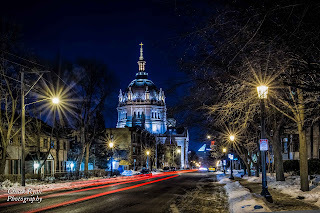 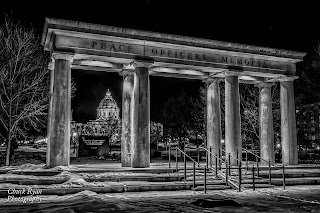 On Friday, 01-18-13 I was back in Minneapolis trying to locate some different views of the Minneapolis skyline. I located one area to the west of the city and another to the east. I got permission to shoot from the location to the east of the city. This person also told me about another area and gave me permission to shoot from there also...although this other area was right in the middle of the city so I couldn't get an overall skyline view of the city. Another area I checked out was along the Mississippi River, but I wasn't able to get a shot. I followed a small opening/trail through some brush that ended. From where I was standing in the brush it looked like it was a steep drop to the river so I left without exploring any further. I'll have to go back in the day time when it will be safer to check it out. My intentions for the shot I wanted was to be up high...so I really don't want to go down any further. 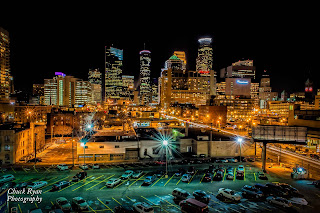 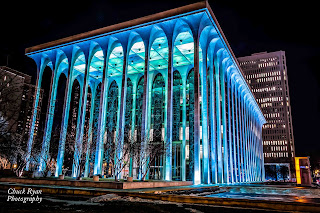 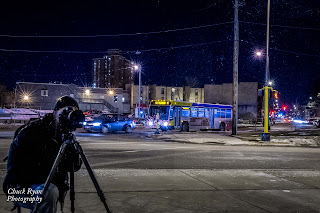 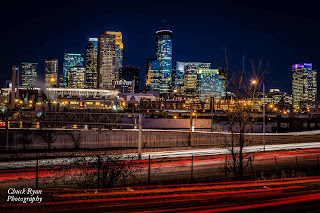 My friend, Elizabeth Tolzmann, from work has a son who is a professional boxer, Ismail Muwendo. 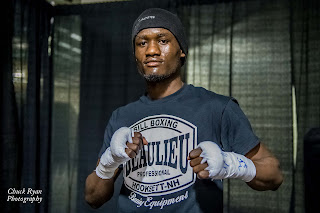 A couple months ago I posted a message on Facebook that I was looking for a female model for a photo shoot at my studio. Elizabeth Tolzmann messaged me and asked me if I would ever be interested in photographing a professional boxer sometime. She mentioned if  I still needed a female model that one of the ring girls with Sterling Entertainment Group might be interested. Last, she made the comment that I should shoot a professional boxing event sometime. 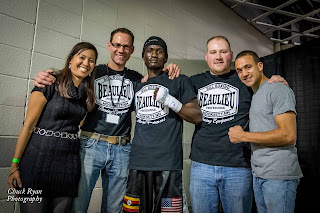 I responded that I would photograph her son sometime in the studio. I would check out the Sterling Entertainment Group “SEG” for a model. Although, I never contacted “SEG” to see if any model would have been interested in a photo shoot. I wrote that I would be interested in shooting a boxing event. Although, I told her that the boxing organization might have a problem with me just showing up to photograph the event....this based upon some music events that are very controlling about photographers. This past summer at the Rivers Edge Music Festival in St. Paul I carried my camera equipment through the front gate after going through several security check points. After about an hour and half I was approached by security and was asked how I got in. I replied, I gave them my ticket at the front gate and walked in while pointing in the direction of the front gate area. If you’ve seen me at the different live events you know there’s no way for me to sneak my camera gear inside.  I was told by security, and he was nice about it, that I would need to give them my camera equipment for safe keeping (that wasn’t going to happen) if I wanted to stay or I would have to leave. I was actually followed to the front gate and watched as I left out the gate.

A couple months past and on Thursday, 01-03-13 I received another  message from Elizabeth asking if I wanted to photograph the upcoming professional boxing event at the Hyatt Regency in downtown Minneapolis, Saturday, 01-05-13. I replied that I certainly would! I asked her to send me more information on the event.

The boxing event was put on by the Sterling Entertainment Group in association with Fight Area 51. The name of the event was Pound4Pound2 . Ismail would being fighting in the featured bout for the ABO Mid American featherweight title. Ismail was 11-0 going into the fight. He won his fight with a unanimous decision keeping the title and going to 12-0.

Elizabeth set it all up and all I had to do was show up and shoot.

This would be my first time photographing a live sporting event...boxing...and indoors at that! I knew there were going to be some challenges as with any low light event.

I photograph a lot of different low light events including music, but nothing where I needed to have my shutter speed of at least 1/1000. When I photograph model runway events I’m up around 1/400. I had no idea what the lighting was going to be like or exactly how it would be set-up, but I have shot at ISO 6400 and 8000 before...briefly. The reason for a shutter speed of 1/1000 so I could stop the motion/action.

I arrived at the Hyatt Regency in Minneapolis early, since I had no idea what the set-up would be so this would give me time to do some scouting. Usually I’m always early for most events to check things out. Once I got my pass at the front door I walked into the big room where the ring was set-up. It was still early and not a lot of people around yet. I noticed there were chairs set up around most of the ring with a couple small areas with no chairs. I walked to one of the open spots which looked like as good as any to photograph from. Then I sat down nearby and put my lenses on my cameras. Took a custom white balance with each camera. I shoot manual mode so I knew I wanted a shutter speed of 1/1000. Now what ISO did I need....I believe I set it first at 6400...nope, that isn’t going to work. Next, I put it on 8000...I thought I could get away with that. Only a few times have I shot with that high of an ISO.

I noticed another guy diagonally across from me. When he pulled out his camera I went over and introduced myself and asked him a few questions. His name was Jesse Kelly who has the website, Minnesotaboxing.com. I mentioned what my settings were with this lighting. Jesse  said he wasn’t going to be shooting that high of shutter speed or ISO.

When we were done talking I went back to my spot. I took a few more test shots. I wasn’t feeling good with the ISO of 8000 because my shots were a little dark. I bumped my ISO to 10,000. I’ve never shot an event with that high of an ISO before...yes, the images were grainy.  Since this was my first event I was going to stick with a shutter speed of 1/1000...so ISO 10,000 was going to be so I could see how the D4 does in this type of situation. I was going to live with the my shots stopping motion and some grain. I really wouldn’t know if I made the right decision until I looked at the images on the computer.

There were going to be eight different fights so I would be getting some on the job training before Ismail’s bout...the featured fight. After shooting this event and if I shoot another boxing event I will leave my 70-200 lens at home if unless I know the lighting will be brighter. Probably replace it with the 50mm 1.4 to see what kind of shots I can get with it. I took some shots with the longer lens when the fighter was walking up to the ring front the back of the room, but usually there were too many people in front of the boxer to get a shot. If I waited they walked right up to me so I used my D4 with the shorter lens. When I took shots of the ring girls or when the fighters weren’t fighting I dropped my shutter speed to around 1/400.

Here were my camera settings:

I’ve finished my images for the Ismail Muwendo vs Anthony Napunyi bout and they are posted on my website...HERE.

It was busy at work this past week and I worked late most evenings so I haven’t have time to go through most of my images from the rest of the event. I was planning to post this earlier, but just didn’t have the time. 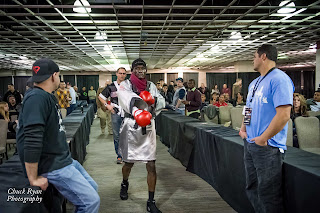 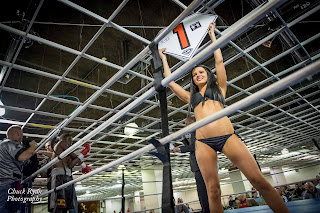 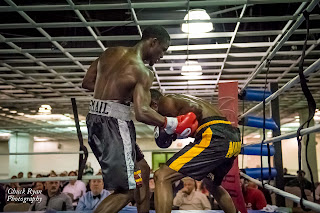 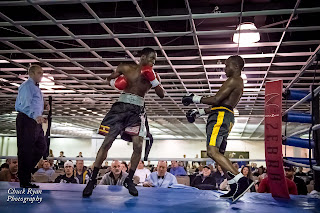 Chuck Ryan Photography (Model Mayhem
Posted by CIIcanoe at 10:44 AM No comments: