On Monday, 01-21-19, I went out for s short 17 mile ride around the Elm Creek Park area. I waited around until there was a light snow falling before I started my ride. The only thing was it lasted only about an hour, but it still was a good day on the bike.

On Tuesday, 01-22-19, Chuck showed up to do my TCBC Fat or Not bike ride out of Champlin. I made the decision to ride the fat bikes shortly before the ride started. We ended up riding for 30 miles. The trails were still very icy underneath the 1 inch snow fall from over night.

On Tuesday, 01-15-19, Chuck showed up for my 59 mile Mild Weather Wednesday ride. We headed SW of Champlin to Maple Plain where we took a break at Blackwater Coffee.

On 01-17-19 Chuck and I rode 52 miles on my Going Somewhere bike ride. This time we took a break at the Dunn Brothers in St. Michael. We took the opportunity to ride some gravel roads before the break, since I hadn't been on them since the snow, rain, more snow, very cold weather, several more days of very warm weather before getting cold again.  There were some sections of ice but rideable.


While on today's bike ride I got a flat front tire at about mile 10. Luckily, I was close to a house that I saw had the garage door open. Although, the homeowner allowed me to use his garage he was pretty reluctant and said was going to leave soon. So I changed the tube as quickly as I could. It was nice to be out of the wind while changing the flat...

I’ve had 4 flats with my studded tires in the past two seasons. All on the rear tire. The studs have pushed through the inside of the tire causing very small pin sized holes in the tubes. So after the last flat I put some tire liners in each tire to hopefully prevent the studs from pushing through the tire and puncturing the tubes.


When I was changing the front tire I looked at the front tube I noticed some longitudinal cuts that were different from the previous holes made by the base of the studs. I checked the inside of the tire and couldn’t find anywhere the studs had poked through the tire. I put a new tube in and we were back on the road for another 42 miles without any more problems.

The next morning, 01-18-19, I checked my bike and notice that the rear tire was flat. I took off the rear tire and notice at least seven cracks in the tire liner. I also saw at least seven cuts in the tube. I located the cut that was letting out air and matched it up to the crack in the liner. Then I checked the area of the tire where the stud was located and it hadn't pushed through the inside.

What appears to be happening is the very cold weather is making the tire liner more brittle than the rubber compounds of the tubes. So when the area underneath the studs strike the tire liner over and over it’s causing the liner to crack which ends up cutting the tubes.

UPDATE: 01-20-19. Since I wrote this I read a review on the RhinoDillos from someone else who had a similar issue, so now I'm not too sure about my theory on what is exactly causing the cracks.

Here was his comment, "I do not like these liners because they have destroyed two of my tubes. After ~800mi of use, the blue plastic-like part of the liner cracked and formed a hard sharp plastic edge which sliced into my tube. My tube then rapidly deflated, while I was riding. Not a good situation...". He also had some images of the cracks in the tire liner similar to mine.

I’ve never had a problem with getting a flat caused by a stud in front so I removed the tire liner.

Today, 01-18-19,  I cut the bead off an old Challenge Strata Bianca tire and put it in the rear tire today.


On Saturday, 01-19-19, Paul and I rode this very chilly morning. It was -9 F when we started the ride. We rode a loop up to Elk River and back from Champlin. The route was 42 miles long.  The average temperature was 1 degree F, even after bringing my Garmin inside Dunn Brothers to charge while we took a break.

This year I bought some Dermatone to use for my face on those cold mornings. I've used the Dermatone in the lower left, but haven't used the other stuff with Zinc Oxide. 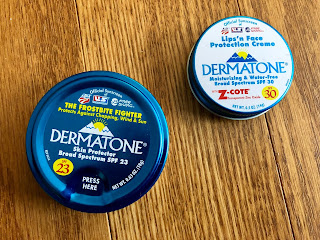 Posted by CIIcanoe at 4:49 PM No comments:


Here are some pictures from a couple TCBC (Twin Cities Bicycling Club) group rides on January 10 and 12, 2019.

On, Thursday, 01-10-19, Chuck showed up to my Coffee Thursday bike ride from Champlin, MN. This was a 47 mile bike ride mostly in Anoka County.

There was about 3 to 4 days of very warm weather before this ride where lots of snow melted causing more ice to form on the roads and trails when the temperature dropped again.

There were several section of fairly smooth ice and many areas that was rough and rutted from the snow, rain, snow, then melting from the winter storm over the holiday's.

I changed up my planned route after all the ice I encountered last Thursday.  We took our break in Oak Grove at the Bridge Street Coffee Box. Its one of my favorite spots to stop when I ride to the north of Champlin. Great coffee and I usually get a bagel/breakfast sandwich which also taste great!

While we rode it looks like everyone has an ice skating rink in their yard or fields this year. :)

Chuck Ryan
Posted by CIIcanoe at 9:12 AM No comments: