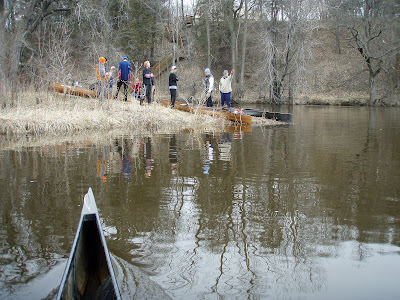 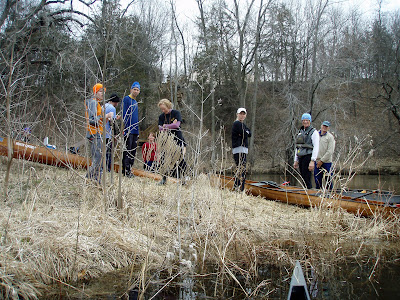 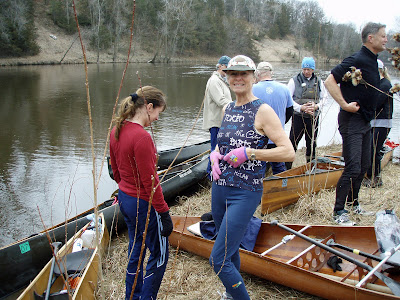 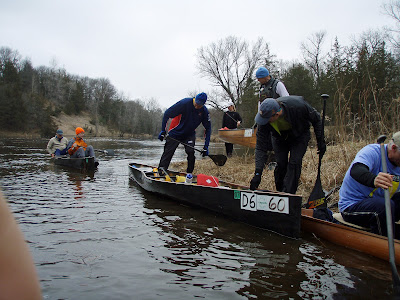 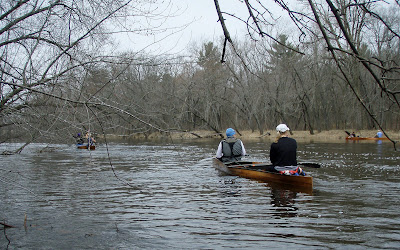 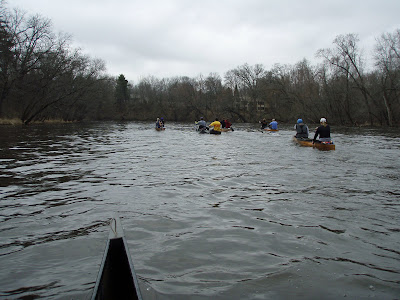 I’m sitting here at my computer thinking how fast this week-end went by. Yesterday, Saturday, I went to the Rum River to paddle. I didn’t see any of the other racers at the parking lot nor did I see them all day. I had the river to myself.

When I started at 0919 hrs there was a cool northerly wind following the river channel as I went up stream. The temperature was 44 degrees, but I had to put my knit cap on my head the cover my ears to keep them warm. I went back up to the 7th Av Bridge just like Friday.

I really got into a groove coming downstream and it felt good. I reached the landing at 1315 hrs making today’s paddle three hours and 55 minutes. The temperature only moved up four degrees.

I had to go shopping after paddling. I picked up some West System Epoxy from West Marine. Then I went I bought a couple items for biking. I went to Erik’s Bike Shop in St. Louis Park and to their Maple Grove Store.

Next Sunday I have the Ironman Bike Ride. It was probably 1989 or 1990 when I did this ride the last time. I used to ride with a group which at that time was called the American Youth Hostel that is now know known as the Twin Cities Bicycling Club. I quit and I haven’t been a ride since they demanded that everyone wear a bicycle helmet. So guess what…I had to go buy a helmet! I was going to get the Giro Ionos but they didn’t have the color I wanted so I got a Specialized S-Works. I picked up a pair of Pearl Izumi P.R.O. Cycling gloves as well as a Pearl Izumi Zephrr jacket. I think I’m all set for clothes, but will the body make it 100 miles.

I haven’t come close to putting in those kinds of miles this year, but I can suffer with the best of them

Afterwards, I went to the gym and lifted weights for a couple hours.

Today, Sunday, I wanted to get on the water a little earlier than I had been getting on there lately. I checked the forecast the night before and although it said the temperatures were to get around 70 degrees it showed the wind speed approaching 20 mph around noon. It never happed.

I went back to the Rum River out of Anoka. I was on the water one minute before 8 am and the temperature was 41 degrees. I didn’t need a hat with the light wind. I really enjoy paddling the early season because there are no boats or at most very few.

It was back up to the 7th Av Bridge. I had noticed just in one day the river had come up a few inches and the current was a little bit stronger. Again, I was feeling good and getting stronger. The sounds surrounding the river seemed quieter being it was a little earlier in the morning and the wind wasn’t blowing in my ears.

I was coming back downstream when I came upon some of the racers who were stopped for a break at the island. I saw them after doing 3 hours of paddling. They told me they just got there. I stopped for 4 minutes to say, hello. I turned around and went back upstream with them until they turned around and then we all headed back for the landing Today’s paddle was 4 hours and 29 minutes. The day started off cloudy and cool and by the time I got back I was just in a t-shirt, it was 58 degrees and the sun was out.

I did some active rest…grocery shopping before I did 40.3 miles on my road bike. I haven’t figure out my time but it was probably close to 2 hours and 40 minutes. I did a new route (or most of it). It was a beautiful day and sunny.

Tomorrow (and the rest of this week) I have some training in another city but if I get back to my office on time I am going to go to “Monday Night Rookies” on the East Bank of the U of M campus along the Mississippi River. This will be the first one of the year and it will be the first one I attended since I stopped leading this get together. I posted earlier what this was all about. If I make it tomorrow I will write a little something about it.

very nice pictures...
beautiful blog! Congrats! You are an artist!!!