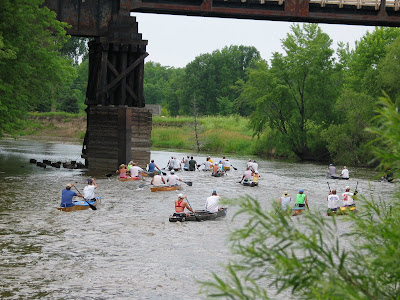 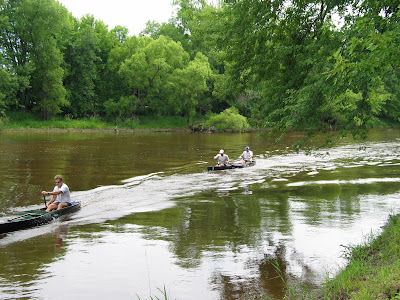 Earlier, on 04-10-08, I posted a photo of the top four canoes in the 2003 Palisade to Aitkin Canoe Race which was a 31 mile race on the Mississippi River. It was the photo I posted under the post, Marathon Canoe Racing Information. Here it is… 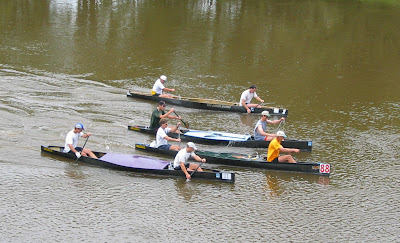 When I was the racing director for the Minnesota Canoe Association (MCA)
I would write a short narrative about the different races and I would have it published in the HUT! Magazine. This was the name of the magazine put out by the MCA before they changed the name to the Minnesota Paddler.

We had a good showing this past week-end at both races. The first race was in Duluth called the Deux Pipe Canoe and Kayak Marathon Race. The race is on the St. Louis River and it took about an hour and a half to finish it. I haven’t received those race results from Ron Deter as of yet. Once I get them I will post them. The top three C2 canoes were Kjell Peterson and Todd Ellison; Steve Peterson and Scott Ankeny; and Joe Manns and Chuck Ryan.

After the Duluth race several of us went over to Kjell and Anna Peterson’s for a little together for food and conversation.

Toward early evening people went off in different directions to spend the night before re-grouping for Sunday’s race in Palisade. The Palisade to Aitkin Race is a 31 mile race on the Mississippi River that would start at 08:30 AM.

I went to the campground in Palisade where I saw Fred Rayman sitting on a picnic table reading a book. He had been there about an hour before I got there. We went to the river that runs next to the campground to check the water level and it appeared to be about the same or slightly higher than last year. It was good news because there was very little water in that section of the Mississippi River just a couple weeks earlier. It would have been a long hard race if the water was low. Dave Lawler and Bill Briggs from Canada were next to arrive then the Arenz brothers, Devin and Brett.

Dave and Bill drove through Grand Rapids and said there were tornado warnings out and that the storm was moving in a SE direction. Well now, we are directly in that path. We were watching the sky and we could see a bank of clouds that could be described as odd coming our way. This cloud cover went over us still moving in the SE direction causing us some concern and the wind picked up a little but no rain. The cloud cover went over us and it now appeared to be breaking up above us. Now there was lightening in the direction of Duluth. The next morning Joe Manns who was staying near Duluth said they received some heavy rain during the night.

Those of you who camped out at the campground last year sure remember the many mosquitoes that were out of control, but this year they were some what under control till dark. We all stayed out of our tents for awhile after dark but we were all on the move swatting the little pest.

The next morning cars began showing up at 7am for the registration. There were 18 canoes in the Pro class and one recreational team had started earlier for what would be their 6 hour and 2 minute paddle down the Mississippi River.

There were going to be several fast teams that were going to be on the water. My partner was Al Rudquist. I’ve only been in a canoe once previously with Al for about 10 minutes in the Rapids Round Robin over the 4th of July week-end. He had no idea if we would be able to out sprint some of the teams if we waited to the last minute to sprint to the finish. We both have many hours of training this year so we decided to start the grind about 45 minutes from the finish. Sounded easy enough to me…right!

The race actually got started at 8:45 AM. There weren’t any real hard sprints for any long duration at the start. There were about 9 or 10 teams that eventually got up next to one another and we were riding as one big group down the river. One by one some of the canoes began to drop back as the sprints continued around the shallow corners of the river.

After a couple hours the following teams were still as a group Jason Larson and Kjell Peterson, Joe Manns and Brett Arenz, Al Rudquist and I. Todd Ellison and Dan Hassel were back a little ways but they would move up when we eased the pace slightly.

We had made the left turn in the river at the junction where the diversion channel goes straight with the three teams still together. I remember Joe and Brett starting another sprint and we all responded. We were still in a pack as the sprint slowed. Dan and Todd tried squeezing into the group but we weren’t going to have none of that and Al started the sprint. We dropped Dan and Todd immediately. This would also be the last I would see of Brett and Joe. They may have hung on a bit but I was now focused on the hard paddle.

Al had started the grind that we talked about earlier before the race. We were paddling hard as Jason and Kjell continued to ride our side wake. I heard Jason tell Kjell that Al and I were only trying to wear them down. I heard Kjell’s reply and I can’t remember his exact words but he re-phrased what he had just said to something else to make it sound as he wasn’t paddling hard. This hard paddling went on for about 30 minutes. Al and I made a right turn around one of the bends in the river and dropped Kjell and Jason back a couple waves. Al then told me we had to go faster. Well, we had to step it up another notch. All I can say is that I’m glad that I’ve been doing all the training that I have this year. I still wondered how long it would be till the finish because I knew there wasn’t going to be any let down until we crossed the finish.

We did pull a little further away but I really could tell by how much. There was one point where I leaned the canoe the wrong way causing us to lose some ground to Kjell and Jason. I saw Jason and Kjell trying to move up over to our left. Actually I could hear Kjell breathing harder that I’ve ever heard him. I can only assume Jason was breathing heavily but I couldn’t hear him. Jason and Kjell were still behind and to my left a few minutes from the finish when I heard some words between Jason and Kjell. I figured at that point they must have each planned on doing something but it was in conflict with each other. Al and I crossed the finished line in 3:47:7, Jason and Kjell were 3 seconds back. The last 40 to 45 minutes was a very intense paddle to a very good race.

There were cash prizes given to all 18 teams that finished the Pro class. T-shirts were given to the two in the recreational class.

The Minnesota Canoe Association and We-no-nah Canoes provided the money for the cash prizes.

Black Bart Paddles provided a paddle for the random drawing.

Pearson Candies provided the bite size Salted Nut Rolls for all of us to enjoy. I have to mention that Anne Manns won the 25 pound Salted Nut Roll that was given away in the random drawing.

The Aitkin Chamber of Commerce provided free Sub sandwiches and drinks for the paddlers.

Thank you to Carroll Kukowski of the Aitkin Chamber of Commerce for her support.

Thank You to Ann Manns for timing the racers and dividing up the money for the cash prizes.

Thank you to Anna Peterson for taking pictures for me.

Thank you to anyone I may have forgotten.


Here were the results that day…