For the last three years I had been leading a double century bike ride that started in Coon Rapids that went up around Lake Mille Lac and back. After last year I made up my mind that I wasn't going to ride up there this year. The only scenic part of that ride was the 60 miles around the lake, but the other 140 miles was really quite boring.

When I got back last year I marked out a rough route going out west from Champlin and back to see how far west I could get doing about 200 miles. I let it sit for about a year until someone on one of my recent rides asked if I was going to lead the Summer Solstice Double Century this year. I said I wasn't, but I had another ride almost finished that I could do.

In about two weeks I had the ride that I called, Going Somewhere Different Double Century, scheduled on the ride calendar. I initially was going to post it for Saturday, 06-30-18, but the day had several hours of rain in the forecast. When I posted the ride for Sunday, 07-01-18, it looked like a decent day. How quickly the weather forecast changes. Based upon the weather still looking like I should do something other than riding 200 miles in the rain on Sunday I rescheduled the ride until Monday, 07-02-18 at 0530 am. This meant the person who asked me if I was going to lead my double century couldn't ride because he had to work.

On Monday, 07-02-18, Catherine, Paul and I rode the double century that ended up being 211 miles. The route basically went west from Champlin to Willmar. It then turned north from there to Spicer, then back east to Champlin.

It was a beautiful day for a bike ride.


Here are a few pictures and videos from the day... 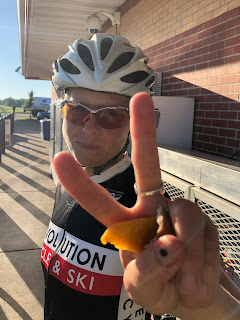 Thanks to Catherine and Paul in joining me on the adventure!!
Posted by CIIcanoe at 3:25 PM No comments: