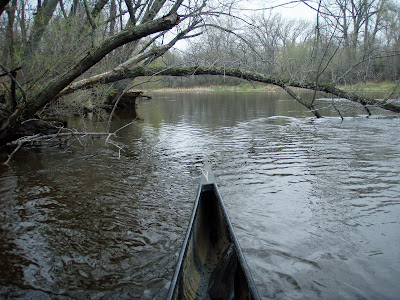 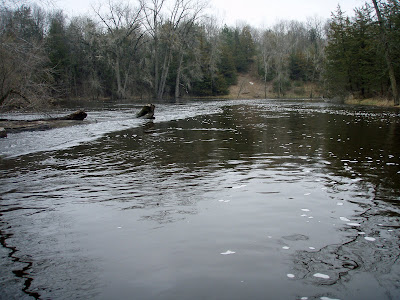 It must be the week-end….The forecast is for rain, snow and cooler temperatures. We did have a couple of nice days this week, at least clear, sunny skies.

Last night before I went to sleep I moved my alarm clock back another hour to get up a little earlier than I had originally planned. I was thinking of doing an organized bike ride this morning, since I had no plans to paddle because the Snake River Canoe Race is this Saturday.

I got up and decided I haven’t been getting enough time on the water so a change in plans was in order. My plans now were to paddle and then do a short bike ride afterwards.

I drove to the Rum River in Anoka . The temperature outside was 46 degrees and cloudy.

I started my paddle and it was cool, cloudy, damp and windy, but other than that it was a nice day for a paddle. Actually after five minutes I was very comfortable, but I kept my PFD on since it was so windy.

The water level was up but not as high as it was in 2000. I remember that year we were paddling in the corn fields near the 7th Av Bridge. If I recall that was also the year that Todd Ellison lost his woodstrip C-1 for a week or so. Todd got tangled up in the branches along shore and swamped his canoe. The current had his canoe wedged up against a sweeper underwater that it was impossible to free it. Todd had to get a ride in another C-2 for the ride back to the landing. Todd was able to free his canoe later after the water had receded with only some minor damage.

Today I only wanted to do an easy paddle but still it was some work with the strong current. It took me one and forty-one minutes to make it up to the island where we normally turn around for a short day. The return paddle seemed very quick, but the strong, gusty wind caught my canoe a couple times causing my heart rate to jump after it slid my canoe sideways about one foot. I’ve had the wind catch my canoe a few times in the past. The wind has turned my canoe perpendicular to the shore without any say on my part. Then after sliding sideways without any control and as soon as the wing of the canoe goes under, then usually I’m next to go in the water. The water here in Minnesota is still mighty chilly or should I say down right cold; so I’m trying to prevent any early swims. Oh, that reminds me…tomorrow there will be some standing waves in the Snake River Canoe Race. Again, my goal is to stay upright and not get hit by any recreational canoeist.

I saw three deer where I saw five the other day. They watched me as I paddled by and said, hi. The paddle downstream only lasted forty-two minutes for a total time today of two hours and twenty-three minutes.

After I came home I had something to eat and then I got ready for my bike ride. I figured I would do a loop through the Elm Creek Park that I’ve done many times. This loop usually will take me about and hour and a half. It’s all on the paved trail system. I figured I would be the only one on it now because it started to sprinkle.

I’m all dressed ready to go so there wasn’t any stopping now. When I started the bike ride it was cool, cloudy, rainy and windy and not such a nice day to be on a bike; but I wasn’t going to change my mind. The rain came down a little harder after 5 minutes but I still wasn’t going to turn around and quit. Heck, the whole ride wasn’t going to be longer than an hour and a half. The rain continued to steadily increase and after twenty two minutes I was riding under some power lines when I saw a bright white light upwards by the wires and a sound that I heard that I have no idea how to spell. Then there was the sound of thunder. I thought it was the wires that gave off the strange sound and the very bright light and not lightening itself, but which ever one it was I wanted to get away from the wires that I was more or less paralleling. I still wasn’t going to quit and turn around, but I was thinking a little bit more and trying to figure out if I was really lucky.

Everything except my torso that was covered with a rain jacket was wet. I could feel the water that had soaked through my neoprene boots and was now gathering in the toe area of my shoes. Shortly after the half way mark I made the big turn to start back to the north and the wind was now driving the cold rain in my face. The cool, wet ride didn’t seem nearly as bad on the first half, but now with the wind I knew I was really riding in increment weather.

Well, I made it home after one hour and thirty-one minutes and the mileage was 20.7 miles.

Now I have to pack for tomorrow’s canoe race and it’s still raining out with the temperature down to 39 degrees. The last forecast I heard, they are still saying snow less than one inch. I will drive and park my vehicle at the end of the race and then take their shuttle along with my canoe to the put-in. I will have to be outside a while before I start the race since the solo class is about the next to last group to start.
If it's raining further north this is going the cause the Snake River to rise more.
http://www.snakerivercanoerace.org/