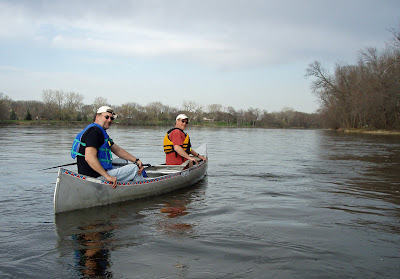 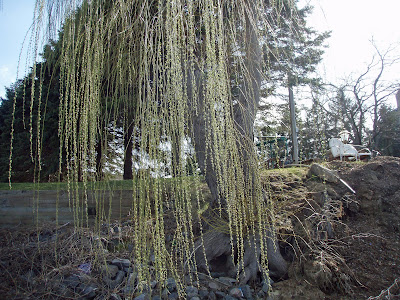 What a beautiful night to be on the Mississippi River. The temperatures were in the high 70’s. I arrived at the landing and took my C-1 off the Suburban. Another car pulled into the landing and I didn’t recognize the guy. He eventually walked over to my C-1 and began asking questions about if I was just starting, where I was headed, and how long I would be gone.

Those of you who know what I do for a living should know that I wasn’t to open about answering any of these questions. I began asking him some questions and he mentioned he was going to paddle tonight and he was waiting for Roland Ring-Jarvi. I recognized Roland’s name and he introduced himself as Bob Carrigan.
I explained to Bob my reluctance in answering his questions when he first approached me.

I remember Roland Ring-Jarvi and Bob Carrigan when they were at the Midwest Mountaineering Outdoor Expo last year giving a seminar on paddling the entire length of the Mississippi River. They both paddled the entire length, but over a 10 year period.

Roland pulled into the lot and picked up Bob and they drove off. Before they left Bob told me they were going to start at Roland’s home about 6 miles upstream of the landing . They were going to paddle a short ways upstream then return downstream back to his car.

I got on the water and began my upstream paddle. The water level was up at least 6 inches maybe more from the end of last week. I saw the eagle again in pretty much the same area I have noticed them in the past. Eventually he left the area and flew away from the river. I mentioned in an earlier post that the tree they had their nest in up until last year blew down. I’ve seen them now fly in the same general direction away from the river so it appears they aren’t nesting right on the river anymore.
Some of the trees are begining to bud out. Especially the Willows and Maples.

Both Roland and Bob in one canoe and Doug Berg and Dave Dahl in another canoe did the Missouri 340 mile canoe race last year. http://race.fit2paddle.com/C66311514/index.html

Roland, Bob and I chatted while we paddled back to the landing were my Suburban and Bob’s car was parked. I got back and noticed that Todd my friend and local DNR Conservation Officer had left his business card on my vehicle saying, hello.

Tonight’s paddle lasted 2 hours and thirty-five minutes.
Yesterday was a lifting day at the health club. I spent a little over two hours there.
I sent my money in to race in the Snake River Canoe Race. Looks like I'll be doing it in my C-1 in the solo class. It appeared most everyone else had partners in the C-2 pro class although I didn't look to hard. http://www.snakerivercanoerace.org/
Chuck