Second "Rookie Racers" of the Year 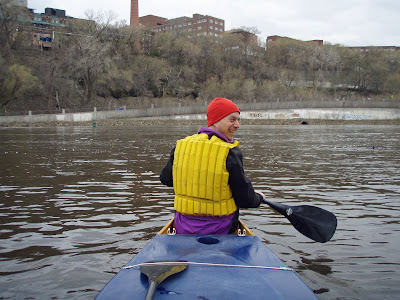 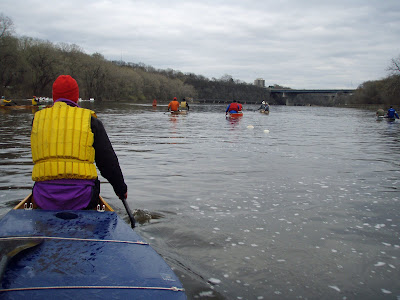 There was a small group that got together tonight to paddle. It was cloudy and cool, temperatures in the low 40’s but no wind.

I was paired up with Kurt and it was his first time to Rookies. Kurt and another guy, John, showed up to learn how to paddle correctly. There were (are) planning to do the Border to Border triathlon. I had heard earlier that it wasn’t going to be held but this was 3rd hand information.

We usually don’t get the Border to Border people out this early in the season to learn how to paddle. They usually come out when it’s much warmer out and shortly before the triathlon.

Kurt told me he had done a Quetico trip last year and he does the j-stroke. The j-stroke is a no-no in this group. The j-stroke is a very inefficient stroke and is never used in racing. Kurt also told me he never had been in a C-2 racing canoe before and I heard him mention something about an aluminum canoe. Well, that being the case, I though it was best that I wore my PFD tonight. The Mississippi River is still pretty cold. Kurt did well in the canoe

We got on the water a little late night at about five after six. The forward stroke seems very straight forward when it’s described to someone, but there’s a lot to think about when actually doing the stroke. New paddlers always revert back to their old style of paddling when they stop thinking about the stroke or only one part of it or when they get tired. A person needs to come out several times before grasping some parts of the technique.

Kurt has a lot to learn as all new rookies do, but he did a fine job on his first attempt tonight

The rowers were out tonight as well as one barge. We arrive back to the put-in after paddling for one hour and thirty-nine minutes. A short paddle tonight.