Earlier in the morning, 04-07-21, I went out to check on Hoot, the female Great Horned Owl, and the owlets. When I got out to the area I found Hoot, Give a Hoot, the male, and both owlets. I only got photographs of them.

So in the afternoon I decided to go back out and see if I could get some video. I got to the nest and saw Hoot standing guard over the nest. I took a couple photos of the owlets and of Hoot hiding above the nest.

Next I checked the area for Give a Hoot, the male. I located him relaxing about 50 yards from the nest. I took a few photos of him before I set up my tripod to take some video.

Shortly after I set up the tripod I saw Hoot fly my direction and land about 20 yards away, but she quickly flew off another 10 yards or so. She was probably wondering what all the laughter taking  place with me and Give Hoot was all about. :)  I was able to get a quick photo of Hoot before she flew back to the nest area.

Give a Hoot dozed most of the time up until shortly after Hoot flew away from the nest area at 1854 hrs. Not too long after Hoot flew off that some crows began making a racket near the owlets in the nest. I couldn’t see where Hoot flew to after she left, so it appeared to me the owlets were there by themselves, but I’m sure Hoot had everything under control.

Give a Hoot became very alert to the sounds of the crows by the nest. He began to do 18 territorial calls all the while looking toward the nest and surrounding area. This went on for over 15 minutes.

It wasn’t very long, but it seemed like it before I saw Hoot fly near us leading one crow away from the nest. She stayed perched in a tree over a 100 yards away from me, so about 150 yards from the nest.

I’m not sure if Give a Hoot started making his calls because of the crows, but from my experience Give a Hoot calls every night that I’ve spent out with them. Sometimes I can’t hear his calls while I’m out there because of the surrounding noises, but they are picked up by the external microphone. I have recorded Give a Hoot calling one evening around 35 times while Hoot was on the nest and he was in the tree next to her.

Give a Hoot flew from his perch at 1929 hrs in the direction he had been focus on for some time after he stopped calling. He stayed low to the ground and disappeared just inside the tree line, but I couldn’t see if he landed. He may have been hunting.

I had been using my 500mm f/4 Nikon lens with my 1.4x teleconverter for the photos and video, but I put on my 2.0x teleconverter to get a shot of Hoot perched in a tree in the distance after Give a Hoot flew off.

Before leaving the area I checked on the owlets in the nest and they were fine. 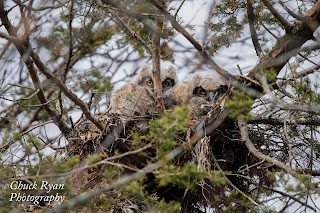 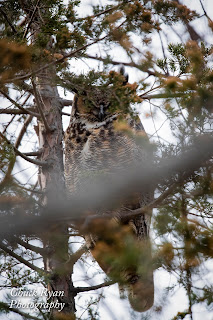 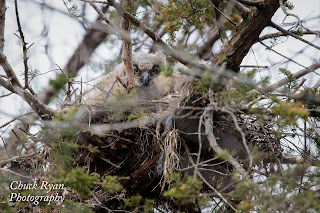 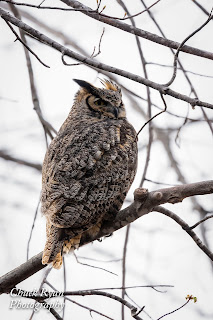 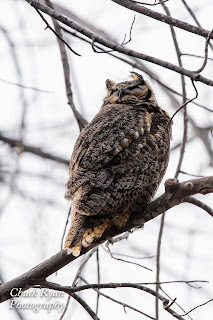 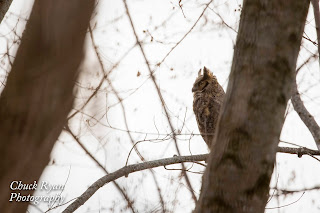 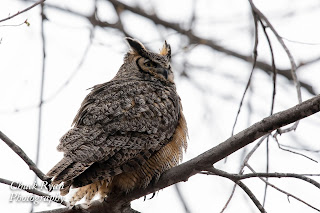 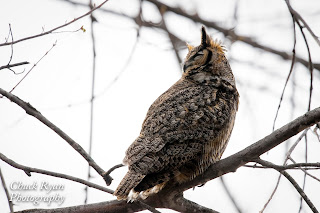 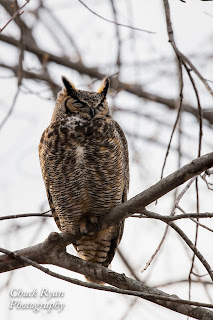 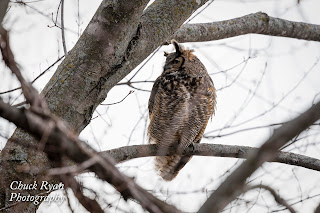 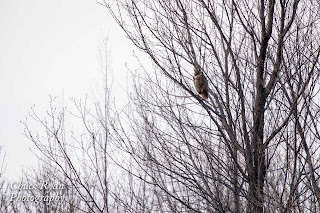 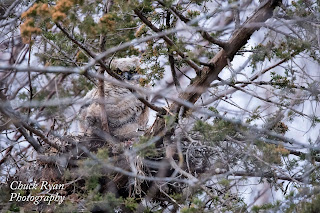