Great Horned Owlets…
Hoot’s Owlets
Here are my images from my three hour sit with the Great Horned Owlets on Tuesday, 04-20-21. It was another day observing, photographing and taking video.
When I got to the nest Hoot, the female, wasn’t perched above the nest. Prior to setting up I didn’t go looking for her or Give a Hoot, the male. It was early enough that I thought Hoot would be perched nearby.
Both owlets were sleeping while I set up my camera equipment. Almost an hour later the owlets began to fully wake. It seems like they do a double take when they wake up and wonder where I came from, but then they go about being an owlet. One of the owlets changed its position on the nest, then both owlets switch positions with one another. During the next hour the owlets took turns between being very alert to the surrounding sounds to snoozing. Eventually the snoozing won out.
I heard Hoot make a squawk call at 1915 hrs. I wasn’t exactly sure where she was located, but I reached down to turn on my digital recorder to record her calls. She will usually make several calls even if she just checks in on the owlets or comes to the nest. Well, today was different it was only one squawk and right to the nest. I missed her landing, but after reviewing the video clip Hoot landed at the nest and passed off a dead bird to the bigger, older owlet. Hoot was only at the nest briefly before flying to a tree closer to me.
The older owlet started eating the dead bird while making some noise by clicking his bill. While watching the owlets it appears that the smaller, younger owlet didn’t eat anything because of the more aggressive bigger owlet. It looked to me that the younger owlet was also very hungry as was the older owlet.
Hoot jumped a couple feet away to another branch so now she was headed in the correct direction to fly off and continue hunting.
Once the older owlet was done eating the bird, both owlets became much more active on the nest. When they started to slow down I decided to leave.
While walking out of the woods I saw Hoot in the distance actively hunting. Her head was locked onto something on the ground. She didn’t bother to look in my direction and I left without getting any closer to her than I was already. 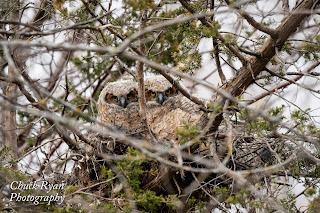 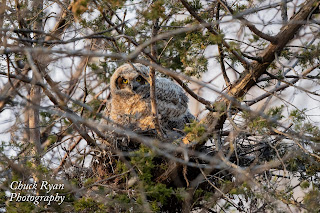 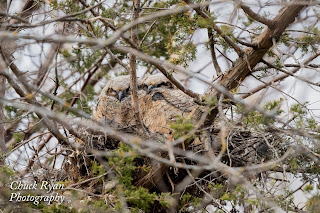 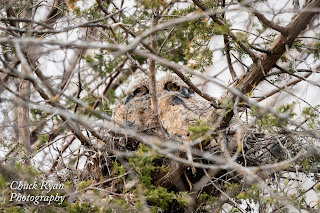 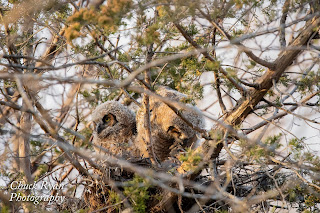 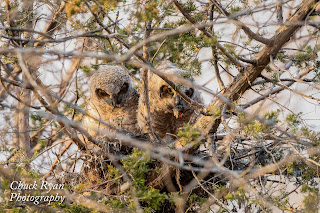 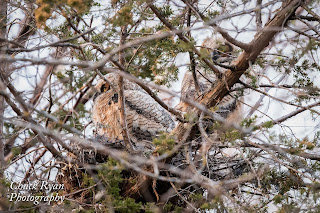 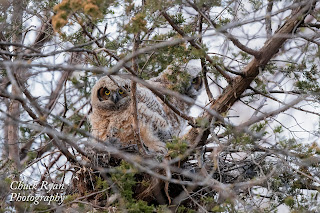