Hoot and her Owlets

I checked the nest area around 1630 hrs just after the rain had stopped. The owlets were huddled together and Hoot, the female, wasn’t around. The owlets weren’t going to be waking for another hour or two, so I checked an area for either Hoot or Give a Hoot, the male, but I didn’t find either one.

Next I walked to the the cedar tree about a 3/4 miles away for either adult. No one there, but there was a lot more white wash underneath the tree since the last time I found Give a Hoot there.

I walked back to the nest and set up my gear for what would be close to 3 hours. It started off slow as the owlets were still sleeping. About a half hour later the crows were mobbing either Hoot or Give a Hoot in the area where I looked for them earlier. I’m not sure if I missed one of them or if it moved there in the hour that I was gone. This crow noise and mobbing went on and off for 20 minutes or so.

It was about 1945 hrs that Hoot arrived at the nest with some food. I saw her coming and thought I turned on the video, but while intently watching the live view screen on the back of the camera I didn’t realize I didn’t start the video. Although, I realized my error just after she landed on the nest, then I started it. I saw that she came with some very dark or black colored prey. While Hoot was on the nest she continued with some squawk calls and Give a Hoot, the male, made one territorial call. This was the first time in a few days that I’ve heard him call near the nest area.

Hoot remained on the nest for a few minutes until it appeared the food was gone. Once she flew off I had a front row seat to watching both owlets start branching about the tree.

Today was the first day that I saw one of the owlets fledge and fly a short distance to another tree where it stayed for awhile. When it wanted to fly back to the tree with the nest it appeared it was trying to figure out how and to gain a little more courage to fly back. It made its decision and I think we were both a little nervous. Next, I saw the owlet land and I could almost hear the grip of the owlets feet tightening on the branch while at the same time flapping its wings several times to prevent falling backwards, but it made it. There wasn’t a whole lot of grace, but it accomplished it.

The other owlet didn’t fly but branched in the same tree. I expect it to fly in the next day or two.

I decided to pack up my gear at 2017 hrs. after all the excitement. While I pack up both owlets will usually sit in the nest and watch me, but tonight they were both perched at the end of the branch watching. 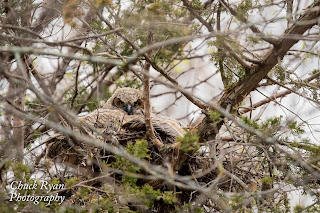 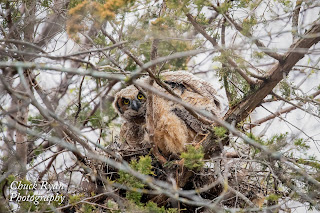 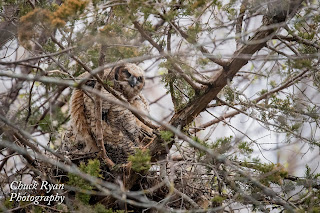 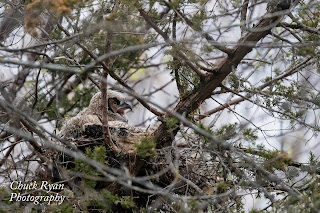 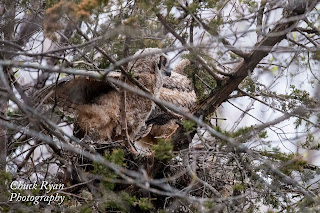 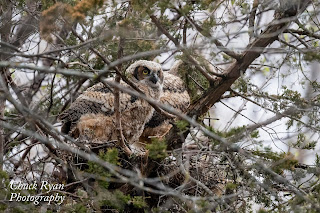 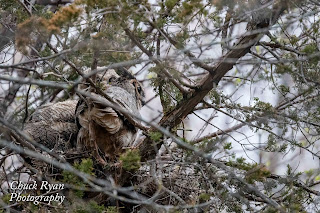 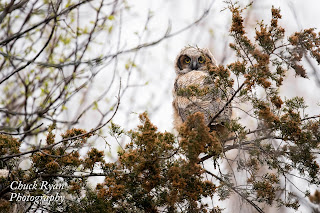 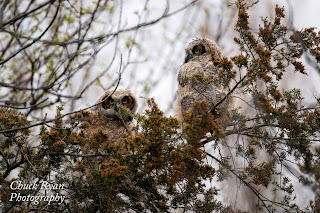