On Thursday, 04-08-21, I went out to check on Hoot, the female Great Horned Owl, and her owlets. By the time I got to the nest there was a light rain falling.

I got a couple shots of the two owlets in the nest while Hoot remained hidden in the cedar tree above the nest, but I’m sure with a watchful eye.

While I was there I decided to look for Give a Hoot, the male. It didn’t take me long to find him. He appeared to be sleeping, so I “quietly” walked in behind him where there was the least amount of underbrush to walk through and to make noise. I found a pretty good vantage point behind him and waited for him to turn around. I waited and waited. Nothing! He’s still sleeping.

I hoped he would make it easy on the both of us. I eventually walked a meandering way toward the front of him. I took a couple shots, but there was a branch in the way. I could have continued walking around him, but with all the undergrowth it would have been difficult and loud. It appeared he needed his sleep more than I needed a branch free shot. I’ll get one another day.

I made my way back to my backpack behind him and just stood still. After a few minutes he finally turned his head around, but just as quickly he turned it back to the front.

Here are the daily photos I got today… 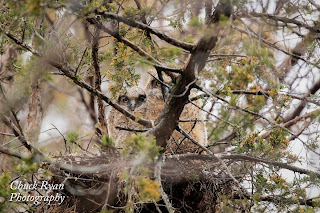 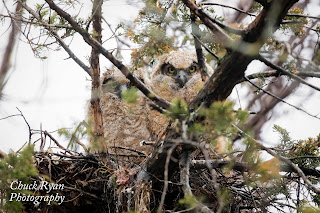