When I went out to sit with Hoot, the female Great Horned Owl, and her owlets on Sunday, 04-11-21, I found her on the nest with the owlets. For the past several days she had moved from the nest and has been perched over looking the nest from above.

It was about 1715 hrs when Hoot stated feeding the owlets with what looked like a rabbit that was already in the nest. The owlets initially had their backs to me while feeding, but before they were done they moved around facing me. Hoot was still feeding the owlets went I heard the crows mobbing something in the distance, but not from Give a Hoot’s normal area. Although, in a few minutes I would find out it was Give a Hoot being mobbed.

Give a Hoot showed up with a few crows following him, before he landed about 30 yards from the nest. Hoot began doing some soft squawks to him. Before too long Give a Hoot brought with what looked like a bird to the nest. He left the prey, then flew off landing about 20 yards before starting some territorial calls. Eventually, he flew further away from the nest area. This was the first time I saw Give a Hoot bring food to the nest. He dropped off the prey about two hours before sunset.

I watched the owlets for a bit longer before packing up my equipment. Today I observed them from 1630 hrs to shortly after 1900 hrs. 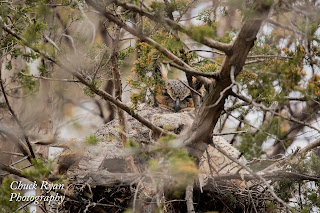 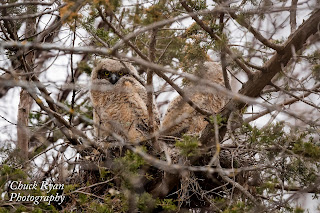 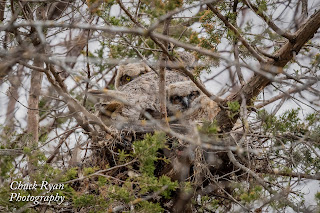