Hoot, Give a Hoot and the Owlets…

My plan for Thursday, 04-15-21, was to go find Give a Hoot, the male Great Horned Owl, to get some photos and video. I had seen him earlier in the day, but when I went out later I couldn’t find him.

So I set up on Hoot, the female, and her owlets. I took mostly video while at the nest. Hoot looked like she was feeding some rabbit to one of the owlets after she woke up. The other one was facing away and didn’t seemed to be interested in any food. Once they all woke up the owlets were pretty active.

Hoot eventually flew off the nest and the owlets seemed to be content in just quietly sitting in the nest. They looked at me and I looked at them back. :) One of us had to make the first move so it was me. :)

I decided to go look for Hoot to see if I could get some photos of her off the nest. I actually found both Hoot and Give a Hoot. Since I was only 15 yards from Give and Hoot I started taking some images of him. Hoot had her back to me.

Then within a couple minutes the tornado warning sirens went off. Give a Hoot wasn’t to alarmed at first, but when the sound from the rotating siren pointed his direction he had enough and flew off. I got a picture of him with his eyes wide open with the look on his face as to say “What the hell is that?” before he flew off.  Hoot actually flew closer to me to another tree, so I swung the camera around and got one image of her with the alarmed look on her face, before she flew off.  It certainly didn’t help that the siren went on for at least 5 annoying minutes.

Well, I’m pretty sure both owls would be pretty agitated after that, so I called it a day. 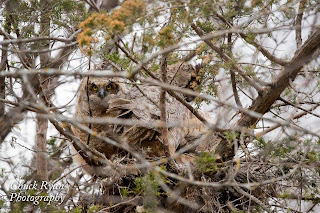 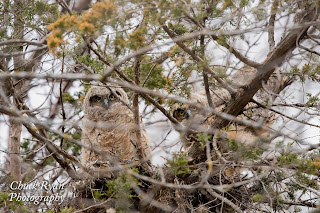 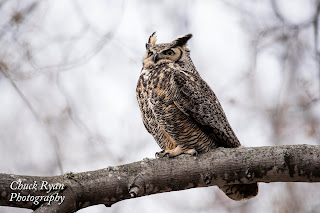 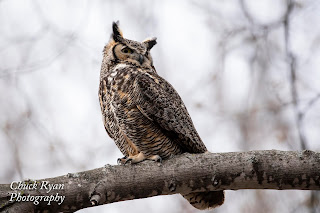 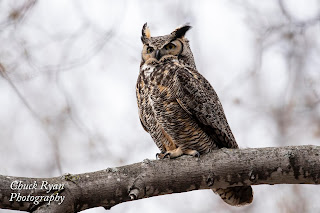