On Monday, 04-12-21, the rains were supposed to continue until the early evening hours, so I decided to just go out and take the daily photo of Hoot, the female Great Horned Owl.

When I got to the nest the owlets were huddled together and they didn’t even bother to look at me. Hoot was perched off the nest to the side, so I took her daily photo.

I walked by one of Hoots favorite cedar trees and who do I see perched snoozing away…Give a Hoot! I located him in the cedar tree with his back to me, so I walked around to his front and set up my tripod and camera. Once I made a couple minor adjustments with the tripod to get a couple small branches out of his face I now had a good view of him. He continued to sleep while I set up and make these adjustments.

I located Give a Hoot shortly before 1600 hrs. He would occasionally open his eyes and look around, but he mostly slept while I was there.

While sleeping Give a Hoot must have heard something or he just had something to say, because he woke up and started doing some territorial calls. I was able to turn on the video just as he started his first call. After a few calls he went back to sleep.

Since I had a fairly good view of Give a Hoot, I decided to take some photos of him once he woke up instead of doing any more video.

When Give a Hoot woke up he must have over slept and realized he needed to be somewhere, because all he did was stretch his wings before flying off.

During my times watching Hoot wake up she goes through a more thorough wake-up routine. Besides doing the wing stretch she’ll scratch her face with her feet, rotate her head back and forth, do a couple leg stretches followed by some preening.

Give a Hoot flew off at 1749 hrs so I packed up and walked back to see Hoot at the nest. Hoot was now perched 180 degrees from when I stopped by two hours earlier. I think she was getting ready to fly off to meet up with Give a Hoot. I decided not to take another photo at the nest and left the area so she could fly off and meet up with him. 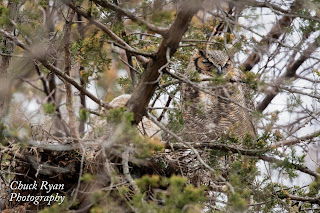 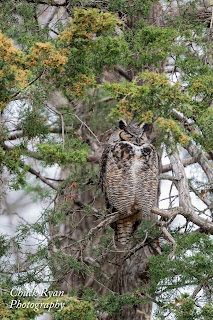 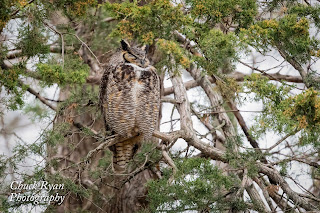 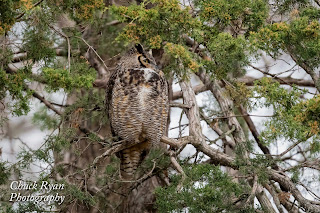 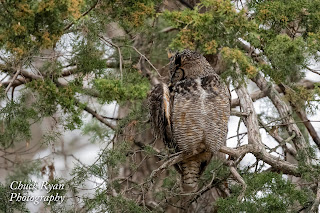 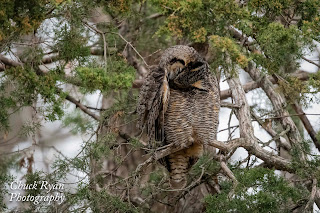 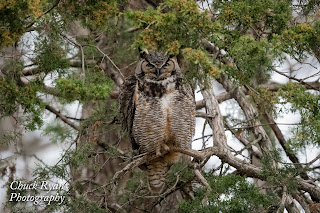 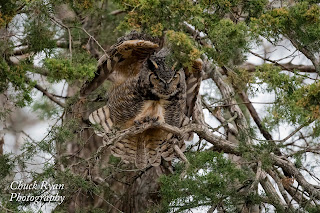 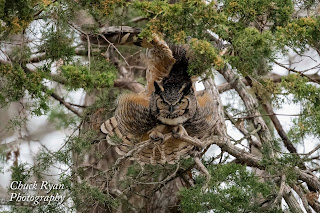 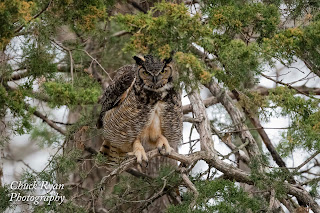 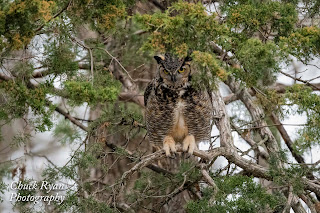