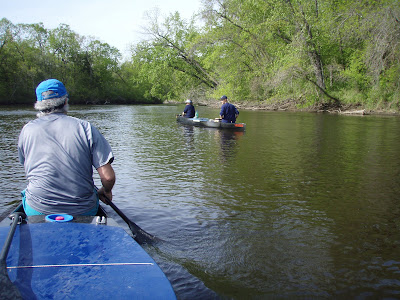 The wind was going to pick up during the day, but when I got up at 0600 am it wasn’t too bad. It was a good thing we would be paddling on the Rum River today with the wind expected to be between 20 to 30 mph.

The group was going to meet at 0900 am, but Ed and I were going to start at 8 am. I arrived at the Anoka Fairgrounds at 0740 am since I needed to do a couple things to my C-2. Ed arrived shortly before 8 am and we were on the water paddling at 0803 am.

The Rum was down about 3 feet from its highest level this spring. There was plenty of “suck” water to paddle in today. Ed and I would later talk to some homeowners on the river who told us the city plan to close the dam on the 26th. The water level should go back up when they close it.
I wanted to do six hours today and I knew Ed had committed to four. We paddled up to island and turned around. We got about a half hour from the landing when we came across Anne and Joe Manns. They started a little before the rest of the group and they wanted to get some time on the water before heading up north today 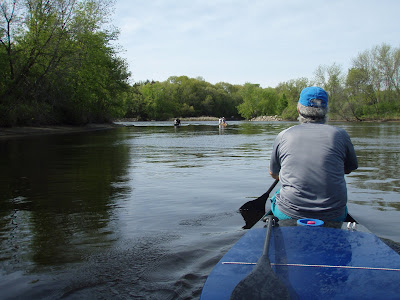 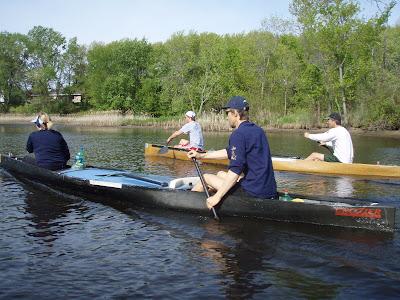 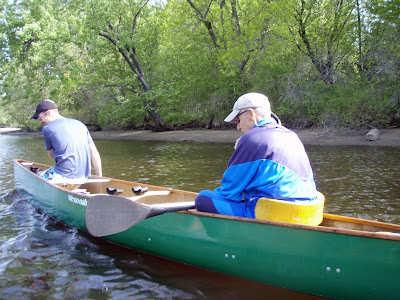 We all turned around now and headed back upstream. There were 11 C-2’s out today. There were a few time times going upstream when I looked up ahead and all I saw were canoes moving in different directions on the water. It reminded me of water bugs dancing on top of the water.

Once we got up to the island I know a couple of canoes turned around to paddle back with Dan Hassell back to the landing.

A short distance upstream of the island, Joe and Anne turned around after saying good-bye to Ed and I. Ed and I pushed on up to the 7th Av bridge where we would take a 12 minute break. The rest of the group wanted to stop about 10 minutes before the bridge, but Ed and I continued toward the bridge. Everyone decided to follow us and we took a break as a group. 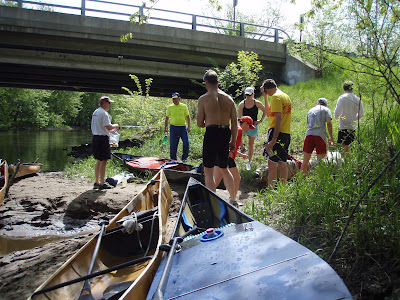 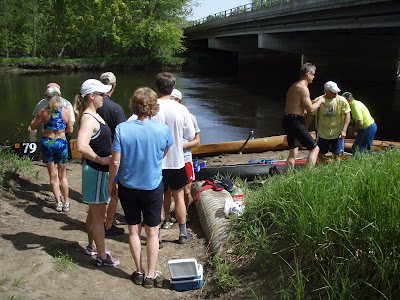 Ed and I decided to get back on the water after 12 minutes. This spurred the rest of the group to get going. I noticed a few of the paddlers had switched paddlers for the downstream portion.

The wind wasn’t really a problem on the Rum. There were a couple spots where it was really noticeable, but I could hear the wind blowing through the trees. I knew the wind would cause me some problems in my C-1. I still would have a couple more hours of paddling when I got back to the landing.

Shortly before the landing Ed told me that he would continue paddling with me. I really appreciated that Ed decided to continue paddling; but he needed to stop, get some more water and check on his dog. The total paddling time back to the landing was four hours and nine minutes for Ed and me. 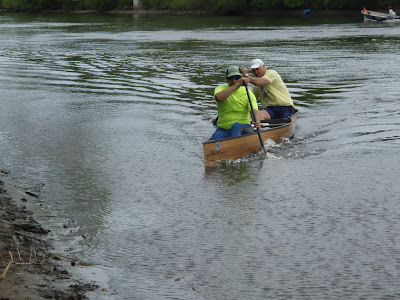 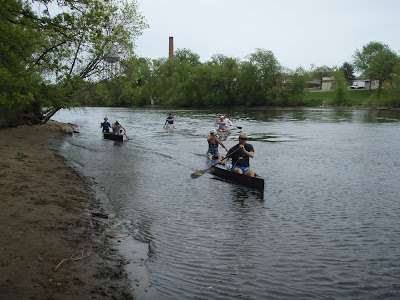 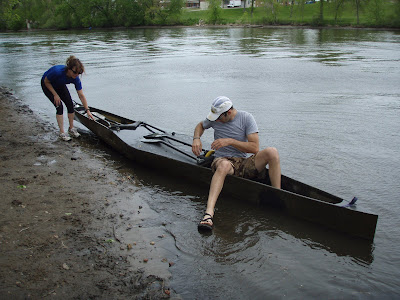 I stayed down by the landing as the other canoes came in to see if anyone else wanted to continue, but there weren’t any takers.

Ed and I got back in the canoe after our muscles had tightened up. Ed at one point told me that he either had no strength left in his stroke or else we were in suck water. I promised him we were in the suck water and from then on we paddled away from shore in the deeper water.

I kept asking Ed questions in the hope to keep his mind off paddling. It seemed to work because we made it back up to the island in one hour and four minutes. Ed commented that he didn’t realize we were moving at such a good clip. I wanted to go up a little further before turning around to make sure I got my six hours in today. We eventually turned around at the Boy Scout Camp.

We continued our talking as we paddled downstream. The river was alive with activity today. I believe today was the opening day for bass fishing. I even saw my neighbor, John, fishing from his kayak. John had recently found the pleasure of paddling on the Rum River.

Ed and I paddled a total of six hours and eight minutes today. Thank you Ed for the enjoyable paddle. I really wanted to put in a longer day, but Ed didn’t have to.

I looked at the Mississippi River when I crossed the Champlin Anoka Bridge on my drive home and the wind was really kicking up the waves. It definitely wouldn’t have been an enjoyable day on the Mississippi.

Io Harberts and I plan to be on the water at 0700 am tomorrow to get in a couple hours of paddling before the rest of the group shows up at 0900 am. I will then paddle with Ed at 0900 hours. 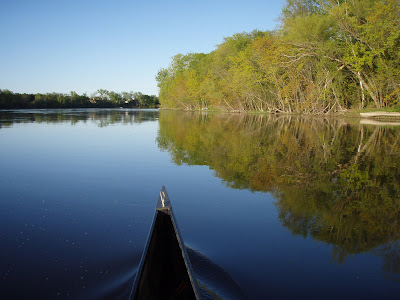 I thought I would post this picture from last Wednesday's paddle on the Mississippi River.

Chuck
Posted by CIIcanoe at 8:24 PM