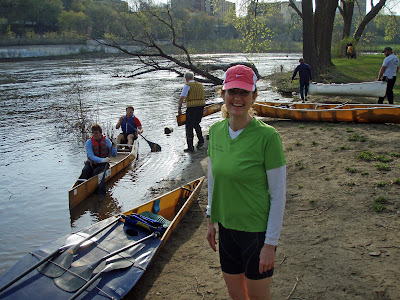 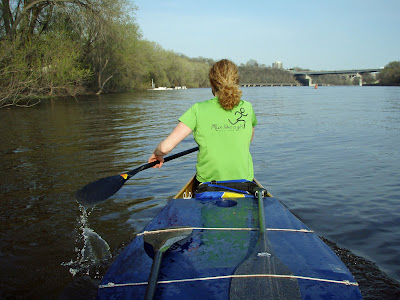 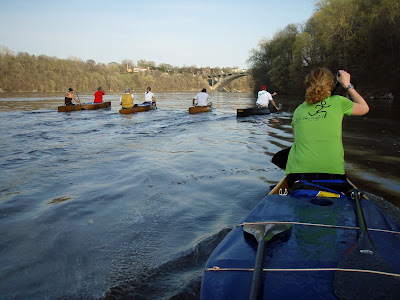 Tonight when I was driving to the East Bank the temperature was 69 degrees. I believe this has been the warmest day for Rookies so far, but again it’s only the 3rd one. What really made it nice was that there wasn’t any wind to speak of.

We had a few new faces that showed up tonight who were new to me, but I hadn’t been there for a few years. We were all given a number. The magical number was 19. The two paddlers numbers needed to add up to 19. I was an 11 and I was to paddle with the person who had the number 8.Then that changed because two “rookies” showed up so I was going to be paired up with one of them. Then it changed again and I finally got to paddle with Julie Reddan.

Julie told me she came last year about 4 or 5 times, but tonight was her first time paddling this year. However, she does many other sports activities. She told me there isn’t enough time to do all the activities she would like to do. I told her that’s why I pretty much stick to paddling and some biking.

We got on the water at 5:59 pm. Julie and I paddled upstream while a very large barge pursued us. We turned around about where we normally turn around but there weren’t the usual number of canoeist coming our way. There were only two and they were going to catch the last canoe upstream that hadn’t made the turn to come back downstream.

Julie and I continued downstream and the rest of the group was far ahead of us near the I-94 Bridge. I know none of them paddled upstream to be that far downstream from us.

When we caught up with the group I counted 10 C-2’s and two C-1’s. Brett Arenz was using my C-1 while someone else used his.

Julie did a fine job tonight. I reminded her a few times to fully grip the paddle with her lower hand and to reach out more to get full extension before anchoring the blade of the paddle in the water. She had nice rotation. Nice job, Julie!

Julie was trying out different paddles tonight and plans to purchase one soon. For now she is going to get a ZRE 48 inch, medium weight paddle. I gave her a phone number to call and get one.

Tonight’s paddle lasted one hour and fifty minutes. It was a nice night to be on the water!