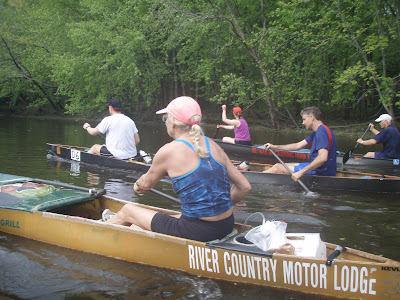 Not much to report today. Only four C-2’s took the water today. Today was a short paddle, but I would have gone longer if anyone else wanted to go. It’s tough when I want to paddle longer hours for training for the AuSable, instead of doing shorter more social paddles. Although, Ed and I did a shorter paddle today we did do several sprints in the shallows. It was a good workout.

Some paddlers wanted to turn around before the island today when we were only three minutes from it. A couple of us continued on and the others followed. It took us one hour and three minutes to get to the island and forty-five minutes on the return.

John and Kathy Sullivan were just going upstream past the landing when we got there. I talked Ed into paddling back up to the first bridge, but the Sullivan’s were a ways a head of us by the time we turned around.

The Sullivan’s pulled to the left shore just before the bridge. I wasn’t sure what they were up to. John Sullivan attempts to get out of the stern and immediately falls face forward into a push-up position in the deep mud on shore. I couldn’t hear what was being said, but I imagine Kathy might have been laughing once she knew John wasn’t hurt. I didn’t have my camera ready at the time and I missed the opportunity to get a picture. 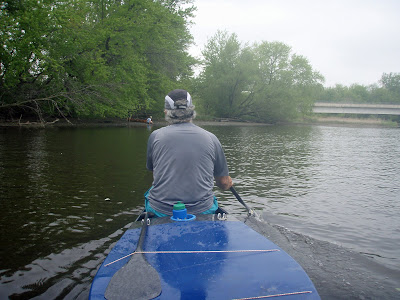 We continued to watch and then John went to the bow and Kathy goes to the stern. It appears they are going to carry their canoe from the water to shore. Kathy grabs the stern of the canoe and she immediately fell in the mud on her bottom. This time I was able to get a picture. It was John’s turn to laugh. We paddled up close to them and they said they were practicing their portages.

Ed and I turned around the bridge and made it back to the landing for a total paddling time of two hours and eighteen minutes.

Later, I got my Mountain Bike out and went for a ride. Again, I did the 20.7 mile loop for a time of one hour and twenty-seven minutes.

Today started with bright blue skies, but during the paddle it turned cloudy and stayed that way all day.

This Thursday is the first Hoigaard’s race so I guess I need to find a partner otherwise I might just have to do it in my C-1.

Chuck
Posted by CIIcanoe at 6:57 PM