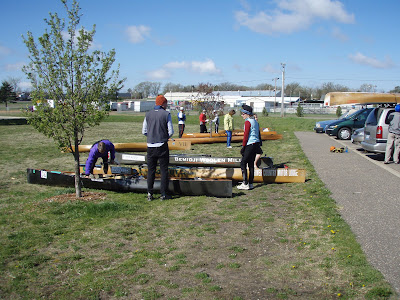 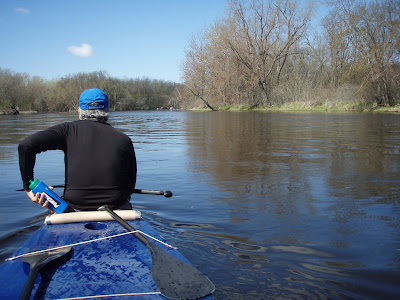 Bonnie Peterson brought her family to today’s paddle on the Rum River. Bonnie paddled with Todd Johnson. Her husband, Steve, paddled with their daughter Anna. Their two other children, Ryan and Emily paddled together. It sure was nice that Bonnie allowed her family to paddle with her today.

The parking lot started filling up cars belonging to the racers prior to 0930 am. Ed arrived and threw his gear in my C-2. One of the other canoes started going to the river so Ed and I followed. Actually Ed and I did a slow trot down to the river. We were on the water at 0937 am.

Ed and I are doing the Rum River Flag Race together next Sunday so we thought we better paddle at least once together.

Ed and I paddled up to the first Bridge and waited for the rest of the canoes. People were now taking off an outer layer of clothing since they had warmed up. Ed and I tried to “pop up” the canoe in the shallow water in several places, but all we found was suck water. Only one time did we find a shallow area where were able to pop the canoe up and that was on the way back downstream on the inside corner of the last bend five minutes from the end.

After the bridge Ryan and Emily decided to run the portage since they are doing the Chippewa Triathlon. I don’t think anyone else joined them. This portage is fairly long and it will get the heart beating. This could be one of the reasons no one joined them.

Lets see if I can remember who was paddling today. Again, it was Todd and Bonnie; Steve and Anna; Ryan and Emily; Devin Arenz and his girlfriend, Natasha; Rick Lorenzen and another Natasha; Julie Boehrer and Dave Dahl; Steve Yurista and George Stichlier and Ed and I.. 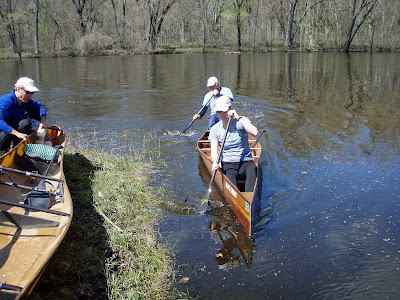 Devin Arenz and Natasha turned around just before the island. Natasha has just started getting into canoeing. Everyone else continued up to a park for a break that I don’t know the name of. We got to the park after almost two hours of paddling. We were at the park for about 10 minutes. I spoke to Anna since I understood she hurt her right shoulder during the ski season this year. She said the shoulder is much better, but it appeared she was in pain when I spoke to her by just the way she was sitting on the ground, upper body slumped over and her arms crossed in front of her close to her body. She didn’t complain though but she was in obvious discomfort or at least that was the impression I got. Bonnie explained some of the treatment she has been receiving for on the shoulder/ muscles. The other thought was she was trying to warm up, but later I spoke to her sister, Emily, who said Anna was in pain. Anna, I hope you get to feeling better soon!! 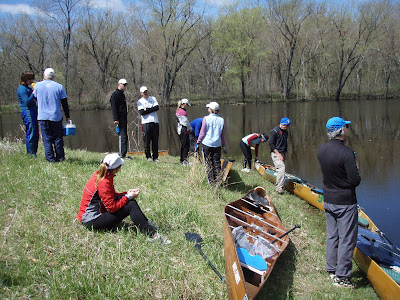 Steve Yurista, George Stichlier, Ed Arenz and I decided to paddle further upstream to the 7th Av Bridge that was twenty minutes away while everyone else decided to head back downstream.

Ed and I paddled with a good cadence with some sprinting, of course. We paddled for three hours and five minutes. Once the four of us were in the parking lot I asked George how his paddling went today and he told me he’s good for two hours and forty-five minutes. He was exhausted. George told me he hasn’t paddled for three hours before. I told him he can look forward to longer paddles or more intensity on the shorter ones.

Ed and I went to Dunn Brothers to see if the other racers were still there and most of them were there. George couldn’t join us since he had to get home and do some things with his family.
Later on in the afternoon I went for a bike ride on my road bike. When I went to get my bike the rear tire was flat. Instead of of changing it, I pumped it up and it seemed to be holding. It had done this before recently, but I should have known better. Anyways after twenty minutes of riding I felt the tire going soft. After changing out the inner tube I was back on my way. I went for one hour and twenty one minutes for 20.7 miles.