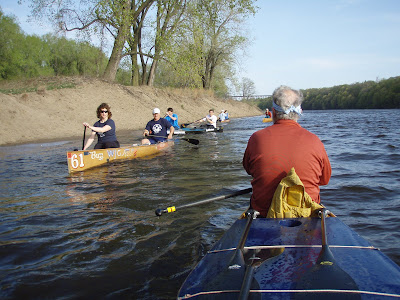 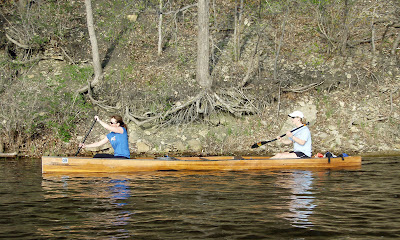 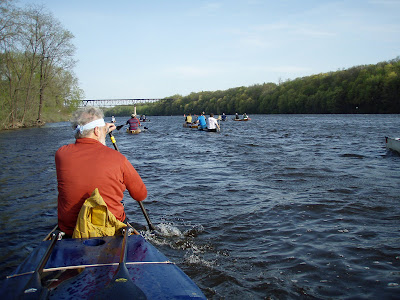 The wind had been howling all day out of the SE. This was going to possibly make tonight's Rookie practice very interesting depending on how many rookies show up. The temperature was in the upper 60's

When I got to the East River Flats Park there were several people standing around. There was a teenage girl and probably her father who I've never seen before in the lot, but otherwise the other faces I recognized.

Joe Conrad and Rick Lorenzen are now running the show at Rookies so I don't have to go around and pair everyone up together. I took my canoe off my Suburban with the help of Mike Davis. I spoke briefly with Mike at the Snake River Canoe race and he recently moved here from Grayling, Michigan. For those of you who don't recognize the name of the town, Grayling is where the start of the AuSable Canoe Race begins.

Prior to getting on the water I spoke with Jason Larsen who is moving to Ashland, Wisconsin at the end of this month to start a new job with his wife, Stephanie, and their two children. Jason is an excellent paddler who has helped many racers in teaching them proper racing techniques and strategies over the years. Jason and Stephanie will be missed by everyone here in Minnesota. Jason and Stephanie are originally from the Escanaba area of Upper Michigan. 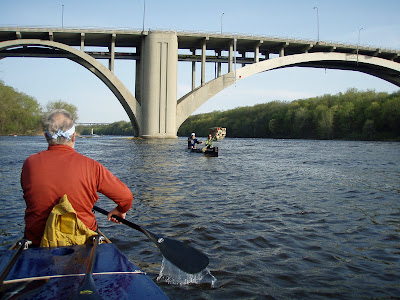 I also introduced myself to Devin Arenz's girlfriend, Natasha, since I didn't get a chance to talk with her yesterday on the Mother's Day paddle on the Rum River. Natasha told me she is new to canoeing. She maybe new to paddling, but she has a very good partner to learn from.

It appeared most of the people had paired up on their own, except for the very new people, so that left Rick Lorenzen, Joe Conrad and I. Last week they used a number system to pair the paddlers up, but I never heard it mentioned this week. Joe and I paired up and Rick used my C-1.

Joe and I made it to the water and put in at 0555 pm. We were the first ones in the water. We paddled upstream like we normally do before turning around to join the rest of the canoes. Joe was paddling in the bow and I was in the stern. We were bow down to entire paddle. Joe was as far back as he could get, but it wasn't enough. I would just have to deal with it and I did more correction strokes than I want to admit.

The river current move moving swiftly downstream while the strong SE wind was blowing upstream causing some nice size waves in some areas. Joe was looking for a spot to cross the river to the west side of the river, but I could see some nice size white caps toward that side. I recommended that we all stay close to the east shore the entire time. The risk was not as great if we had to do a rescue close to shore as it would be in the middle of the river if someone when over. 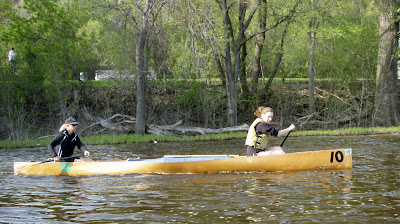 The younger girl, who I later learned was named Sarah, and she was paddling in the bow of Io Harberts racing canoe. Her father was paddling with Kevin Striver in Kevin's recreational canoe. Kevin asked Joe to assist Sarah's father on his paddling technique. Joe and I pulled along side of their canoe while Joe verbally gave him some pointers.

Joe and I paddled on and up ahead I saw that the wind had taken Io's canoe and was pushing it at a 45 degree angle right for shore with Sarah in the bow. Well, they make it right to shore and I mean right on shore, but of course that wasn't their intention. Sarah wasn't sure what she could do in that situation. Io told me there wasn't anything she could do so she just rode it out plus the fact that the shoreline was sand in that area.

I got up along side Sarah and showed her how to do a draw stroke. It appeared Sarah was familiar with the stroke, it's just that she has to remember when she needs to used it. I find it's quite common for new people sometimes they forget to do something not because they aren't familiar, but there is so much going on. In this instance, the strong current, large waves, wind and unfamiliar racing canoe all compounded Sarah's situation.

Sarah did a fine job. It's tough to learn proper techniques in the conditions like today. Back at the landing I asked Sarah how much paddling she has done in the past? She told me she has taken canoe trips up to two weeks long in Quetico and some shorter ones in the BWCA with Camp Wijiwagan out of Ely. 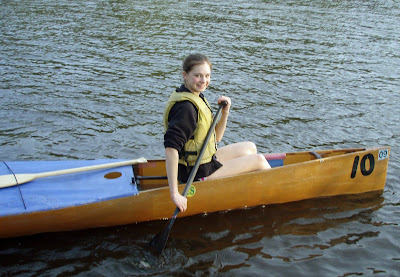 There were a total of 19 people tonight at Rookies. The only new paddlers were Sarah and her father. Kevin and Sarah's father along with Rick turned around about three quarters of the way downstream while everyone else continued on.

After we turned around and headed back upstream, the wind was now to our backs and it sounded much quieter. I continued to have steering problems due to us being so bow down. With some of the following waves it felt I was in a high chair. I let Joe know that I normally don't paddle like I had been tonight, because Joe and I have never paddled together before so I knew in the back of his mind he was thinking otherwise.

We arrived back at the landing at 0737 pm making for a one hour and forty-three minute paddle. 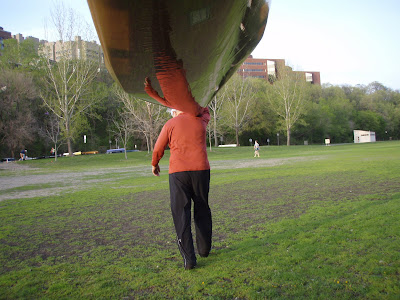