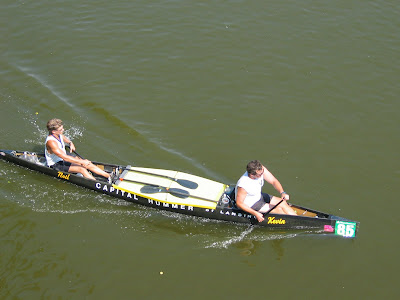 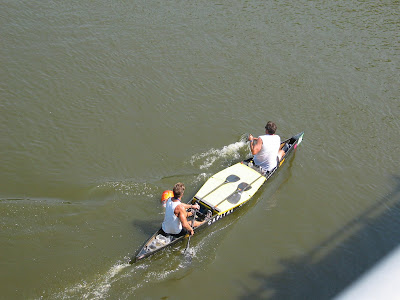 (I didn't have my camera with me yesterday, so I thought I would post a couple photos from August 17, 2003. This is Kevin LeRoy of Wisconsin in the bow and that's me in the stern, not Neil. This was the Mississippi Classic.)
Wednesday night, 05-07-08, I went for a paddle on the Mississippi River. I forgot my camera. The current was mighty fast. I didn’t paddle right along the shore going upstream, but out in the main current so I would have a good work-out. I just did a steady, hard paddle upstream for 1 hour and thirty minutes. Coming back downstream it only took me thirty –five minutes. I was flying! The total time on the water was 2 hours and five minutes.

On Tuesday I actually was doing one minute on / one minute off intervals coming back downstream. It felt good to change it up some.

I made arrangements to race with Ed Arenz in the Rum River Flag race on May 18th. This is a race where we will paddle upstream and when we turn around to come back downstream we have to move close to shore and grab a small flag that is stuck in the ground. Then the flag must be placed somewhere on the canoe where the flag is upright. I’ve always stuck it with the water bottle in the hole behind the bow paddler. There is prize money in this race.

Since I’m back in shape I should start asking around on who would want to do the AuSable Canoe Race with me this year.
Chuck II
Posted by CIIcanoe at 10:12 PM