Hoigaard's Canoe Derby and other things I did this week... 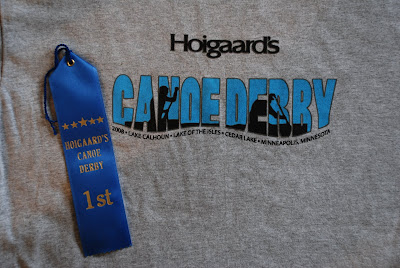 Kate Ellis called me earlier this week and wanted to know if I would paddle with her this Saturday, 05-31-08. I told her I would and I asked her if you had a partner for the Hoigaard’s race on Thursday. She told me she was going to paddle with Joe Manns. I told her that I didn’t have a partner yet and if she heard of anyone needing one to let them know I was looking for one.

A few hours later I received a call from Todd Ellison. He was looking for someone to race with him. I accepted.

Thursday, 05-30-08, arrived and there was the possibility of severe storms in the evening. The day was cloudy and cool with a strong SE to ESE wind blowing. I checked the flag from my office several times during the day. I knew if the wind continued to blow from this direction with the same intensity that there were going to be some big waves on Lake Calhoun.

There were a couple storm fronts that were south and north of the Twin Cities when I got off work at 5 pm. The rain started as I walked to my Suburban. My other concern besides the wind was if there was any lightening the race would be cancelled.

There were several vehicles with canoes on top parked in the Thomas Beach lot when I pulled in. I attempted to pay the parking meter, but it appeared it was broke. I later spoke to a Minneapolis Parks officer who said they weren’t enforcing the parking today.

The temperature was in the upper 50’s when I got there and I realized I didn’t have any long pants to wear before the race. I put on my light weight wool long sleeve top and my Pearl Ozumi light weight rain jacket to stay warm.

Hoigaard’s had the sign in area set up already. I went over and paid for tonight’s race, signed the waiver and went back to my Suburban. Todd arrived and helped me get my canoe off the Suburban and then he went to pay his entry fee.

The race doesn’t start until 6:45 pm, but Todd and I got on the water at 6:15 pm to warm up. It has been about 5 years since Todd and I have been in a canoe together. We went out to the first buoy to see where it was located. The waves were going to be a problem. Both of us would have to work to keep the canoe going straight and stay upright. We paddled back to the finish buoy that was close to shore and we practiced a couple buoy turns.

While we were doing that most of the other racers were either warming up or lining up for the water start. Time was approaching 6:45 pm. We lined up toward the upwind side of most the other racers. Joe Manns and Kate Ellis tried to get on our up wind side so we moved further up wind.

It had been a while since I did one of these races and I couldn’t remember how the start signal was given. I saw Joe Manns looking back toward shore at the Hoigaard employees and it appeared we had another minute or two before the start. The horn went off and it caught me by surprise. I wasn’t ready to paddle but I quickly recovered and off we went. Todd and I appeared to have the lead and I was doing everything I could do to stay in the canoe while paddling. The further out we got the larger the waves got. Todd and I were focused on the area where the red buoy was located near shore toward the NW portion of Lake Calhoun.

There were a couple canoes that were to our right and back a little when I heard someone say something to the fact, isn’t it a white buoy. I looked over to the canoes that seemed to be on a different line that us, because we were heading to the red buoy. I scanned up ahead and I couldn’t see any other buoy. We stayed on course and these canoes moved over toward us.

Todd and I rounded the first buoy first, but Joe Manns and Kate Ellis were with us. I don’t know how close anyone else was behind us. We now headed to the NE section of Lake Calhoun headed toward Lake of the Isles. I t was nice to get out of the waves, but now there would be a sprint between the two water ways.

Todd and I lead most of the way, but Joe and Kate would either be riding our side wake or stern wake depending on where we were. When Joe and Kate would get past us we would ride their side wake. After we both got around the second buoy we now double back toward other racers. It appeared we both had a substantial lead on the other canoes.

Todd and I began the sprint to the buoy. We went around first, but Joe and Kate were right beside us. The wind was affecting Cedar Lake more that any other time I could recall. Joe and Kate just rode our side wake across Cedar Lake. I could hear the two of them talking. I remember hearing Joe tell Kate, your doing ok or we’re ok.

As we approached the water way with the concrete wall Todd told me to keep the canoe close to it. I knew we would get in the shallows and pop the canoe up. We hit it first and pulled ahead of Joe and Kate by a couple canoe lengths. That didn’t last long, because they pulled up with us after we got on the Lake of the Isles.

We both got around the next buoy and were now heading south across Lake of the Isles back toward Lake Calhoun. We all stayed together, but after we got into Lake Calhoun Joe and Kate pulled ahead of us. We were now back in the waves and the waves were even bigger on the way back.

It was obvious that we were not going to catch Joe and Kate. The both of them were doing a fine job in the waves. Now I just wanted to make sure we stayed upright. Slowly the bailer drained most of the water out of the canoe by the time we reached the final buoy.

There were a few teams that went swimming tonight. I know Io Harberts and Emily Peterson went over. I heard George Stichlier and his partner did, also. I think there were two more teams.

After the race were able to pick up our t-shirts and the teams that finished 1st, 2nd and 3rd received their ribbons.

I spoke to one of the Hoigaard’s employees and asked him once the results are typed up to e-mail them to me and I would post them on my blog. Hopefully that will happen.
-----------
On Tuesday, 05-27-08, I decided not to paddle since I paddled several hard hours over Memorial Day week-end. I decided to run for 30 minutes instead, then I went to the health club and did some leg extensions and leg curls.

Wednesday, 05-28-08, I went out in my C-1 on the Mississippi River out of Champlin and paddled for two hours and ten minutes. When I got home I typed up a letter and e-mailed it off to a potential sponsor for the AuSable Canoe Marathon. I had spoken to the person with the company earlier in the day and so I knew where to e-mail it. If it happens I’ll be sure to let everyone know!

If anyone else wants to help sponsor Bill Briggs and I for the AuSable Canoe Marathon just let me know.

Today, Friday, 05-30-08, I didn’t have to work so Ed and I paddled the Rum River. We planned to paddle at 1000 am. Several hours before we started there was a light mist/ drizzle. Shortly after we started paddling it stopped and it actually was a pleasant day to paddle. The temperature when we started was around 58 degrees. After the clouds started to beak up it was in the low 60’s. There was no wind while we paddled. The river was very smooth.

Ed and I went up to the 7th Av Bridge and back. When we got back to the landing it was 2 hours and fifty-five minutes of paddling. We decided to go for five more minutes to make it an even 3 hours.

Next, it was off the health club for leg extensions and leg curls followed up with abs and stretches.

Since the day turned out fairly nice, I decided to go for a bike ride. This time I went with my road bike for an hour and twenty two minutes.

Tomorrow, I plan on paddling in the bow with Kate Ellis in the stern. We are starting at eight while the rest of the group will show up at nine.

Sunday is the Jensen Handicap Race on the Mississippi River where an experienced racer is paired with some one new person. I’m not sure what time it begins, but if I recall from past years it was noon. The race usually last less than an hour. Pot luck to follow. Since I haven’t seen anything about this race on paper or website this is usually what takes place.

My neighbor e-mailed me today inviting me to a bike ride that a group of them go on at 3 pm on Sunday. Depending on the time of the canoe race on Sunday I will try to make it. I’ve been invited in the past, but there has usually been something else going on at that time. This will be a social ride.

Today, 05-30-08 I received a copy of the June Issue of Silent Sports. Check it out! The article I wrote on the Snake River Canoe Race is in there, a picture of me in my C-1 during the race from Skinnyski.com and a photo I took.