On Thursday, 12-30-21, I went out looking for the owls. While searching the area for them I came across two two dogs running loose in the woods. One spotted me while I stood motionless, before it ran back in the direction they both had come. Then I heard a female voice. She saw me when  both dogs began barking at me which seemed like forever. All she kept saying was they don’t bite.

Well, besides having to alter my route since the direction she was going was the area that I had a better chance of finding the Great Horned Owls. Now I thought there was no way I was going to locate any owls today after that loud disturbance.

I changed course and walked the general direction they just walked. Still thinking I wouldn’t see any owls I spotted Give a Hoot, the male Great Horned Owl, in the distance. I glassed him to confirm it was him. He was very alert and was doing some preening. Based upon my experience with him when he’s that alert he doesn’t sit still very long. I watched him from a distance before he flew off. He went his way and I went mine, but if he was still in the area I thought there was a good chance Hoot, the female, was still in the area.

Eventually after a couple hours of searching I was searching the area near where I came across the dogs when I spotted Hoot sleeping in a tree. I could tell immediately it was her because of her larger size and her laid back behavior. I glassed up in the tree and saw some branches in the way.

Once I saw her I got my camera/lens out and took a couple shots. There was a very distracting branch across her body so I walked to get a slightly better angle to avoid that branch. I set up my tripod and took some more shots, while Hoot continued to sleep.


Once again I glassed her to see if I might be able to see if a could see a better angle to avoid any branches. Since I’ve been photographing her for almost 1 1/2 years I’ve come to know her behaviors. She would continue sleeping while I walked around. There is one other owl that would allow me to walk around like that and that’s Benny the Barred Owl. I grabbed my camera and walked to another  area that looked promising, but when I took the shot there was another small branch across her body.

While back at the tripod it was now a waiting game waiting for her to wake up. While watching her she briefly woke up and made a call. It was a territorial call without the typical body posture of the normal territorial call. I think its just a way for her to tell Give a Hoot her location. I got a photo of her calling, then turned on the video to capture two more calls. After the three calls it was time for her to go back to sleep.

Sometime during the one hour and forty-five minutes with her I saw what I would describe as a “burp”. Her chest quickly jerked, so I stayed ready at the camera because there was a good chance she would expel a pellet. It was several minutes later I saw her mouth open and she began looking forward and down. Nothing, her mouth now shut. Her neck elongated and again she began leaning forward with her head down and mouth open.  This time she expelled a small pellet. Now she was twisting her head while it was still lowered. She now was starting to expel the second larger pellet.

Once she was finished expelling the pellets it was time for some stretching. I recorded some territorial calls of her calling to Give a Hoot with him calling back to her. He was close by, but I couldn’t see him.

She flew off toward his direction. I packed up my gear and began walking out. Once out of the  woods I saw her perched in the distance on top of a tree surrounded by a large field. She was probably looking for a rabbit. Although, I’ve seen hawks sit in this tree before it was the first time seeing her there.

It was so dark out, but I couldn’t resist taking a shot. I grabbed my camera and sat on my backpack to keep my butt out of the snow and took some handheld shots of her sitting at the top of the tree hunting. 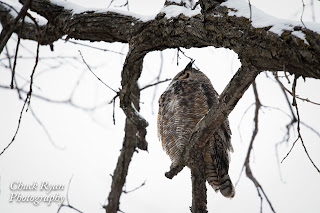 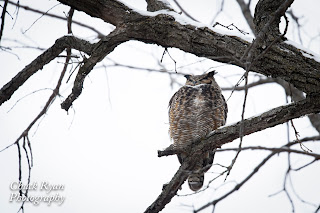 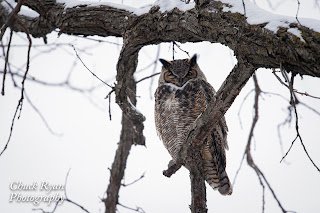 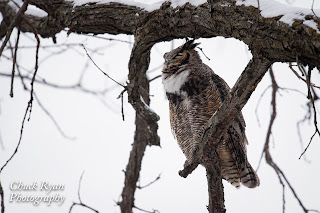 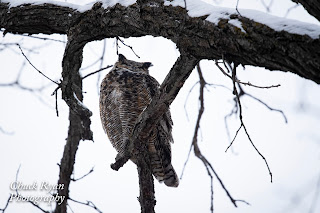 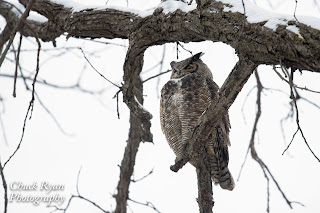 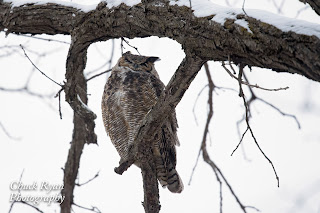 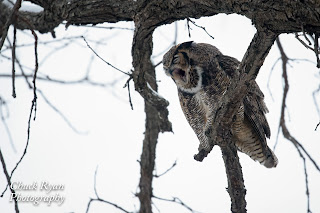 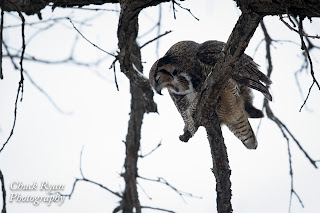 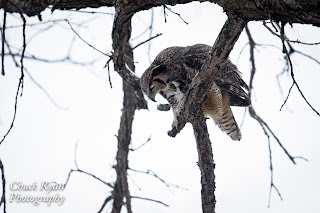 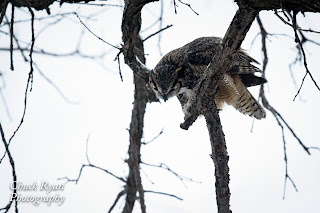 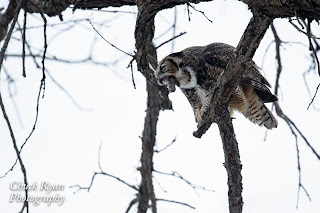 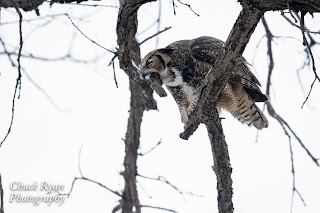 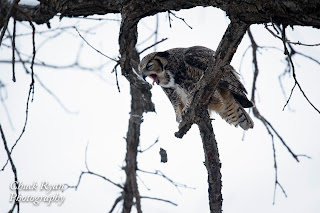 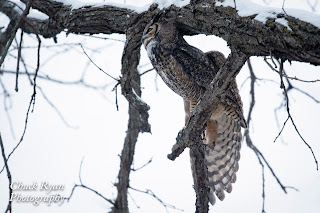 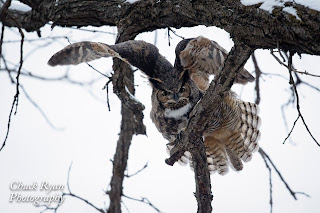 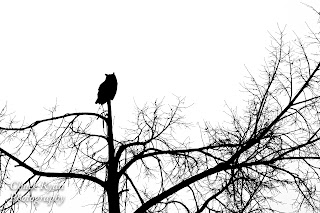