On Wednesday, 12-22-21, I was back out looking for the owls. It was just before 1400 hours when I spotted Hoot, the female Great Horned Owl, sitting up a tree out in the open. She had her eyes closed and she appeared to be sleeping.

About the same time I caught a glimpse of Give a Hoot off in the distance flying through the woods behind her. He wasn’t perched near Hoot when he took off. He must have had somewhere to go. He was either going to check out the world or maybe he was going to get an early start checking on some possible nest locations for Hoot to choose from when she’s ready to nest.

I knew it was probably going to be another few hours before she would fully wake up to start her day. While setting up my tripod and camera she turned her head away from me and stayed that way for awhile. She hasn’t been the least curious on what I’m doing, but again I’ve photographed her many times in the past and this is her typical behavior. Once I got everything set up it was now a matter of waiting and being ready to get the shot. My plan was to take more photos of her since she was sitting in a good location that didn’t have any unwanted branches across her head and most of her body.  I didn’t take much video of her over the next 3 hours that I was with her just when it got too dark for photos. Most of the video I got was of her doing some territorial calls, but there was a longer video clip of her vigorously cleaning her claws. I’ve included several territorial calls, but I also didn’t include them all.

Hoot continued to doze, but she would occasionally open her eyes. Early on after her eyes were shut for awhile I saw her left eye slowly open. I put my finger on the shutter button just in case she did something. She then vigorously shook her body for a couple seconds or so. I was prepared and captured this sequence and included a couple photos. I call it the “shake”. I’ve captured the “shake” in the past on video and I find it very interesting to watch.

Afterwards it was time for another nap.

Later on she became alert and was staring off in the distance. I looked in the direction she was looking and saw and eventually heard some sounds of someone walking away from me in the distance. It was about 10 minutes later when I saw this person approaching me with a dog. I wasn’t sure what Hoot would do, but I got ready for her to fly off. I motioned for him to go in another direction, he paused, but continued walking my way. I included one photo of Hoot elongating her body and bringing her feathers close to her body to make herself look smaller while watching them. Once that incident passed she was back to dozing with her feathers puffed back out. It wasn’t until about 1630 hours that she started some stretches and some preening. She also started calling to Give a Hoot with several territorial calls. I couldn’t hear Give a Hoot responding while out in the woods nor could I hear him responding on the video. He must have left the immediate area when the person with the dog was walking around. I’m very surprised on how many times Hoot was calling with no response from Give a Hoot.

When Hoot flew off at 1700 hours she only flew about 20 yards away and continued her calling. It was time for me to pack up my stuff and walk out. 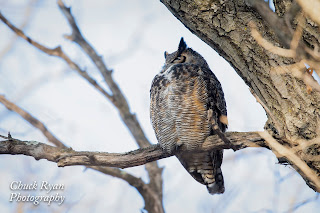 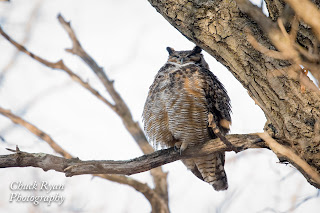 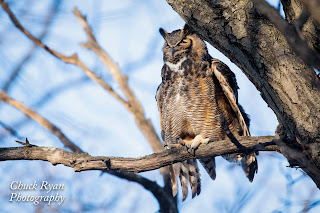 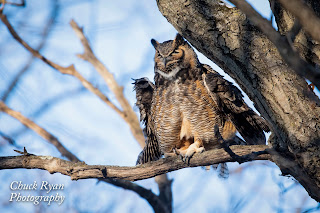 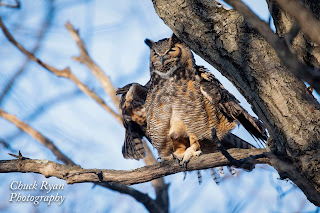 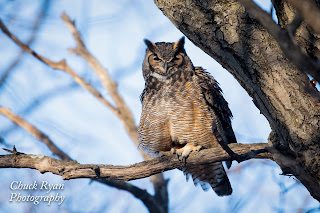 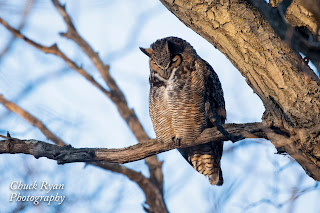 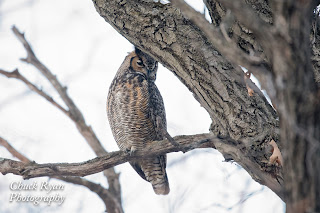 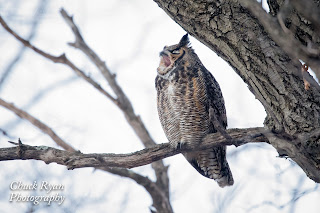 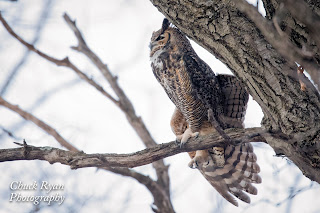 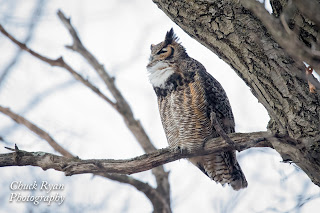 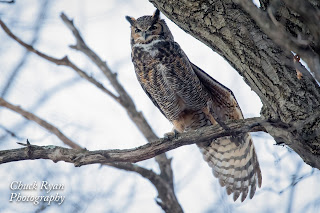