On Monday, 12-20-21, I found both Hoot, the female, and Give a Hoot, the male, Great Horned Owl perched in the same tree. I found them after about a half hour of walking at a distance of 40 to 45 yards. Hoot was the most visible when I found them. Give a Hoot was doing his best to hide and was very alert. Hoot was her laid back self snoozing.

I’ve seen Hoot perched on this same branch in the past. A few weeks ago on December 3rd before there was  snow on the ground while scouting the area I found lots of whitewash scattered in a large area on the ground below where they were both sitting. This explains why I was seeing so much whitewash and over a large area.

When I found the both of them I could see they both had some branches in front of them. I watched them for about 10 minutes watching their behaviors before I decided to set up my gear. I decided to get a couple shots before getting any closer to see if I could get a clear view of Hoot. There was no way to get a clear shot of Give a Hoot from any distance, in fact, as alert as he was I figured he would fly away.

While moving to my next vantage point about 15 yards closer, Give a Hoot, flew off just as expected. Hoot opened her eyes and slowly turned on the branch that she was on and looked in the direction where he just flew and she gave out two calls. I interpreted this as, “Hey Give (that’s what she calls him), where you going? It’s only Chuck!”. I wasn’t set up for these two calls. She then went back to dozing for the next couple hours before she woke up and starting do several more territorial calls.

Hoot was her typical self and slept most of my time with her.

Eventually, she flew off in the direction of Give a Hoot. I continued to listen and record them both calling back and forth in the distance.

I was with Hoot for about 2 1/2  hours until 1650 hours when she flew off toward Give a Hoot. It was a pretty cold day standing around watching her. 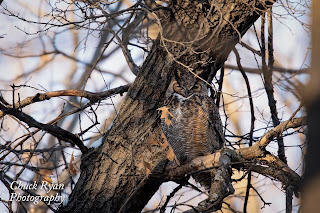 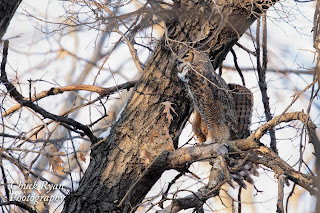 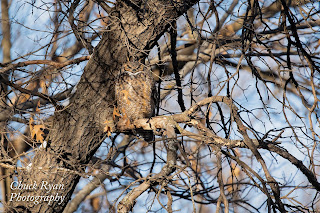