On, Tuesday, 11-30-21, I found “Hoot” after about an hour in the woods. When I first saw her at a distance I wasn’t sure if it was her or “Give a Hoot” the male. Right after I saw her and before I could get in position another GHO flew near her, but it continued flying further back in the woods. When I heard “Hoot’ give several territorial calls a couple hours later I then knew it had to be “Give a Hoot” who flew by us.

I spent the next 2 1/2 hours with her. The first half hour the sun was out and casting some nasty shadows upon her body from the several branches in front of her. I moved four different times to avoid most of the branches in front of her head and body, except for one across the upper part of her body. This would be the best view I would get today.

When I first found her she was alert, but she didn’t seemed to be bothered by my presence since she avoided eye contact with me. :)  It wasn’t long before she decided to take a nap only opening one or the other eye occasionally, until it was time to fully wake up and start his day.

While watching “Hoot’ I was distracted several times by several deer around me. There were at least eight with two of them being pretty good size bucks. While I was listening I heard some clicking/rattling noises and eventually saw the two bucks sparing with one another. If I had a better view I may have considered taking a video of them. It sounded more like they were only playing with one another. They were just “tickling” each others antlers. Shortly they ended up with a group of four other does that were about thirty yards from me. I took some cell phone video of both bucks walking to the does, but it was hard to see them walking through the trees.

The light was disappearing in the woods so I concentrated on just taking video of Hoot. I had the video going when “Hoot” woke up and did two squawk calls followed up with some territorial calls. The geese and swans were making a lot of noise, but when I reviewed the video “ Give a Hoot” called back to her. When the geese settled down I could hear “Give a Hoot” calling in the distance. They called back and forth a few times before “Hoot” flew off in his direction. I’ve got her doing some grooming and some stretches, also.

I walked over to Hoot after she flew closer to Give a Hoot, the male, but her back was facing to me so I packed up my gear and went home.

When I find either one of these owls I usually spend a few hours with them watching their behaviors. I’ve photographed these two many times over the past year well as their two owlets last winter.

****I've updated this narrative to show this is Hoot, the female Great Horned Owl. *** 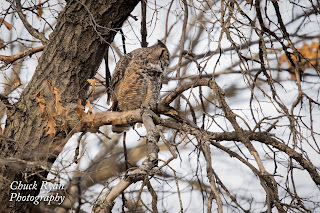 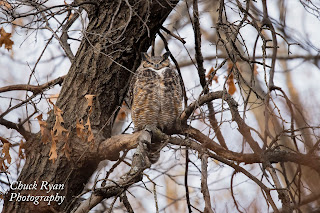 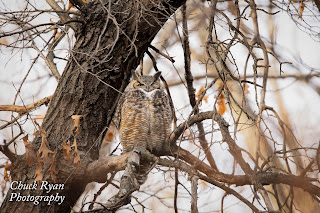 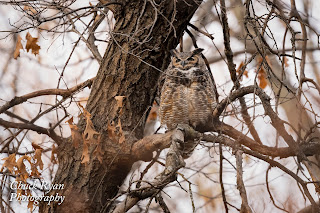 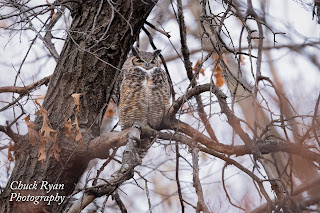