On Friday, 01-28-22, I took a friend, Kathryn, out to the woods to see if we could find Hoot. She’s an avid owl lover and has been sworn to secrecy about the location and has gone through the necessary background checks. :)

While walking to the area I spotted Give a Hoot high up in a tree who was still some distance away from us. I pointed out Give a Hoot, but if you’re not used to seeing an owl in the wild it may take a little time to see it.

We stood there watching him for a few minutes. I visually checked around for Hoot, but I didn’t see her.

We continued walking while scanning the area for Hoot. We were now coming around to the backside of the tree, when I saw just a small portion of the tail of what appeared to be Hoot.  We couldn’t see her when we first spotted Give a Hoot or while we were walking until we got pretty close to the opposite side of the tree. We took a few more steps and now I could see both owls.

We were too close to the tree to get any good photographs because they were up so high and we were also behind them. Hoot doesn’t normally look behind her just for me to photograph her. If I want to photograph her I have to get to the front of her.  The reason we ended up on the opposite side of the tree was we were going to walk past Give a Hoot looking for Hoot further back in the woods. Give a Hoot is always camera shy, so its unlikely he would stick around for me to set-up anyways.

Give a Hoot flew from his perch a short distance away.  I walked his general direction, since he went the direction I needed  to go to photograph Hoot from the front. Kathryn stayed with Hoot, because Hoot would stay where she was and wouldn’t fly away so this would give Kathryn more time watching her.

l almost got a photo of Give a Hoot, but he had to leave before I was all set up. I was close to getting a shot, but that’s what usually happens when I try to photograph him. I’m beginning to think he can recognize my camera. I can get everything all set up, but when I grab my camera he needs to suddenly leave.

Since I was to the front of Hoot, Kathryn walked in a wide arc over to me. Today was a little more challenging finding a good spot to photograph, because of the many branches in the way.

While we watched Hoot sleeping some crows flew overhead and they were talking to each other. Hoot woke up and made a contact Hoot. This has happened several times in the past that she’ll make a contact hoot, similar to the territorial call, while the crows are around. I’m not sure why the crows don’t circle back and mob her. They seem to just ignore this call from her.

Kathryn left after about an hour while I stayed with Hoot who was sleeping. Fifteen to twenty minutes later Hoot woke up and was very alert. Hoot made several different calls including some conversational chitters while Give a Hoot can be heard returning some of her calls. I had the video running while they were calling back and forth. I put together this video with some subtitles of the different calls Hoot is making.


When I was photographing her on the 26th she left that perch and flew to a large snag closer to me. There are several small branches that are in the way of a good photograph so I was going to walk around a little to look for a possible place to put my tripod in case she flew there again. Then I thought how likely would  it be for her to fly there again, because the snag is no more than 10 yards away and she’s not that high off the ground so I stopped looking.

Well, when she was ready to get closer to Give a Hoot she flew to this same snag. I scrambled to move my tripod, but with her not being very high up I had to lower the front of my lens which raised the back of my camera. Now I couldn’t see through my viewfinder very well. I was standing on my toes trying to see her and photograph her at the same time. She didn’t stay there as long as she did a couple days earlier.

She then flew off toward Give a Hoot. 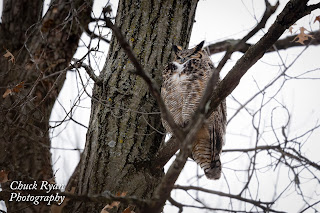 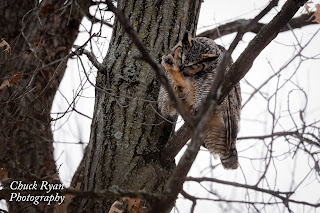 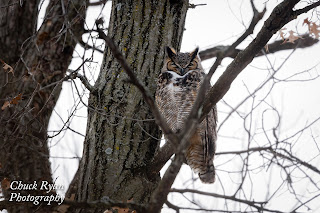 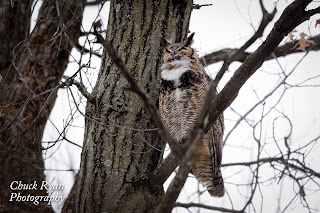 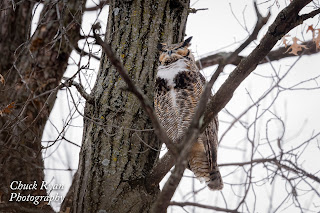 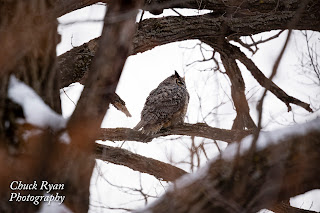 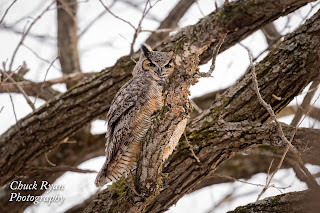 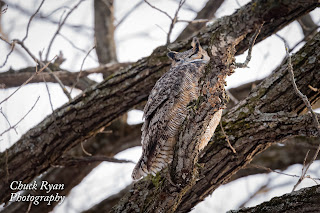 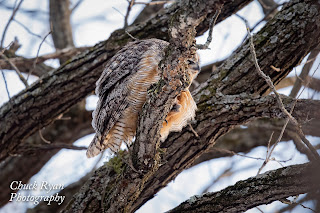 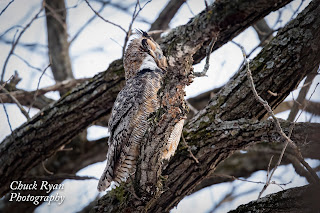 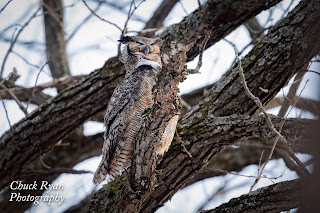 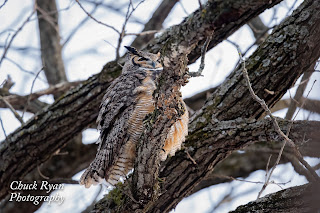 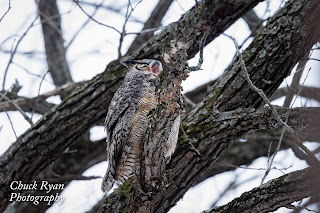 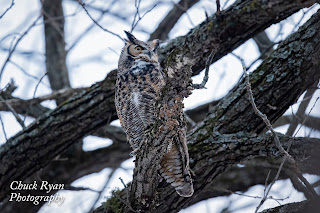 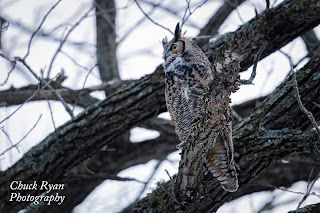 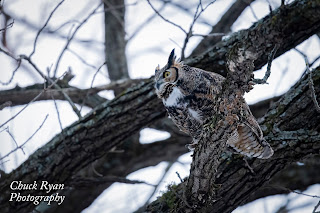 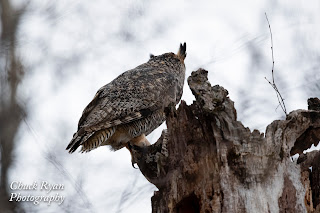