On Monday, 01-03-22, I was out again looking for some owls. My plan was if I didn’t find either Hoot or Give a Hoot that I would search another area for Benny the Barred Owl.

It wasn’t too long once I reached Hoot’s main territory before I spotted what I thought were both owls high up in a large oak tree. I could see one owl for sure, but there appeared to be two white patches from two owls. I was still some distance away so I glassed them to be sure it was the both of them. Sure enough there were Hoot and Give a Hoot snuggled up next to each other on the same branch with Hoot up tight against the tree. Where I was standing I had to move slightly to get a better view of Hoot.

Once I found them I just watch for about 10 minutes since there wasn’t any reason to set up my tripod yet. I was still too far away and there were too many branches in front of their bodies. They were both alert and they were looking my direction some of the time. Any attempt to get any closer so soon was probably going to have Give a Hoot flying off before I could find a decent angle to photograph them.The sun was out and it was casting some unwanted shadows on their bodies from where I was standing.

While I watched them I heard a slight noise near me. I looked over and saw a doe slowly walking before she stopped a few yards away. I slowly walked closer to her and took an iPhone picture. There were three does in the is group. They slowly walked off, so back to watching the owls.

Both owls were at least 25 yards up the tree. There was lots of taller underbrush and downed branches that made it impossible to just walk to a spot and start photographing them.
After 10 minutes I just started walking when I saw Hoot jump to another branch and begin calling. If I heard her correctly she said, Chuck, over here!

I made a wide arc around them while taking some handheld shots. I was surprised that Give a Hoot didn’t fly off right away. I took some shots of Hoot, but there were some distracting branches in front of her. I kept walking in a wide semi-circle to get on the backside of the tree, so I could photograph Give a Hoot. There he was looking down at me with his big yellow eyes. I got one decent shot before backtracking back to Hoot who was already back to sleep.

Give a Hoot flew off before I was able to set up any gear, but now with only Hoot around I don’t have to be too concerned if I made a little more noise. I kept visually looking around to figure out where I could place my tripod. Eventually,  I walked back to where I first saw them and made my way through the underbrush that crossed a small trail. I found a spot without any branches between me and her, but it certainly wasn’t where I really wanted to be. I was closer to the tree than I wanted and she was up high so this made for a very awkward angle for the shots.

She continued to sleep while I was in the process of setting up. Once I was set up I watched her wake up briefly a few times to do some preening, stretching and some calls, then shut her eyes for more snoozing. One of the times while she was preening one of her legs there was a tree that made a very loud crack from the sun warming it up after all the below zero weather we’ve had the last few days. Her head was down when the loud pop happened and her head quickly snapped up looking in the direction of the sound. After a couple seconds she realized there was no danger and back to preening. If you look closely in some of the photos you can see some dried blood on her right foot and most likely some rabbit fur on her left foot.

Also, while Hoot appeared to be sleeping I caught a glimpse of Give a Hoot who had made a complete circle around me and landed maybe 30 yards away. I couldn’t see him, but just the general area. When I looked back up to Hoot after he had landed she was already looking in his direction. She made to call to him. I’m always amazed at the hearing these owls have.

After about a half hour later Hoot started doing some more stretches before turning her head quickly in one direction and listening intently. Soon she turned around and flew off.

It took me a couple minutes to get all my gear to the small trail where I started packing up all my gear. Suddenly, I heard a sound, looked over, and saw an electric fat bike coming toward me from the direction Hoot was looking so intently before flying off.  That would explain the reason she flew off so quickly. There aren’t any bike trails in this area, but having an electric fat bike in this snow sure makes it much easier to get around in the deeper snow. The only thing he said as he passed was, “seeing any deer”. I don’t need to put down what I was saying to myself. 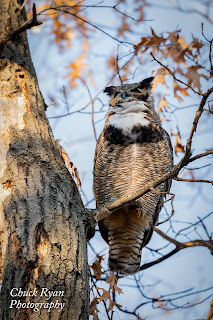 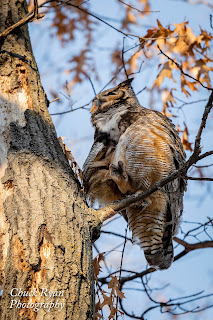 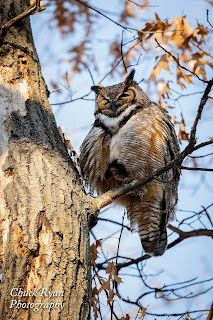 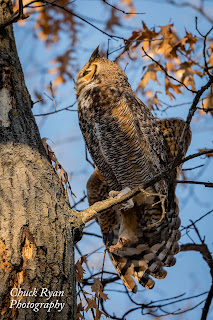 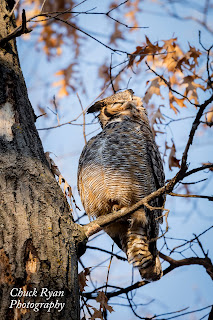 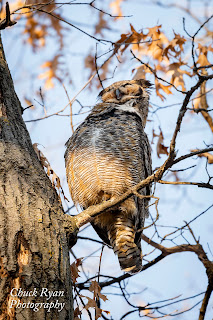 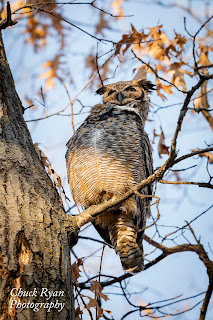 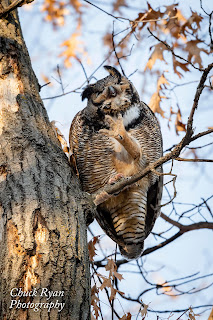 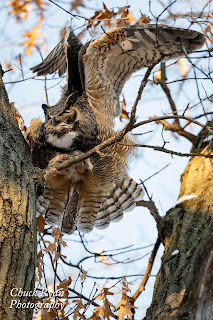