On Wednesday, 01-19-22, I was going back into the woods looking for either the Great Horned Owls or the Barred Owl. It was another cold day. The temperature was around 5 degrees F when I went out, but there was a very brisk NW wind making it around -15 F windchill. I got some new five finger gloves, so today would be an excellent day to try them out.

It took me about a half hour of walking before I saw Hoot, the female Great Horned Owl, perched in what must be one of her favorite trees, because this was the 6th time finding her there. I was still over 40 yards away and I hadn’t come across Give a Hoot, the male, yet.

I know that I wouldn’t get the photos of Hoot that I would like, because there are a few small distracting branches around her face area that get in the way especially when she moves around like when she does her stretches and doing any territorial calls.

Since it was only about 1400 hrs I decided to not get any closer and go look for Benny the Barred Owl, because Hoot wouldn’t start to get active for another 2 1/2 hours other than some territorial calls before falling back to sleep. If I didn’t find Benny the Barred Owl, then I would come back to see if I could find Give a Hoot perched somewhere close to Hoot. Maybe even get a photo of him.

I walked the general area where Benny the Barred he hangs out, but I didn’t find him. There were 5 small deer that watched me while I walked around his area. Obviously, it was their area, too. One of these deer has some deformed ears as if someone cut off the top two thirds of the ear off. I have photographed this doe several times in the past two years.

It was only about an hour before I was back where I originally spotted Hoot perched on the same branch in the distance. Now I scanned the area as I slowly walked toward her looking for Give a Hoot, but I didn’t find him. When I got close enough to Hoot I checked with my binoculars for the small branches near her head to see if there was another possible location to photograph her other than where I have set up in the past. The other problem was the other small trees and branches that are in the way to set up my tripod.

Knowing that I wouldn’t come away with the photos I would really like to get I stood watching her for several minutes deciding if I should stay or go. It was around 1500 hrs, so it was still going to be a long cold wait before she became active.

Since Hoot allows me to walk around I found another spot where I could set up my tripod which I did, but I still have the same problem of the small branches near her head. I decided not to shoot any video because of the cold wearing my new gloves having to fumble around with the buttons going between video and still photographs.

While watching Hoot she woke up several times in the 1 1/2 hours I was with her to do some territorial  calls. It was 1612 hrs when I finally looked at my watch wondering how long I had been with her. Shortly after checking the time Hoot did another call, and I heard Give a Hoot respond. He was very close, but I couldn’t see him. They continued to call back and forth. While watching Hoot I also saw her upper body move like what happens when she does the conversational chitters. She was talking to Give a Hoot, but these closed mouth calls are very soft and I certainly can’t hear them in the woods. It also looked like she did at least one clucky chitter or it could have been a soft staccato hoot that’s similar to a clucky chitter. This certainly would have been a good day to have the video running.

Hoot did some stretches before walking a few feet from her perch further out on the branch. There was a tree in my way and I wasn’t able to move my tripod quick enough before she flew off 10 yards to another perch to begin her day looking for a rabbit. The b & w image is her just after she began hunting.
While I packed my gear with my very cold hands and walking out Hoot still had her back to me.

Here are my images of Hoot and the branches :) 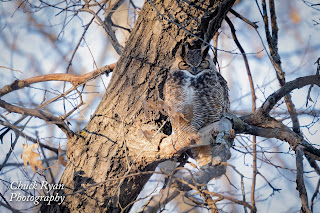 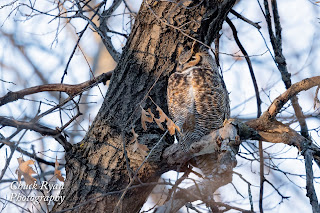 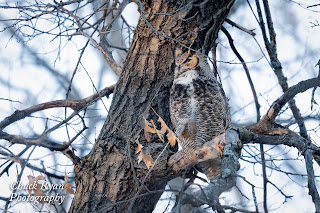 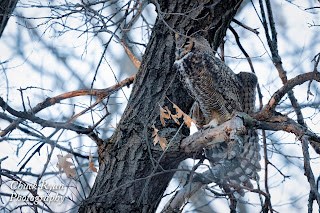 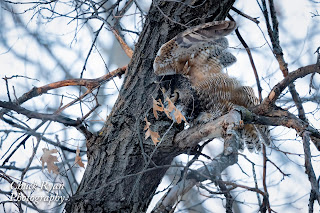 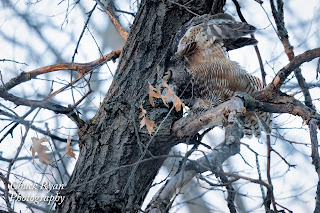 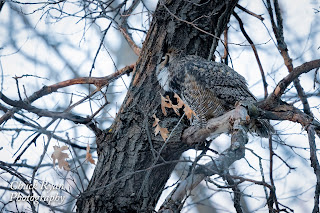 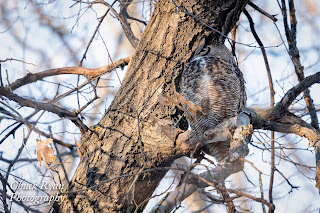 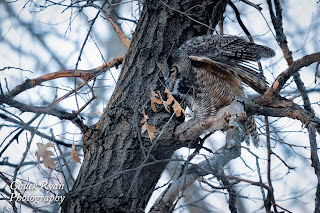 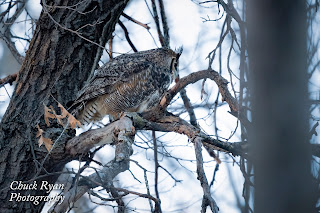 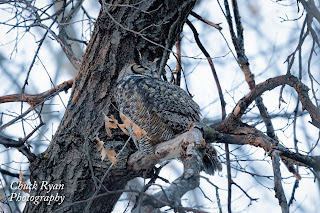 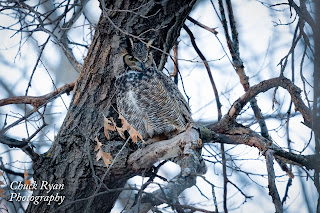 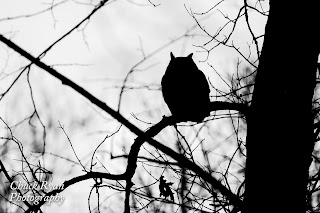