On Monday, 01-17-22, I went back out to see if I could locate any owls. It was a relatively warm day with the temperature around freezing with little to no wind.

I saw Hoot, the female, Great Horned Owl in her territory. She was perched in the same spot on a branch for the fifth time this season.  Where she was perched I knew I only have a very small widow to photograph her without having any branches directly in her face, but there are still other distracting branches.

While walking her way I saw Give a Hoot, the male, in another tree close by Hoot. If I could get a good shot of him I would set up my tripod otherwise I wouldn’t need to photograph Hoot where she was perched. I continued to walk where I found a spot where I had a pretty good opportunity to photograph him. I began setting up my tripod when he turned around on the branch. Although I was able to get an uninteresting photograph of his back side with some branches before he flew off. While I was setting up my tripod Hoot gave a territorial call.

Since I had the tripod out I took a couple shots of Hoot when I heard someone in the woods near me. I took  my camera off my tripod and started walking away from Hoot back to my backpack. It was a couple with their dog and they were walking close to Hoot causing her to fly from her perch toward my general direction. It didn’t appear they saw her fly off which certainly surprised me. Once the couple got close to me their dog began barking at me. This time Hoot stayed put, but I had to wait for them to leave the area.

Hoot had her back to me so I waited several minutes before getting in position. While taking some photos two crows above spotted her and they began calling and circling. Hoot was watching them intently as they circled above, so I got some photos of her looking upward. Shortly after the crows left Hoot flew to a nearby tree where she had more cover.

I packed up my equipment and went looking for Benny the Barred Owl.  I walked around in his area, but I was unable to find him. While looking I saw seven deer that must had made the beds I seen two days earlier near where I found Benny. I wasn’t able to get any photos of them , since I didn’t have my camera out. While watching the deer I heard Hoot do two territorial calls. Since I was only around fifty yards away I walked back to her. She was still perched in the same tree when I left her earlier and she was back to sleeping. I watched her for a few minutes before calling it a day. 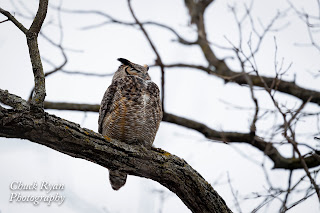 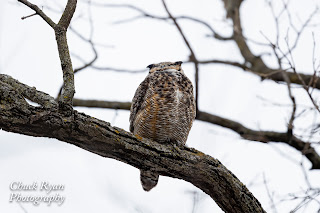 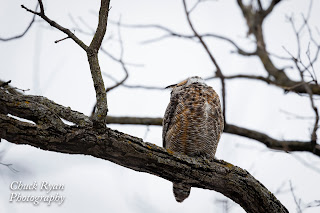 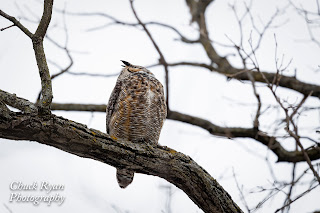 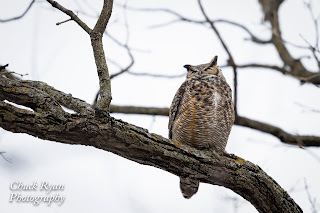 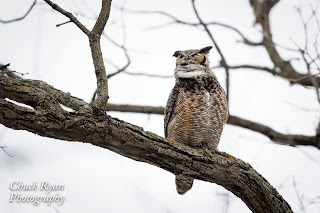 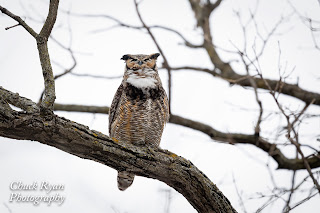 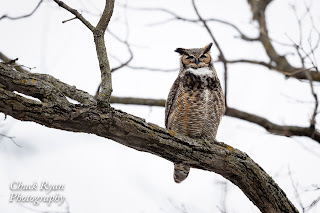 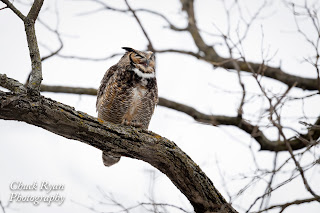 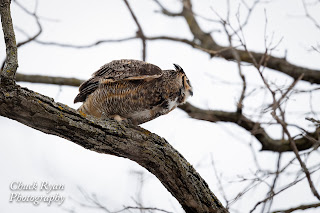