On, Thursday, 02-03-22, I went back out to the woods to look for the Great Horned Owls. Hoot, the female, should be really close to be nesting. It looks like she has picked out the top of a large snag for this years nest.

It was another very cold day with the temperature around 5 degrees F, but with a much lighter wind than the day before. Although, after spending over 3 1/2 hours with her, while mostly stationary, my whole body was extremely cold especially my hands.

It didn’t take me long to find her once I got to her area. She was sitting up high in a tree sunning herself. Maybe it would be more appropriate to say the sunlight was shining in her face, because there wasn’t any heat coming from the sunlight.

I walked to the front of her, but couldn’t find a good place to set up my tripod. I ended up putting down my backpack and walking all around in front of her. Only one time did see look down me and it appeared she just winked, then went back to sleep. There just wasn’t a good window to get any decent photographs without a bunch of branches in the way. I got back to my backpack and was walking away to go look for Benny the Barred Owl, when I saw a fairly decent window to shoot through. Since I spend a lot of time with her, observing her different behaviors, it’s also nice to get some decent photographs while observing.

The other problem was with the bright sunlight there were a couple distracting shadows across her body from some of the branches. I included a couple photographs with the shadows on her body, but I deleted most of the photographs when I got home. The better light was after the sun started getting lower in the sky causing the shadows to rise up over her head. The video early on will show the shadows a little better. It wasn’t until a couple hours later when the shadows disappeared.

Hoot was sleeping when I found her. It took her a while before she did a couple contact hoots, but as the day went on she did many of them. She really started calling around 1715 hrs at about the time she recently has been leaving her perch then flying to the possible nest.

I could hear Give a Hoot, the male, return a couple of her calls. It wasn’t until I listened to the video clips that I heard him do some conversational chitters. I put some subtitles in the video when he was calling. Although, I couldn’t hear them while I was in the woods he had to be very close. These calls are a softer closed mouth calls with the body moving slightly in a jerky motion.

Shortly before 1730 hrs I caught some movement out the corner of my right eye that I thought was Give a Hoot, but it was an eagle instead. It flew right over me about 20 yards up. In the video Hoot is seen tracking its movements as it flew by.

Then around 1740 hrs out the corner of my left eye I actually saw Give a Hoot flying near me. When I saw him I  initially thought he flew from the snag/nest, but after thinking about it he must have flew from one of the trees that was also to my left , but slightly behind me. I didn’t see or hear him come in, but he certainly wasn’t there when I was walking around earlier.

I had the video going when Hoot was looking in Give a Hoot’s directions as he flew off. You can hear his wings hitting some of the branches as he flew. It didn’t take her long to join him. She flew his direction and you can hear them calling to each other. I turned the camera around in their direction hoping I could focus on them quickly while recording, but couldn’t. I turned off the video to focus on her through my view finder. Just as I got her in focus I saw Give a Hoot jump on her back, then he immediately flew off to her left about 10 yards. I wasn’t quick enough to start the recording until after he got off her back. My fine motor skills were gone at this point and my thick gloves with numb fingers were causing a slight delay in my “rapid response time”. :)

While I was watching Give a Hoot a couple feet from the camera Hoot flew off so that ended my day in the woods with those two crazy “lovebirds”. 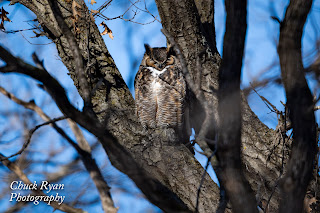 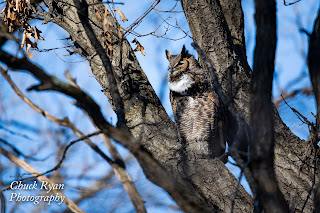 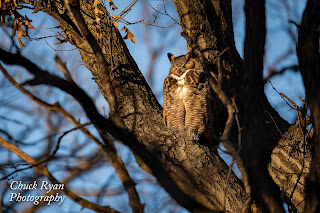 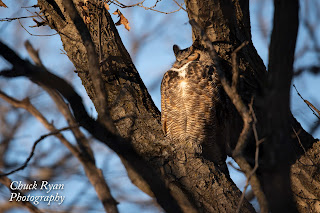 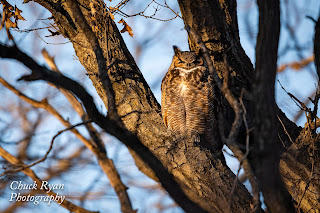 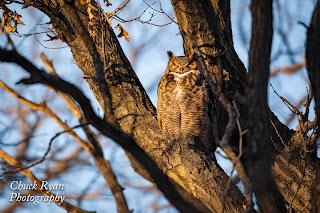 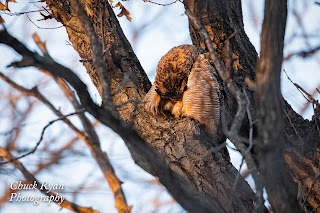 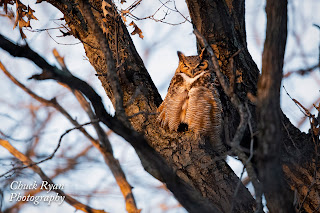 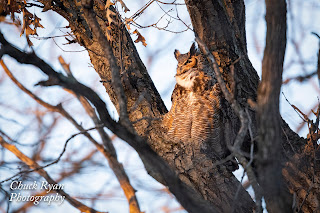 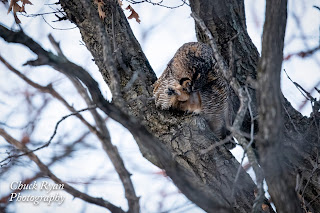 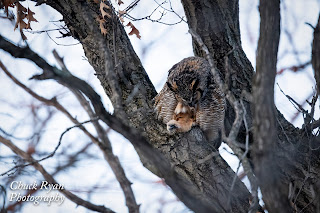 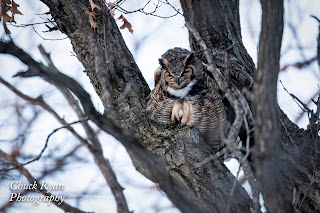 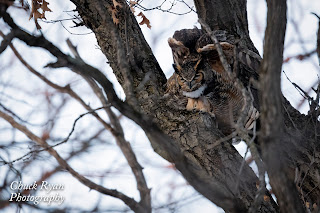 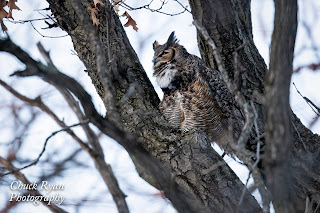