Hoot said, “Give, (her nickname for him) where’s the rest of the rabbit!

The temperature was 2 degrees F when I went out and it never warmed up while I was out there with them. Most of the time my hands get the coldest and today was no different.

She watched me while I set up my tripod and camera. I took a photo of her while waiting and listening for GAH who I know will show up. I’m not exactly sure how long it was before GAH could be heard in the distance making some contact hoots, but it was within 15 to 30 minutes. Contact hoots sound like a territorial call, but without the forward leaning posture. Since I couldn’t see him most of the time when he was calling in the distance some of the contact hoots could certainly be a territorial call.

After a few contact calls from GAH I saw him flying closer to the nest. I lost track of exactly where he landed because of all the trees. I thought it was around 30 yards away, so I was looking too far away to notice him only 15 yards from the nest. He didn’t stay long, before he flew to his next perch closer to me. Again, there were some trees blocking him. I decided to see if I could get a video on him, but he flew to his next perch. I was able to get the camera on him with his back to me. I figured he was hunting looking for a rabbit for Hoot. Once again GAH flew off and I couldn’t see him any longer.

I put the camera back on Hoot, while I kept looking behind me for GAH. He’s been know to circle around me and land above me without me knowing.

I put a lot of subtitles in the video describing the different calls that both Hoot and GAH were doing throughout the video. GAH makes many contact hoots/territorial calls. I also narrated some of what was going on in the woods.

It was 1715 hrs when Hoot raised up off the egg(s), lowered her head in the nest to rearranged the egg(s) before settling back down with a side by side motion on top of the eggs in her brood patch. She’’ll have the egg(s) next to her bare skin with her feathers surrounding them to keep them warm. She’s now in a slightly different position on the nest, so her head is out of sight. That is until she heard a deer crashing through the snow nearby. She looked at me looking to see if I made the noise. The deer was behind her so she couldn’t see it. Shortly, Hoot heard the deer snort, but this time she looked in the direction of the sound knowing I didn’t make it.

GAH made several contact calls from 8:44 to 11:00 minutes in the video. I shortened the duration in between those calls, but at the 11:00 minute mark I left the video running so you’ll see Hoot’s behaviors and hear all the calls as they were happening in real time.

GAH flew to the nest at 16:23 in the video. He brought Hoot the rest of his meal which was one rabbit leg. I’m not sure if she was all that happy about it. She started doing another type chitter call. GAH makes a few more contact calls before they both stand up on the rim of the snag and fly off in different directions.

I quickly packed up my gear and left the area.

If you’ve been following my adventures with these two for the past 1 1/2 years and have watched my other videos of Hoot nesting last year it’s fairly common for her to leave the nest for a short period of time.

Last year when I lost track of her whereabouts in January/early February I found her perched in a tree. I thought she had already started nesting, but it wasn’t until shortly afterwards that I saw her that she actually started nesting.

I was wondering at that time how long a Great Horned Owl could be off the nest at one time. This is what I found… “ Females can incubate eggs in temperatures as low as -35 Degrees F ( -31 C) and eggs have been known to survive at -25 F (-31 C) for up to 20 minutes while the female takes a break from incubation duties!”. The temperature was around 2 degrees F. 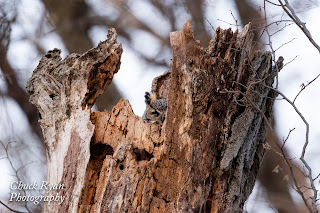 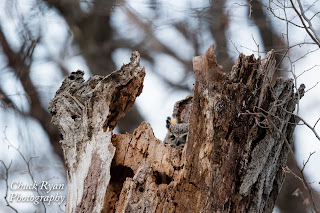