On Tuesday, 02-22-22, I went out and spent several hours with Hoot on the nest and Give a Hoot, the male. The first picture that I took once I got out there was with her tail feathers. We got several inches of snow during the day, so when she moved the first time while I was out there she had snow on her back. Give a Hoot was perched nearby.

About an hour later he flew off to go hunting. I saw the general  direction he flew and landed. He was there for awhile before I saw him fly again. This time it looked like he flapped his wings several times before dropping lower toward the ground out of my sight.  A very short time time later I saw him fly back up to another tree. The next time I saw him was when he flew to the nest  to check in with Hoot. I don’t believe he brought any food to the nest this time.

Hoot didn’t move around much on the nest. She adjusted herself slightly a couple time over the eggs. It was very cold out with very strong winds with a light snow while I was with them. The other picture of Hoot was after Give a Hoot had visited the nest. I removed my teleconverter after he left the nest hoping he would come back. I left the area around 1800 hrs and he hadn’t returned yet.

Early on I heard Give a Hoot make some contact hoots when he was perched nearby, but once he flew further away I couldn’t hear any because of the strong winds. I haven’t listen to the audio on the video clips to hear if the microphone picked up any more of his calls, other than the calls he made and the chitter call Hoot made when he stopped by the nest. 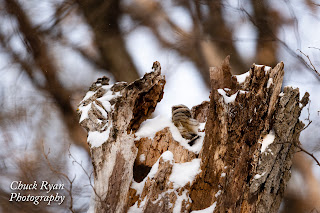 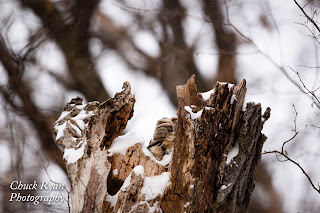 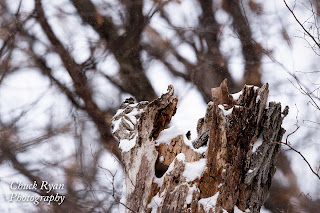