On Sunday, 03-28-21, I was in the area of Hoot’s nest at 1130 hrs. I could see from a distance Hoot on the nest feeding the two owlets. I was planning to come back later in the afternoon.

While walking back out to her area at about 1630 hrs I heard the familiar sounds of several crows in the area of her nest. When I got to the nest I could only see one of the owlets in the nest. The crows were another 30 yards away. I looked with my binoculars and could see Hoot being mobbed by several crows.

I began setting up my gear. Once I was done I glassed the area where I last saw Hoot, but I didn’t see her anymore. She didn’t go far because the crows were still making lots of noise in the same general area.

There were so many branches in front of the nest that the owlets were very hard to capture in photographs, so I took mostly video and just observed.

Hoot came back to the area of the nest at 1753 hrs, then after 5 to 10 minutes landed on the nest. It was feeding time for the little ones. Once again it was rabbit on the menu.

Hoot feed the owlets for about 30 minutes before flying off. This time she flew further away although I didn’t see her land. I stayed at the nest for the next hour until sunset at 1930 hrs. The owlets dosed for awhile after eating, then it was grooming time.

I spent 3 hours at the nest, until sunset. 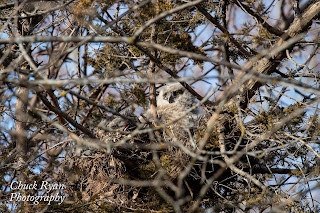