Earlier on, Sunday, 03-21-21,  I went to check on Hoot, the female Great Horned Owl, without taking my camera. I was planning to sit out with her later in the afternoon, but with the high winds she had her tail into the wind. A few hours later I went back out with my camera and took a couple photos and immediately left. The way she was positioned in the nest with the high winds I wouldn't be able to see/photograph the owlets.

After being a home awhile,  I decided to go out a little further away from the nest about an hour before sunset and set up my recorder to record any territorial calls by either Hoot or Give a Hoot, the male Great Horned Owl. When I got out there around 1830 hrs. it was already pretty dark with some rain clouds moving in. Shortly after I got in the area there was a brief, light sprinkle of rain.

I glassed the nest from a distance and I couldn’t see Hoot. I maneuvered slightly to get a better view through the branches, but she wasn’t there. While looking at the nest I caught the glimpse of some white. I made my way over where I’ve been setting up to photograph her on the nest, but now I couldn’t see any white.  I continued to glass the nest and eventually the top of a little white head popped up above the rim of the nest.

After setting up my camera/tripod I was able get some video and some photos. There are a couple owlets in the nest. One of them has their eyes partially open and the other one still has its eyes closed. I wasn’t able able to hear any calling by either Hoot or Give a Hoot, if any calling took place, because the strong wind was blowing away from the nest.

While photographing the owlets I saw one of the adult Great Horned Owls, flying toward the nest. I thought at first it was the male, but after viewing the video it appears it was Hoot coming back to check on her owlets. I wasn’t able to focus on her with my long lens after locating her as she didn’t stick too long. She flew off to continuing hunting. I left before she came back to the nest for the evening.

Here is the image of Hoot earlier on Sunday. 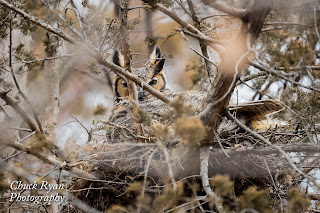