Since I found “Hoot” the female Great Horned Owl yesterday after 39 days I went back to the general area on snowshoes today. The area wasn’t the typical oak and maple trees where I would expect to find an owl, but there were a few conifers.

I glassed a few conifers, then one spruce tree in the distance caught my attention. I put my binoculars to my eyes and saw “Hoot” hiding behind some spruce needles and branches. I got out my camera, long lens and tripod from my backpack and took a couple shots.

Now I know for certain that’s she’s not sitting on any nest right now. Will she be soon…I have no idea. The female won’t nest every year.

Now that I know her new area I’ll have to go back later on and find her again, then sit and watch her from a distance to see what she does after she wakes up. I’m not planning to do it tonight although I may change my mind.

Her right eye is closed so I’m sure she has been roosting there since early this morning. I found her shortly after 1200 hrs.

I cropped this image a little but I was a fairly good distance from her. I was using my 500mm lens with my 1.4x teleconverter, so a 700mm shot. 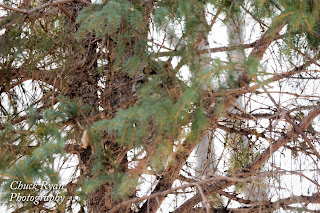