This afternoon I went out walking around the woods for 3 hours looking for the owls. These two images are of the male Great Horned Owl, who I call “Give a Hoot”.
He was hiding in this tree where I’ve spotted him a few times in the past. Today I started looking at the tree while I was further away from it, since it was a week ago he flew from this same tree. I noticed that there seemed to be a bulge along one of the branches, so i glassed the tree and saw “Give a Hoot” backed right up next to the larger branch to its left. The way the branch attaches to the tree that he’s perched on I could only see about half his body.
I usually don’t get a chance to see him from a distance like today. Normally he’s off flying as soon as he thinks I’ve spotted him. I was lucky today since I was able to set up my tripod and attach my lens/camera. Although, once I got it set up he moved away from the larger branch, pooped, then flew off.
I checked a few more areas for two different Barred Owls and the female GHO, but I didn’t find them.
During my walks I’ve been keeping an eye on an aspen tree that has some Pileated Woodpecker holes. I figure there was something living in the round hole because of the recent activity surrounding the hole. While walking toward the tree it looked like something was in the hole. I got out my binoculars and saw it was a squirrel. All I could see was about half of its head that was resting on both of his front feet while it was watching me. By the time I got set up to take a picture it must have other things to do. I waited for awhile to see if he would stick his head out again, but he never did. 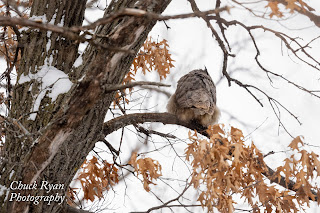 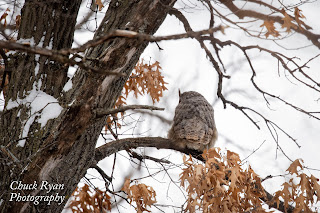 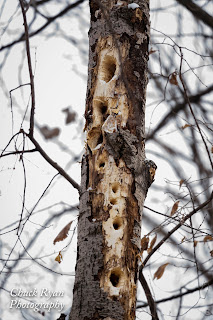 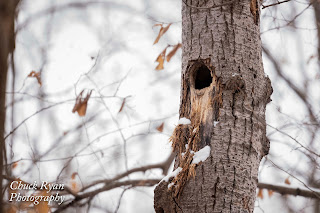