...at the Medina Ballroom on Saturday night, 10-16-10. Opening for the Hoopsnakes was Reverend Raven and the Chain Smokin’ Alter Boys.

The Reverend always puts on a good show. Tonight was no different. He got the crowd moving. I bought my ticket about a month ago so I got a reserved seat, although it wasn’t at one of the tables directly in front of the stage.

If you’ve ever been at the Medina Ballroom for a performance you know what I’m talking about. The tables are perpendicular to the stage and they start right at the stage. There’s no walking from one side of the stage to the other.

I was lucky to be able to move to one of those tables just before the Reverend began playing so I was able to be fairly close. 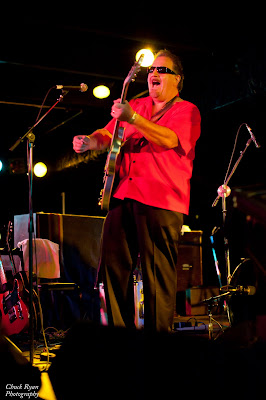 Just before the Reverend finished their last song several people came and claimed their seat. I moved off to the side of the stage.

I went and got my CD’s from the Rev and talked with the guys in the band. Tonight was the first night to see how Jen Taylor processed my original photos that were used for their new CD, Shake Your Boogie”. I’ll tried and take of few photos of the front, inside and back of their new CD later to post. The originakl photo of the Rev used on the front of the CD and their poster was taken this year at the Bayfront Blues Festival. The other photos were taken at the old Wilebski’s Blues Saloon.

I highly recommend picking up the Rev’s new CD.

I made my way back to the far side of the stage where I would begin watching the Hoopsnakes. There was a large, packed crowd so I wouldn’t be able to get too close to the band or walk around. Therefore I don’t have any close-up shots.

I eventually made my way to the opposite end of the stage close to where Bruce McCabe was playing. I stayed there the remainder of the show.

The Hoopsnakes put on a great show, also. 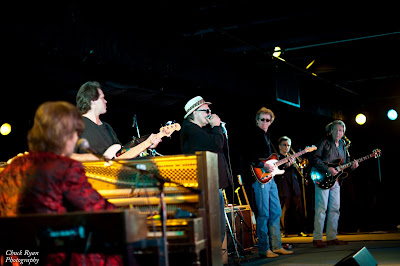