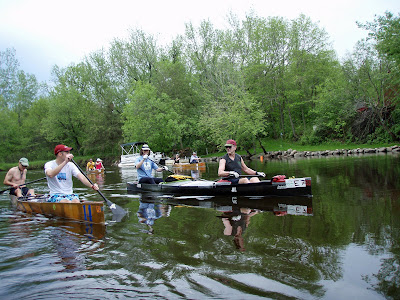 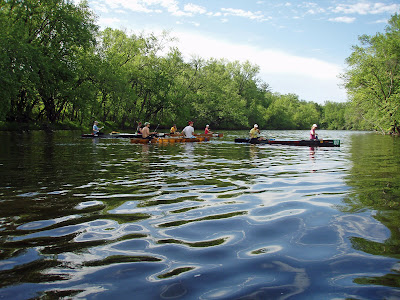 Only Saturday and Sunday off this week-end and it sure went by fast. Especially, when I’m having fun and I did have fun. This week-end it was all about physical activity.

Saturday, 06-07-08, I paddled with Ed. There were several other people paddling, also. The meeting time was 07:00am. I’m a morning person and I prefer to get out early. Before I stopped racing this was a normal time to get out and paddle during the summer. Now it has been 0900 am or 0930 am.

Ed Arenz was going to paddle with Devin Arenz Sunday morning, so I asked if anyone in the group if they wanted to paddle with me on Sunday. Julie Boehrer spoke up and said she would, but then she said she was going to take all of next week off. Julie had hurt her shoulder a few weeks back. I paddled with Julie at the Jensen Handicap and she was in the bow. Her shoulder really was hurting during the race and it hurts more so when she is in the bow. She said she would need to paddle in the stern which I said, that was fine.

I planned to get another couple hours in after the group paddle, so I got my C-1 ready to paddle after putting away the C-2. Lee Jarpey was going to paddle with Keith Canny after the group paddle, but there were some communication problems/issues. I notice that Lee hadn’t made it to the water and I didn’t see Keith anywhere. I asked Lee if he wanted to paddle some more and he said he did.

I put my C-1 back on the Suburban and got the C-2 down again. This was the first time I paddled with Lee. Lee didn’t want to go for the full 2 hours so we decided to paddle up the island and back down. I measured the distance to the island earlier in the week and it’s 4.5 miles upstream. 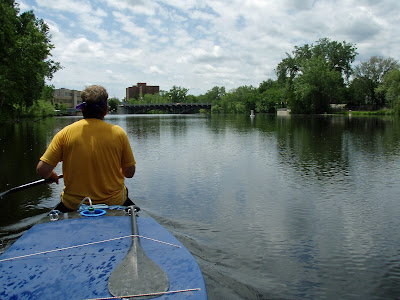 I was surprised how we got the boat flying on the water. It was a pleasure to paddle with Lee. We never made it up to the island. We turned around with some other boats coming back downstream. We continued down past the landing with Io and Joe Dunaisky to the dam and then back up. Lee and I finished our paddle in one hour and twenty-five minutes. My total paddle time today was 4 hours and twenty-five minutes.

While at the parking lot, Io and Dave Dahl planned to get an early start tomorrow. Dave had paddled his C-1 today. They planned to start at 0700 am. Actually Io and I were going to paddle before Dave spoke up. Since they were going to paddle tomorrow with the group in the morning I was without a partner until Julie showed up. I told them if they hear anyone who wanted to start early to let them know I was looking. I really knew that no one would be looking to paddle early, but on the off chance I told them.

I needed to mow the lawn before I did anything else. After the lawn was mowed it was time for a run. This was about my 6th or 7th run in four years. My last run was 36:11 so I thought I would go a little further. I’m trying to limit my running on any pavement so I’ve been driving to an area about a mile or two from home. This is a road that has gravel shoulders so it’s easier on my knee. I went for a total of 41 minutes. My right calf last time felt very tight and sore, but today it was fine.

Well, there was still daylight so on the Mountain Bike I climbed. I went my usual 20.7 mile loop through the Elm Creek Park Reserve. Time one hour and thirty-two minutes. 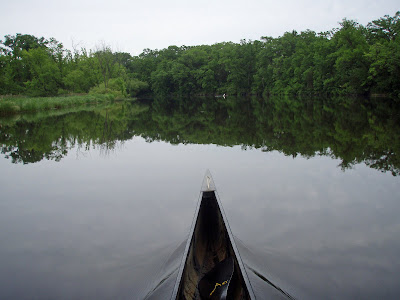 I planned to paddle my C-1 this morning. I was up before six am and there was a light drizzle. Oh, well…it was warm out.

Io Harberts was already in the parking lot at the Rum when I pulled in before 7 am. She had her cup of coffee in her hand and I was finishing my cup. The rain had stopped. It was cloudy, but it was a very nice morning. The river was calm.

I got my C-1 ready to go. Dave Dahl had pulled in the mean time. I decided to hit the water before they were ready. I wanted to take it slow and not be tempted to keep up with them in their C-2. They caught up with me before the bridge. Io told me earlier that she called Dave in the morning to remind him to bring shoes he could run in since they planned to do the portage. They went by me and headed to the portage. I followed to get a photo of them. I stayed on the water.

I met up with them after the portage when they paddled back for me. We talked about several different things while I rode their side wake. After an hour of paddling upstream it was time to turn around to get back to the parking lot by 0900 am. We saw Mike Davis and Steve Yurista each paddling their C-1’s on out way back.

We were at the landing five minutes before 9 am. I paddled for one hour and forty-five minutes. It appeared that everyone was almost ready to go. Julie untied my C-2 from my Suburban while I put the C-1 on top.

Julie was going to paddle the stern and I needed to move the foot brace closer to the seat. I haven’t needed to move the sliding foot brace this year, so I was going to get some tools out. Everyone had got to the river and started paddling. Julie told me she would paddle the bow but warned me that if her shoulder hurt too badly she would need to switch. We took the C-2 to the river and I thought I had a couple pieces on minicel foam in my Suburban. I ran up to my vehicle, but couldn’t find any. I grabbed another PFD in case Julie needed to switch ends and I could wrapped the PFD around the foot brave so she could push with her feet on the foot brace.

It wasn’t long before Julie’s shoulders began to burn so we needed to pull over and switch ends. The only place where we could pull over was near shore in about knee high water. We started going again when I notice that I needed to adjust the bow foot brace. I went a ways before I got a chance to do it. Once it was done then I was much more comfortable up in front.

We paddled within about twenty minutes of the 7th Av Bridge before some wanted to turn around. For some reason not very many people want to put in 3 hours of paddling. Going up the bridge and back takes about 2 hours and fifty five minutes with the water levels they are now. When Ed and I have been paddling without the group, we go up to the bridge and back, then we do an extra 5 minutes to get to the 3 hour mark.

We all turned around and headed back to the landing. Julie and I paddled for 2 hours and twenty-eight minutes together. With my time in the C-1 and with Julie I paddled for four hours and thirteen minutes.

Several of us went to Caribou Coffee for coffee after paddling. I didn’t stay very long because I needed to get home to have something to eat. I was planning on bike riding in the afternoon. I was going to go on my own before I met with the group that has been bike riding in place of their cancelled cardio kickboxing class.

I got in an hour of biking on my Mt. bike before the 3 pm meet with the group. My neighbor, John, was there with Steve. We were waiting for Erin and a couple of others to show up. A couple of other ladies showed up that I hadn’t met, one was Karen and I forgot the other ladies name who said it took her 28 minutes to ride from home. They were all talking about doing the LifeTime Triathlon in July before we headed off. 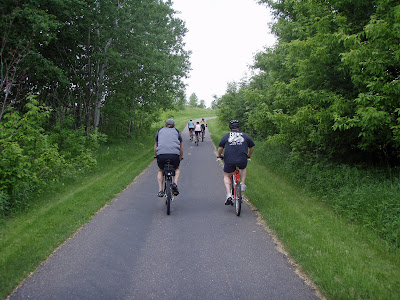 We started out doing the loop that we did last week through the park. Eventually the lady I can’t remember her name left us to go home when we were approximately half way through our ride. We continued on and after a short while I kept looking back for John and Karen but I never saw them. Steve, Erin and I stopped prior to crossing back over into the north loop. Erin called John on his cell phone and she was told they had taken a short cut to go back to their homes. 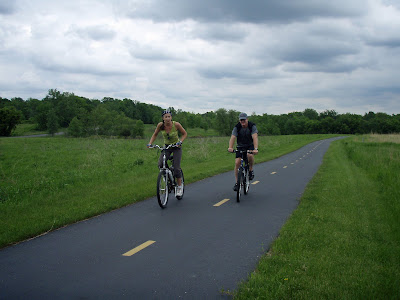 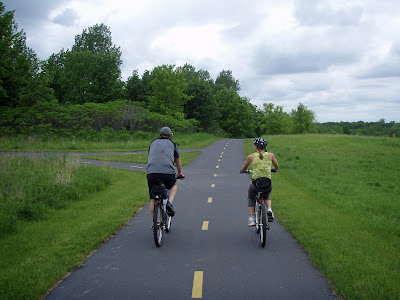 Last week when I was riding with Erin I told her that I had seen Julie (who was riding with us last week) a couple times at the club. Well, I kept saying to myself that Erin looked familiar also, but I wasn’t too sure. After last weeks ride I realized I have seen Erin many times while at the club during the past three years, but I’ve never talked to her. I usually saw her walking to the cardio room. When I’ve seen her biking she had her sunglasses on, her hair in pig-tails with a bandana on her head. She’s not dressed like that at the club and I’ve never seen her speak at the club. Her demeanor on the bikes is a lot different than when I see her at the club. She told me she is all business and is focused during her workouts and it’s not a social hour for her. I think the iPod has something to do with it, also. Again, I had a nice ride.

I work evenings for the next couple weeks. I’m paddling with Ed in the morning tomorrow and I’ve taken some time off the do the two Hoigaard races this week and next. I’m paddling with Devin Arenz this week. Kate Ellis and I talked about the next week, but I’ll have to call her and make sure she doesn’t have another partner.
Chuck Ryan
Posted by CIIcanoe at 9:56 PM