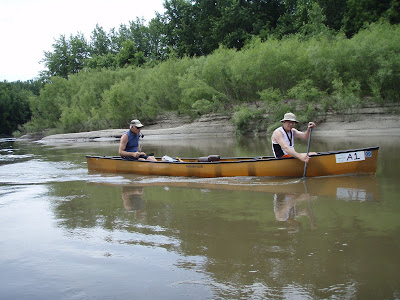 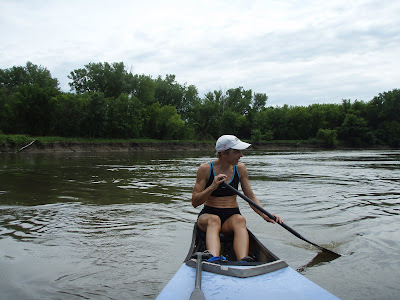 Kate Ellis asked me last Thursday at Hoigaard’s if I would be interested in doing a longer paddle sometime this week. Since I worked last Saturday I would have an extra day off this week which would be today, Thursday. I told her that I would like to get in a longer paddle.

I called Kate a couple days ago to see if she was still interested. We tentatively planned to do a 5 to 6 hour paddle on the Mississippi River starting in Dayton. Then yesterday she called me to tell me that Doug Berg and Keith Canny were going to paddle the Minnesota River and if I was interested in joining them. Sure…

We were to meet at 7 am at the north parking lot along the Minnesota River next to Hwy 101 in Shakopee, Minnesota. Doug’s wife would then shuttle us to La Sueur where we would paddle back down to our vehicles. Kate was told it would be about a 6 hour paddle. I’ve never been on this section of the Minnesota River and neither has Kate so we both looked forward to the paddle.

I got up at 0430 am and had my normal breakfast of oatmeal and coffee before getting on the road at 0535 am. I wanted to get on the road early to beat the morning traffic. Although it would only be some twenty miles or so I knew I would need some extra time because of traffic and the fact I’m always early.

Traffic wasn’t bad and about 40 minutes later I was on Hwy 101 approaching the bridge looking for a sign saying park or entrance to a park. Well, I kept looking to my right and really didn’t see any thing obvious so I drove to a Holiday Gas Station in Shakopee. I was told there were about three different parking areas. I drove back over the bridge over the Minnesota River and found a parking lot that would probably be where we would meet.

I was the first one there then Keith Canny showed up followed my Doug Berg. Doug Berg’s wife then showed up in her vehicle. Once Kate showed up we transferred her canoe to Doug’s vehicle and everyone put there gear inside. 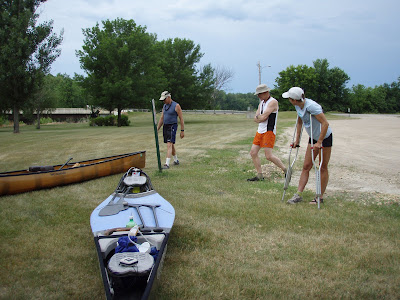 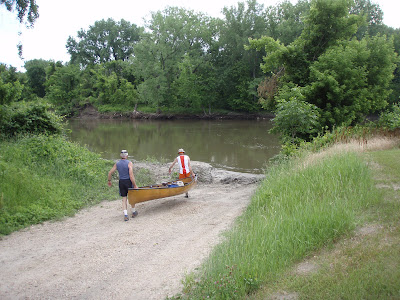 Doug drove all us to a park where we would put-in in Le Sueur which was at least a half an hour to forty-five minutes away by road from Shakopee. Doug also had a map of the section of the Minnesota River that we would paddle today. The map showed it looked like it was supposed to be about 56 river miles back to our vehicles.

While driving to Le Suer the sky to the west was getting dark. It looked like it could possibly rain upon us before we were done. The temperature was in the lower 60’s with little or no wind. We were on the water at 0814 am. I was told the water was higher than it normally is but I could tell the water had been much higher earlier due to the amount of erosion along the stream banks and all the sand and mud deposited along the shore line.

The water was swirling and there were some pretty big boils as we paddled down the river. It made the canoe dance as we went and I could hear Kate laughing in the stern. I asked her what she was laughing about and she told me she was having a tough time keeping the canoe straight due to the water conditions. That’s fine as long as she wasn’t laughing at me! 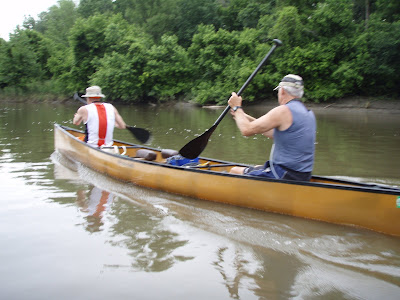 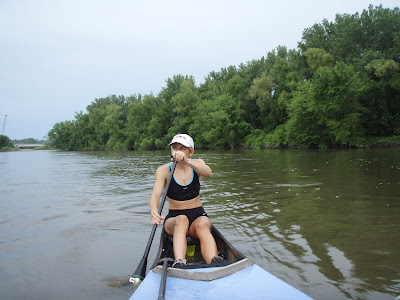 The cloudy skies made the first three hours or so of paddling very enjoyable. It wasn’t until about 37 miles from the time we started before we saw our first house along the river. Kate and I commented that the reason we hadn’t seen any buildings was probably because of the wide flood plain along this stretch of the river.

The second half of our paddle the sun began to peek out and it now started to get warm.

On this paddle I would experiment with what I would be drinking in the AuSable Canoe Marathon. I mixed up a bottle of Orange-Vanilla Perpetuem by Hammer Nutrition before the start. Since it has some protein in it and I didn’t want it to spoil I didn’t want to mix up my second bottle until I was ready for it. 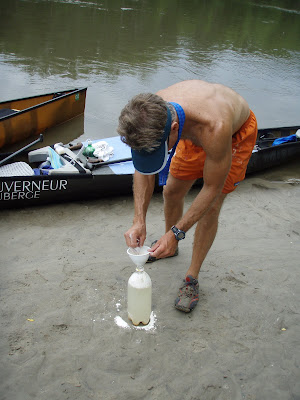 We pulled off onto a sandbar where I began this process of attempting to put in the mix in my second water bottle. Let’s say it was much more of an ordeal than I anticipated and I probably had as much mixed on my body as in the bottle.

Kate mentioned to me a few times this past week that she will sometimes bring a bagel with peanut butter on her longer paddles. I usually won’t bring anything dry like that because I have a hard time swallowing it if I’m exerting myself. Since I knew I would be able to stop and eat one today I did bring one. It tasted very good. I also used some Vanilla Hammer gel and I had a Protein Hammer Bar. I brought two bananas. I ate one and accidentally knocked the second one off the canoe cover into the water. 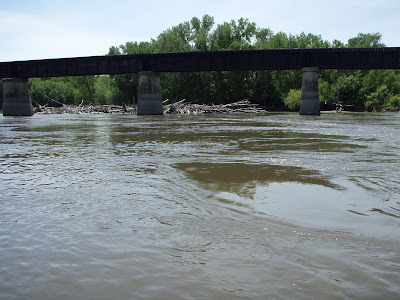 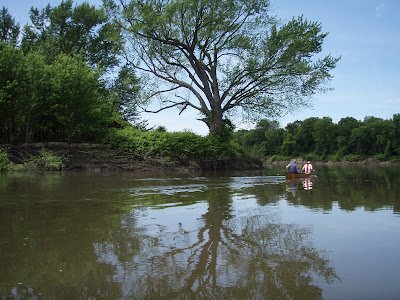 Since I brought my GPS today I was watching the time and the mileage as we went down the river. We arrived back to our vehicles after paddling six hours and twenty five minutes. The actual mileage was 47.34 miles not the 56 miles that we thought it was going to be based on information from the map.

We all headed to the Dairy Queen in Shakopee after we got the canoes back on the vehicles. I have a very enjoyable day paddling on the river. I want to thank Kate for paddling with me today and putting in a longer day. I want to thank Doug and his wife for the shuttle and to both Doug and Keith for keeping us company today.

I’m ready for another longer paddle when we can all get together again.

Tomorrow, I’m headed up to Grand Rapids. I will do the Black Barge Canoe Race in Cohasset on Saturday. Io Harberts wants to do an evening paddle so maybe that will take place Saturday evening. Al Rudquist and I are still planning on doing a longer paddle on Sunday.

Here is what I’ve been doing since I posted the photos that Anna Peterson took at Hoigaards on 06-19-0-08.

I never received the results from Hoigaard’s this week so there were no results for me to post.

I went for a 2 hour and twenty minute paddle on the Mississippi River in my C-1. Afterwards, I went running for forty-five minutes.

Only went for a one hour and twenty minute bike on my road bike after work. I didn’t paddle with the group this morning since I had to work.

The group wasn’t going to paddle until 9 am today. I decided to get some extra time in before I paddled with Ed Arenz at 9 am. I was on the water at 0645 am and got two hours of paddling in. Io Harberts and Natasha Canfield were going to start at 7 am so I turned around and paddled with them.

I was back in my C-1 for two hours and ten minutes on the Mississippi River.

I went and got a haircut after work so I decided not to paddle today. Instead I went for an hour run. This was my longest run since I started back running this year. Then I went to the health club to do some leg extensions, leg curls, abs, back exercises and stretches.

More paddling in my C-1. Two hours worth.

I’ve been busy at work this past week and with my outdoor activities I haven’t had time to sit in front of a computer.