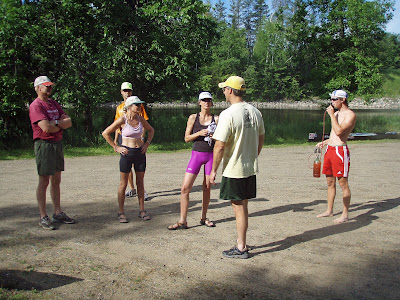 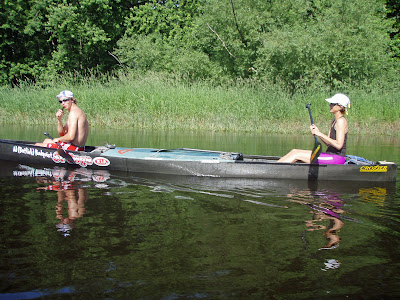 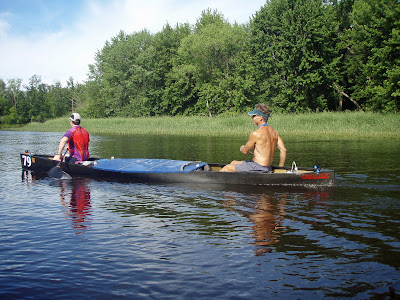 I called Al Rudquist at 8 am as planned to see where we would paddle today. If the wind wasn’t blowing hard we were planning to go to some Chain of Lakes about 10 miles north of Grand Rapids otherwise we would go on the Mississippi River.

The wind was blowing so Al told me to meet them at the Blackberry Bridge Landing at 9 am. We passed this landing during the night paddle last night.

There would be two additional people joining us this morning. Krista Matison and Maren Hagen. 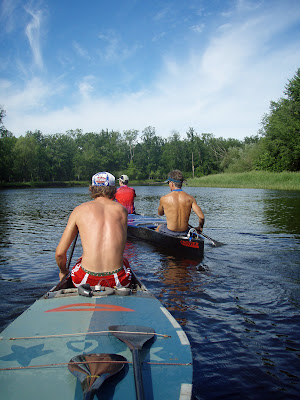 Maren and I would paddle together today. I actually met Maren in 2003 when Deighen Blakely and I met Theresa Alto and her to paddle from this same landing. 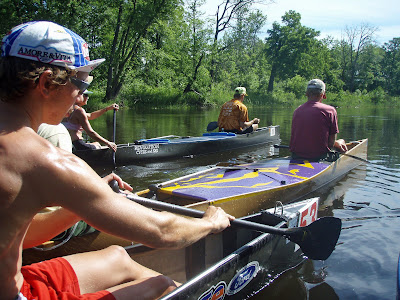 The sun was shining and it was just a nice day to be paddling. We went downstream for about one hour and fifteen minutes. This was about 10 minutes past the landing where we took out on our night paddle last night. On our way back upstream Krista was bonking so I gave her a Powerbar to eat. Then Dan Shaffer jumped in the bow of her canoe and Corey went from the bow with Krista to the stern with Al. Krista felt much better after eating some of the Powerbar and paddled on with a smile back to the landing.

Joe Dunaisky wanted to know if I would be doing a Point System for the canoe races like I did in 2003. Io Harberts also said she would like to see it done. I told them about some of the conflicts I had in the past about doing this so at this point I don’t think so , but I’ll think about it some more.

I told them about some other plans I have to have the racers interact more but I find the Minnesota racers are an independent group and they don’t necessarily do a whole lot of communicating outside a little group by e-mail or phone. Then there is the Minnesota Canoe Racers MSN site. I’ve never like this site because of a variety of issues and there isn’t much communication going on it, but when I wanted to move from this site there was resistance from a couple people so this site remained “active”. I don’t know if it will be worth my time and money to implement my plan, but it would benefit the racers, race directors and the general public.

We were back to the landing three hours and one minute after we started.

We will all be seeing each other next week-end at Al’s Round Robin on Ice Lake in Grand Rapids. See my earlier post on upcoming races for more details. Chuck Ryan
Posted by CIIcanoe at 9:07 AM