On Friday, 12-25-20, I went out to see if I could find "my" Great Horned Owl. We had a blizzard a couple days earlier, so I decided to haul my camera gear out in my sled. It was 12:30 pm when I left the house pulling the sled with the temperature at 5 degrees, but with light winds.

By 1 pm I was in the area where I wanted to go to start searching for the owl. I took a cell phone picture of a large oak tree with the conditions in the woods. I posted this picture that I was going to need some luck finding the GHO today. What I didn’t know there was a Great Horned Owl in that tree. When I spotted it it was already awake and alert. This was different…I wondered why?Normally, when I find the female GHO she is usually sleeping or she’s not overly concerned with my presence and lets me go about whatever I’m going to do which is take pictures of her.

I had left my camera gear on the sled, but I had my GoPro going when I found the male GHO in the oak tree. I watched a squirrel quickly approaching the owl in the tree. The owl flew off when it got too close. The owl didn’t fly far so I walked that way very slowly. I wasn’t exactly sure which tree it landed in so I kept scanning the area while slowly walking its direction. Well, while scanning the area I caught a glimpse of it out of my peripheral vision flying back the way it had come. I watched it as it flew back to the same oak tree where I first saw it.

I walked back to my sled going in a different direction from the owl. While at the sled I heard voices in the woods coming my direction. I didn’t want to move around with them coming my way. It was a two people with their dog. They finally spotted me, waved and then veered off. I figured the owl was probably no longer around, but I would take a look from a distance.

I didn’t see the owl so I glassed it. I still don’t see it. I spent at least 10 minutes looking the tree all over, but the owl must have flown off again.

The conifer where I normally can find the female GHO was nearby, so I walked in that direction and glassed it. Basically all I saw was snow on a conifer. I walked in a wide semi-circle to the back of the tree coming across a deer bed, but now I can make out the back of the owl. It was difficult to see her, but I could tell she wasn’t alarmed and this was a different GHO.

Right away I knew this was the female owl, who I call “Hoot”, who is much bigger in size that her male friend, “Give a Hoot” She definitely wasn’t the owl in the oak tree so that had to be “Give a Hoot” the name I gave the male GHO. The few times I’ve seen “Give a Hoot” he has been very active during the daytime. He doesn't usually stick around, although today he flew off as the squirrel quickly approached him.

I walked back to my camera/tripod and took it to the area where I should be able to get the best shot. I tried looking with my eyes and all I saw was snow on a conifer. So I glassed the conifer again…same thing, snow on a conifer. I spent several minutes looking through my binoculars looking for the owl that I know was in the tree. Eventually, I located her, but I really don’t have a good shot of her. Based upon my prior photo sessions with her I know she won’t be fully alert until shortly before sunset. So today I'll have a couple hours with her before she is fully awake.

Although I took several images of her there’s not much differences in the images because she was tucked in behind the snow on the branches. I decided to take more video of her to show more of her behavior. Over 2 hours later she woke up and started going through her wake up routine that I’ve witness in the past.

I was watching her through my viewfinder at 3:50 pm when she began hooting. I quickly reached up and thought I hit the record button for the video. I missed her four hoots in the span of five minutes. My hands were pretty cold when I thought I hit the record button on the camera. I was so intent on watching her call that I didn’t realize I wasn’t recording. While listening to her call, I could faintly hear “Give a Hoot” calling back in the distance.

Once I realized I wasn’t recording I turned the video on and double checked it to make sure it was now recording. It took her a while to call again, but I got to watch her do her normal owl routine while waiting. The more she called the closer “Give a Hoot” was heard in the distance, but I never saw him.

“Hoot” ended up flying to two different trees after leaving the conifer, but she continued to call "Give a Hoot" many times. He was getting closer and closer. I’ve heard “Hoot” make calls, hoots and screeches, in the past; but this was the first time I saw her do it in person. Also, the first time I’ve heard then both talking to each other. I heard “Hoot” call about fifty times. It was a magical time in the woods! While I was packing up my gear the two love birds were still hooting back and forth to one another…

I know the video is very long, but I found watching “Hoot” ’s behavior very fascinating. You can skip the first part of the video where I was searching for her and go to 6:42  which is the time I found for to watch her behavior, including the one leg stretch, and listen to the both of them calling one another. 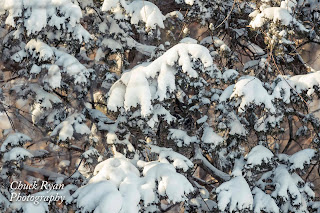 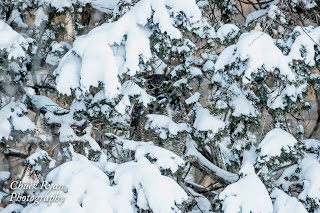 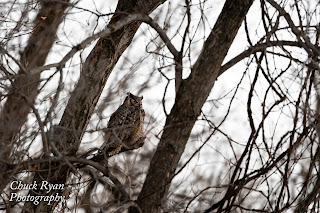 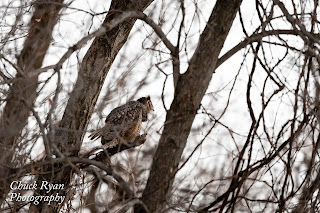 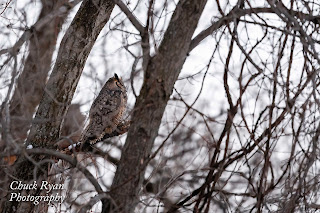 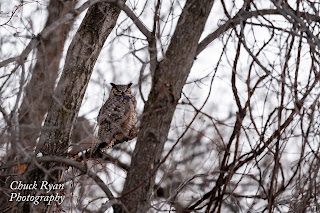 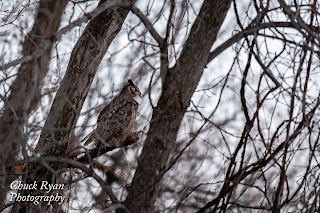