Hey, is that you! …and Oh, where did you come from…

I was going to walk around in another area of the woods today, but I ended up back walking in the area of the owl.

I checked a couple of her known hang-outs and on the way back I spotted what I thought might be her in a Northern White Cedar. Most of what I saw were branches but when I looked through my binoculars I could see the tufts of feathers on her head.

I had to get out my camera and tripod, although I knew from my location that it wouldn’t be a good shot. Since I shoot a 500mm f/4 lens , Nikon D6, tripod with a gimbal its not the easiest thing to maneuver, so I try to get a couple shots of the owl then work my way to a better spot if I can. I included one of those first shots of her before I moved. Sometimes that entails going a pretty good distance, like today, out of my way so as not to disturb her.

I would have like to have the owl with the sun or brighter sky behind me, but she was facing the wrong way which wouldn’t be much of a problem except there were just as many if not more branches in the way. So I had to make my way around the other way so I would be looking into the brighter sky/sun.

I got in position and took a couple shots before I noticed I had a branch in front of her face. I couldn’t see the branch when I was looking with only my eyes.  I decided to move my tripod just to my right a little when I saw her open her wings to fly off. I couldn’t get the tripod set in time to get a shot of her.   I watched her fly off.

Now I had to go get my backpack that was laying somewhere upon the top of a steep incline, so I decided to walk toward the cedar tree when a second owl flew off. I never saw the second owl in the tree. Based upon the size I believe I been photographing this female this year and the second owl today was a smaller male which I don’t think I’ve seen before. This was the first time I saw them together. 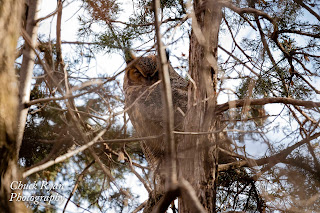 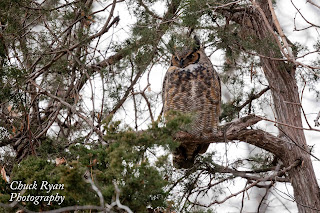 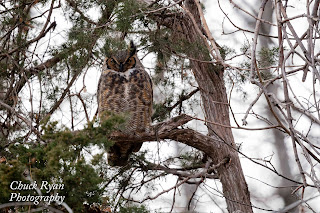 and a female Pileated Woodpecker from today... 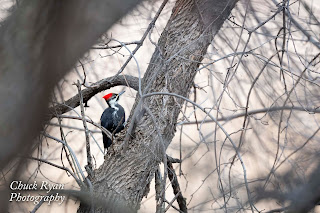