Midwest Mountaineering here in Minneapolis had there 48th Bi-Annual Adventure Expo this week-end.

There were a couple of presentations that I wanted to seethis year. One of them was to listen to Claire Quewezence, Assistant Park Superitendent, of the Woodland Caribou Provencial Park. http://www.ontarioparks.com/english/wood.html . The other one I wanted to see was Phil Cotton (Uncle Phil) and Barry Simon give their talk about “The Wabakimi Project”. http://www.wabakimi.org/project/ 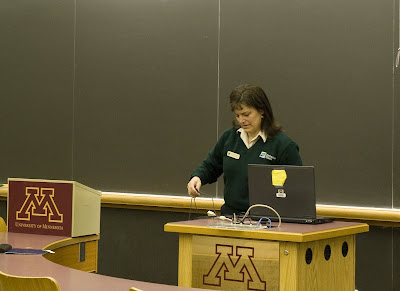 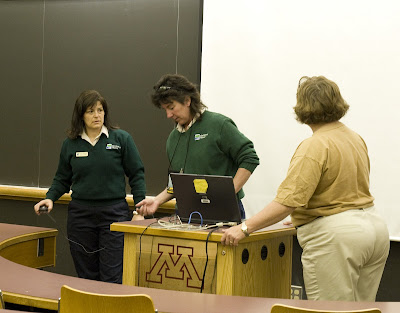 Claire and Barb
Back in 1997 I was going to paddle the Bloodvein River from the east side of Woodland Caribou Park to Lake Winnipeg with a group, but it was cancelled. I continued to paddled other places and race canoes; then the last few years I started thinking about paddling the park again. Last year I was planning to do a trip in June, but I decided to race the AuSable River Canoe Marathon, a 120 mile canoe race in Michigan, instead.

Well, this year it appears most of the canoe racers around here already have their partners for upcoming season so after last week-end I decided to take about a 10 day solo trip to Woodland Caribou. A couple weeks ago I put in for 12 days vacation just in case I decided to go. Well, it’s pretty much has been decided, it’s a go. I leave June 11th for 12 days.

I don’t have my exact route plotted out yet, so I have to figure that out soon. Dave Phillips from Virginia sent me a copy of his maps with the route he took on his 10 day solo trip to Woodland Caribou last year. I briefly looked at his maps and his daily narrative that I received in the mail yesterday. I may go to some of the same lakes but I probably won’t do the same route.

Anyways, that is why I wanted to see Claire speak. Her presentation was at 0915 am. Of course, I was there by 0830 am and I was in the room by myself waiting. Claire arrived by 0845 am so I got to speak to her before everyone else got in the room. I also spoke briefly with Barb who works for Ontario Parks out of Thunder Bay. 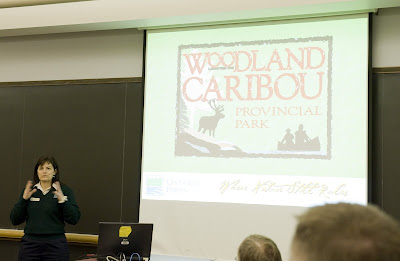 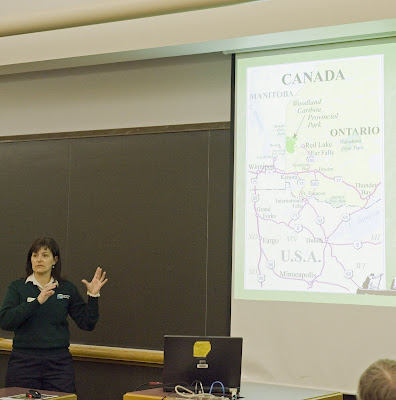 Claire
The next presentation in the same room was Barry and Uncle Phil. I met Phil last year when he was returning from the bush on the Beaver with Dave Phillips at Mattice Lake Outfitters the day before Dave, Pete, Dick and I went on our 15 day Wabakimi trip. I’ve corresponded with Barry a couple times in the past via e-mail, but never had met him.

I have no immediate plans to go out with them, but I wanted to hear their talk.

Dave and I are planning a 3 week trip back to Wabakimi starting around August 15. We have posted a message on a couple of different websites/ forums looking for a couple more experienced paddlers for the trip, but so far no takers. 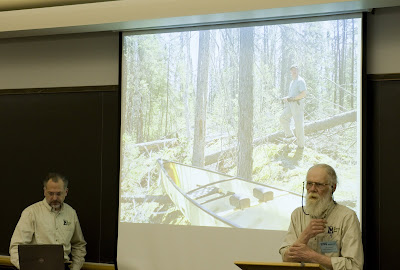 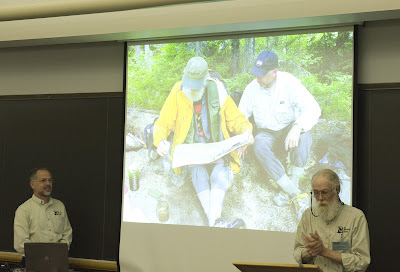 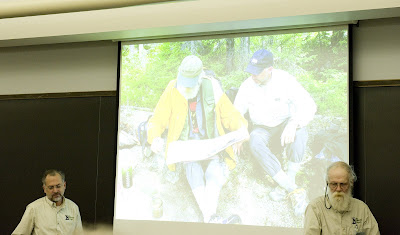 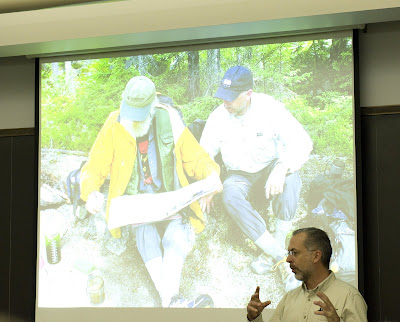 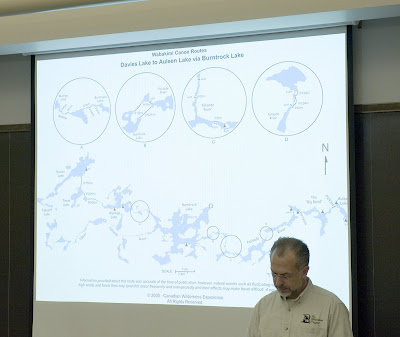 Barry
I would have seen Kevin Callan speak but he was scheduled at the same time as “The Wabikim Project” presentation. I did see Kevin later but only to say hi. There was a lady telling him a story so I left and when I came back he was gone. 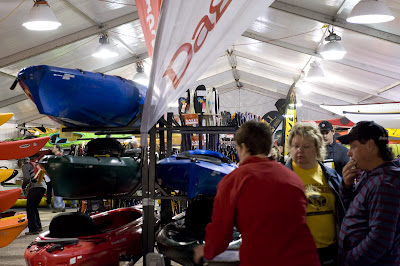 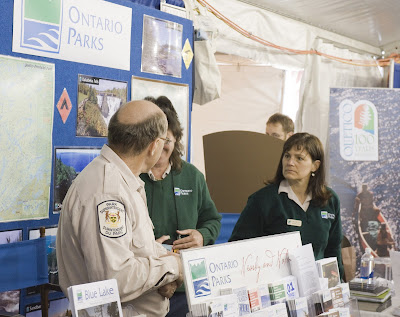 The two main booths I stopped at were the Woodland Caribou (Ontario Parks) and The Wabakimi Project.

I bought another waterproof map of Woodland Caribou and picked up a nice booklet about the park. Thank you, Claire, for that booklet.

I picked up another overview map of Wabakimi prior to going to Uncle Phil’s booth. When I got to The Wabakimi Project booth I found a very large Wabakimi Canoe Routes Planning Map. I paid for it ( $50) and left it at his booth with my other large map while I continued to look around.

After looking around a while I decided to buy a MSR Hubba Hubba tent and a 20 degree down sleeping bag from Western Mountaineering, Ultralite model.

I thought I better go home with some change in my pocket. 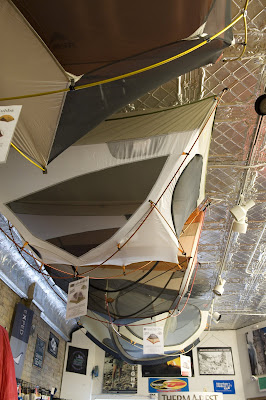 I got home and paddled for 2 hours and 40 minutes on the Mississippi River.
All the inside photos needed to be taken with a very high ISO setting. Better to get the photo than no photo!

Tomorrow is going to be a long day. I’m going to try and get a couple hour paddle in the morning , then I have a 4 hour shoot at noon with the Strobist group http://www.flickr.com/groups/mnstrobist/discuss/72157614031986190/
and at 7pm I do some night photography for about 4 hours. 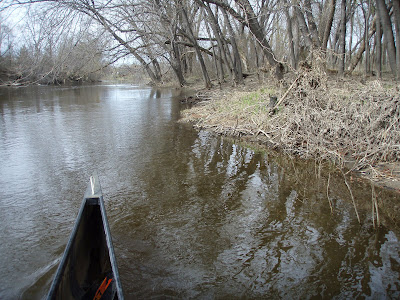 This little guy was so exited to see me that he came running right up to me! 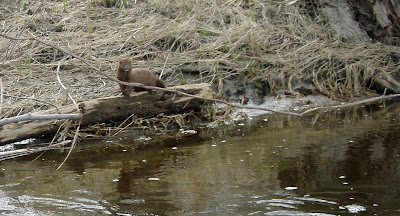 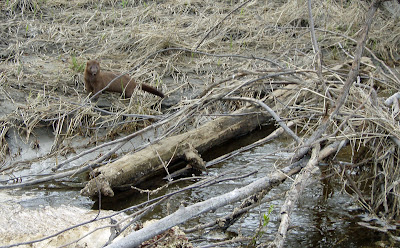 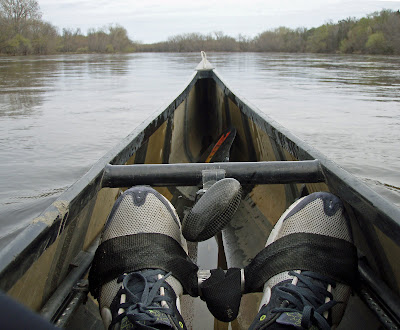 Chuck
Posted by CIIcanoe at 8:53 PM