These aren’t the best images, but if I didn’t post these then I wouldn’t have anything to post today.

On Tuesday, 02-01-22, I walked out in the woods looking for Hoot. While I was walking to the area I saw three deer bedded down. I usually forget to mention some of the other wildlife that I see while out with the owls. A couple days ago I saw three very large bucks that still had their antlers attached.

I got to Hoots territory where I eventually spotted her in the same perch for the ninth time in the past month. She had her back to a large oak tree to stay out of the strong wind. This is the perch that has several unwanted branches that are in front of her face, so I wasn’t going to get my camera out to take any photos. I watched her through my binoculars for several minutes. She was sleeping and never opened her eyes to look at me. I’m sure Give a Hoot was close by, but I wasn’t going to go look for him.

I turned around and decided to go look for Benny the Barred Owl. After searching some of his area and not finding him I decided to go see if the deer were still bedded down.

The deer were still there, but they were bedded down in some heavy brush. I knew I wasn’t going to get any great shots, but I wanted to see what I could get. I started walking from about 25 yards to where I got to about 7 yards to get the deer head shot. It took a few shots because it kept moving its head around trying to figure me out. It seemed like I was so close that I could reach out and pet it. 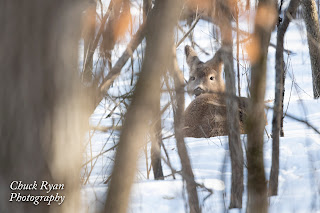 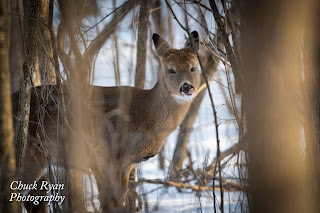 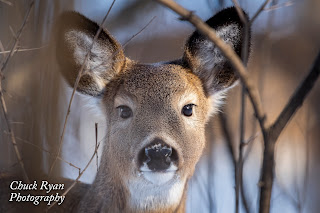